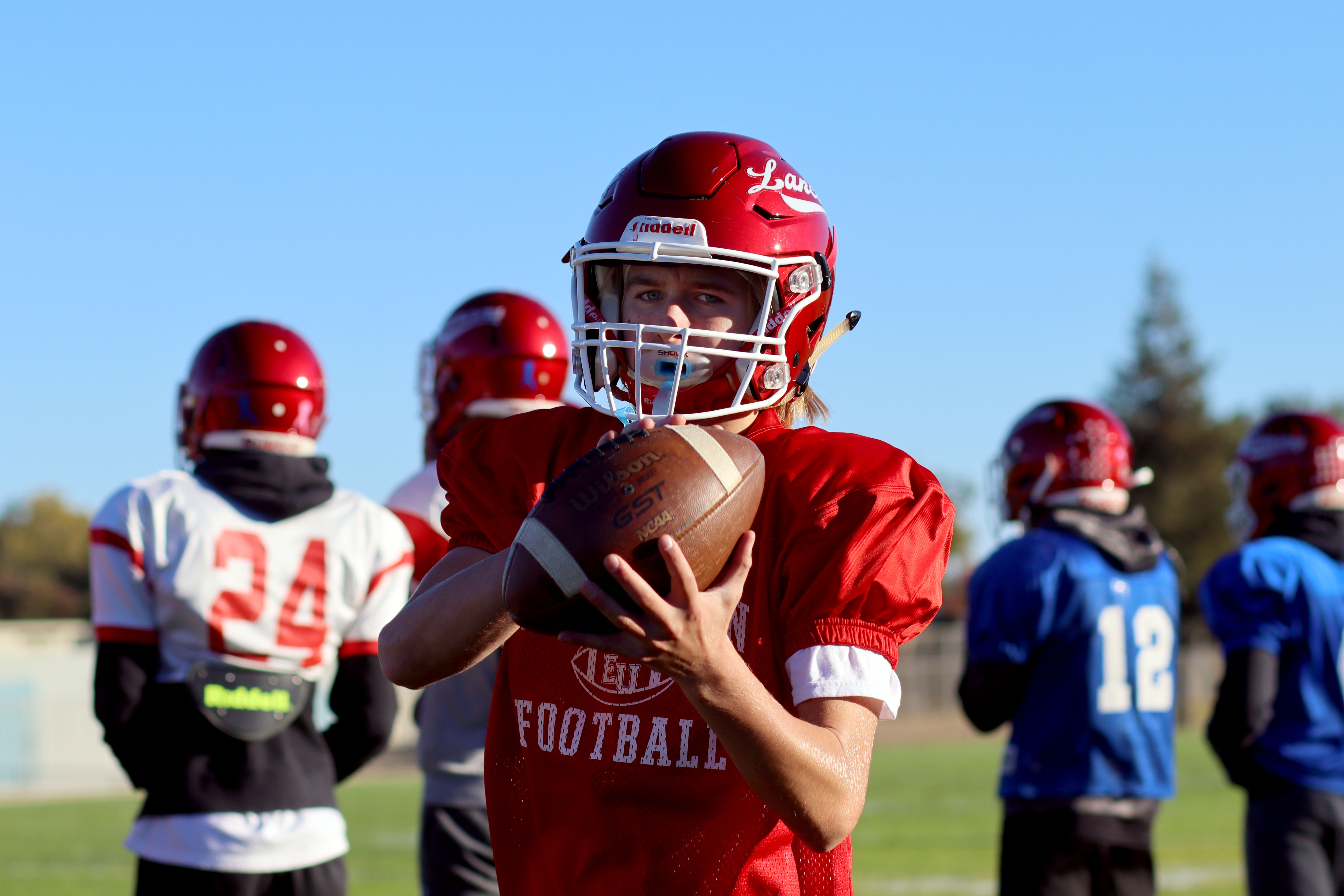 Here he was, a 140-pound freshman for East Union High, promoted after a successful season on the freshman team, and he felt predictable anxiety as he stood in the backfield last Friday night against Kimball.

Then the first snap flew over his head, he was smashed to the ground, and Kimball scooped and scored.

The Lancers eventually lost 36-30, but Simoni didn’t flinch. He threw for 175 yards and one touchdown and was a drop away from a second. He also threw two interceptions – one in the final moments – but second-year coach Mike Kuhnlenz clearly liked what he saw.

“It was pretty cool to be out there with the varsity players,” Simoni said this week. “There were obvious adjustments I had to make, but the guys and the coaches helped me a lot. I give credit to them because they helped me get through it.”

Simoni, the son of first-year East Union principal Eric Simoni, does not scare opponents with his physical presence. He looks and talks like, well, a freshman. He’s ahead of the game, however, because he knows the offense and – remember the first play last week? – he doesn’t panic.

“He has poise in the pocket and looks down the field for his guys,” Kuhnlenz said. “He’s an extremely smart kid. It was a no-brainer for me having him out throwing the ball to No. 1.”

“No. 1” is senior Dylan Lee, who at times single-handedly carried the Lancers through their 4-6 season. All he did was pass for 1,080 yards and 11 touchdowns, rush for 694 yards and eight touchdowns and made 18 receptions for 298 yards and two touchdowns. He also threw his 6-foot-2 215-pound frame around the field on defense.

Trouble was, Lee – who rewrote all the school pass-receiving records last season -- had to take most of the reps this year at quarterback. EU coaches monitored Simoni’s progress and finally pulled the trigger last week. The East Union freshmen, no doubt their best football class in many years, went 9-1 and shared the Valley Oak League title with Manteca and Oakdale.

How he’ll fare in the postseason remains to be seen, but the Lancers played one of their best games last week.  This much we know: A freshman making his second start at quarterback is a fascinating development going into the playoffs’ first week.

“It doesn’t really matter who’s throwing the ball to me,” Lee said. “I don’t really worry about the age (of the QB), as he long as we get it done.”

The Foothill Valley League League was dominated by unbeaten Placer and runner-up West Park of Roseville, while champion Central Catholic and runner-up Manteca were the best of the Valley Oak League.

The committee rewarded the Lancers due to their difficult schedule which included 10-0 Downey and Lincoln of Stockton.  The Miners lost four straight but squeezed into the bracket with easy wins the last two weeks over Oakmont and Ponderosa.

“All the athleticism and speed we saw against Downey and Lincoln prepared us for this week,” Kuhnlenz said. “Nevada Union is similar to us. They spread it out and have some athletes. We don’t expect them to drive two hours to get here for nothing.”

And now a kid with braces on his teeth will call the signals.

“I felt like I got a little more comfortable in the second half (against Kimball),” Simoni said. “It was still difficult, but I felt like I improved.”

The Division V-II bracket will not begin until Friday, Nov. 11. Top-seeded Ripon Christian will be at home against Rio Vista, while No. 2 LeGrand welcomes Delta of Clarksburg. No. 6 Gustine visits Woodland Christian. Stone Ridge Christian of Merced, the Central California Athletic Alliance League champion, is seeded fourth and will face Mariposa County.

For a look at all seven section brackets, visit cifsjs.org.