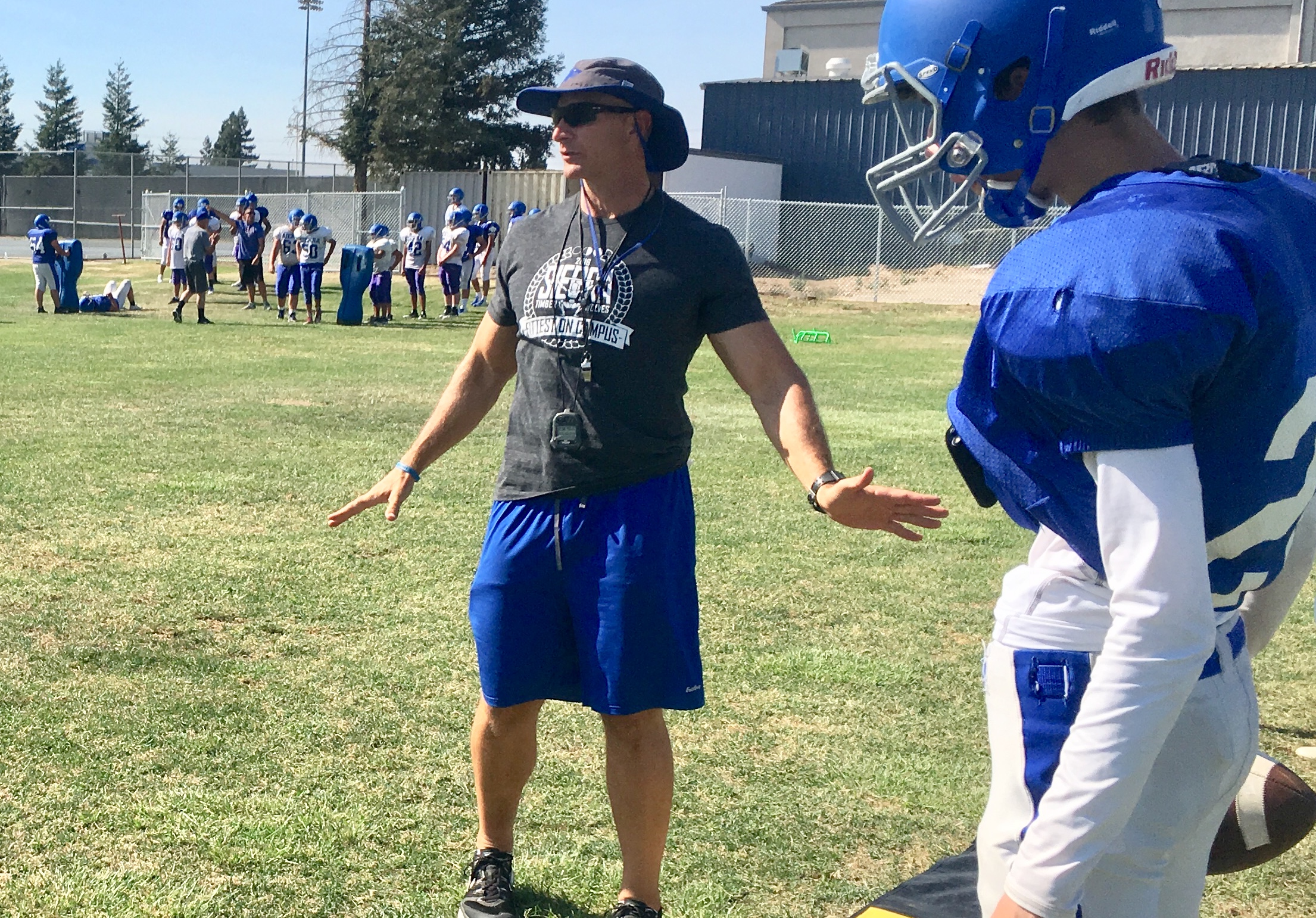 Sierra High football coach Chris Johnson teaches the nuances of the option offense to quarterbacks at every level in the program during practice on Wednesday, Aug. 1, 2018. (James Burns)

The practice field at Sierra High represents the family-first atmosphere that has become a hallmark of Chris Johnson-led football programs.

All three levels practice together, sharing equipment and coaches. It’s a method Johnson hopes strengthens the bond between levels and teammates, and on this day, it's working. Freshmen and junior varsity offenses pour over the intricacies of the option offense with Johnson and lower-level coach Jeff Abrew, while the linebackers practice pursuit with varsity assistant Mike James.

In opposite corners of the field, DBs and linemen also labor in the heat.

In the same breath, Johnson, biceps bursting out of the sleeves on his shirt, might teach a freshman QB how to read the edge rusher and a sophomore signal-caller how to complete the pitch.

“It’s like shooting a free throw,” he says, flicking his wrist, “or turning a double play."

Johnson developed this all-for-one, one-for-all approach with much success at Ripon High, where he helped turned the Indians into one of the region’s toughest small-school programs.

It has taken Sierra more than a year to warm to Johnson’s system and style, though, and their struggles played out under a spotlight in 2017.

Quarterback Nick Stanley, who was thrust into the starting lineup after Jacob Peterson suffered an injury, said Johnson’s arrival split the locker room into two camps.

There were those that welcomed new leadership, and those that wished Jeff Harbison, the architect of that state title team and the program’s all-time winningest coach, hadn’t resigned.

“There’s a brotherhood now,” said Stanley, whose versatility has been put to the test. In three seasons, he’s played three different positions for the Timberwolves, including wide receiver, quarterback and now running back. "Last year, I can’t say I had a lot of people who would fight for me or have my back. This year I can say that about most everybody.

“Energy vampires, we don’t have that anymore — people who just suck the life out of a game and put people down. We don’t got that.”

Senior wide receiver and defensive back Carlos Tovar stops short of a bold prediction, but insists the camaraderie that defined Sierra’s magical state run in 2015 has returned.

Tovar says the mantra is “one game at a time,” and Johnson returns to his Trans-Valley League roots in the season opener at Modesto Christian, a reigning TVL champion and Division VI section finalist.

The Crusaders boast a small but talent-rich roster that includes quarterback Hayden Sauser; defensive end Xavier Carlton, a highly touted prospect with an offer from Notre Dame; and running back Isaac Schinnman.

"Sierra football is completely changed,” Tovar said. "Last year, we were broken up, but this year we’re more of a family. We’ve come back together.”

Johnson is in this 19th season as a high school head coach. He was 77-54 with two TVL titles in 12 seasons at Ripon, his alma mater. He was also named the Sac-Joaquin Section’s Athletic Director of the Year in 2010. In an article in the Manteca Bulletin, Johnson said he returned to coaching to reconnect with the students and the community.

“People who are here now have been more accepting of him,” Stanley said. "People last year didn't want to accept him because they wanted the last year’s coach (Harbison).

"This year, everyone’s under his wing."