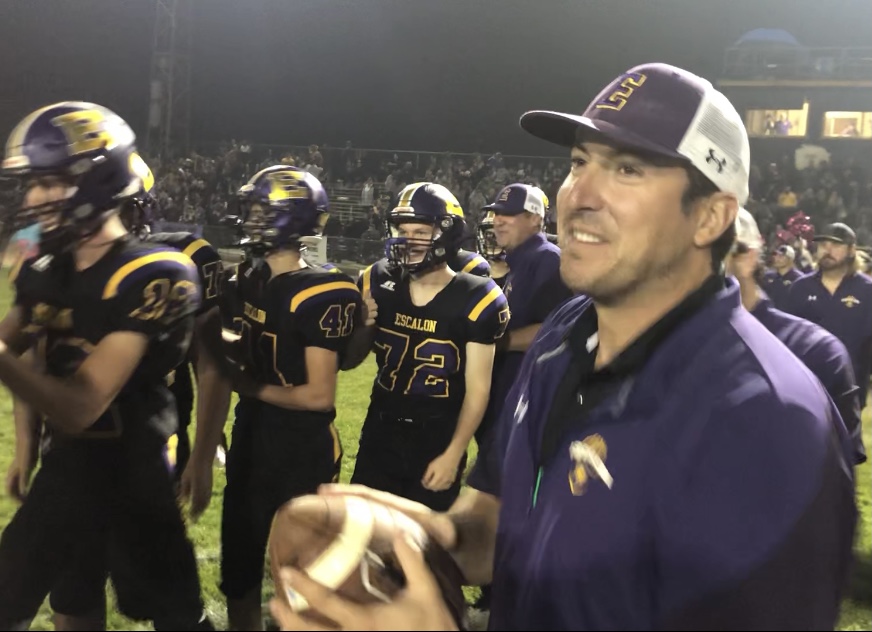 ESCALON — In 2018, Escalon High’s freshman football team posted a 1-9 record. Three years later, those same freshmen, now seniors, are 9-1 and 6-0 in the Trans-Valley League after a 33-26 victory over Livingston at Lloyd Engel Field on Friday night.

The outright TVL title is the Cougars’ first since 2011.

“Hats off to all those seniors that stuck it out these four years,” said Escalon head coach Andrew Beam, who improves to 34-6 since taking over the program in 2018. “On their final night at Engel in the regular season, they’re leaving this place the champs when I don’t think myself or anybody else in this league thought that anybody would be the TVL champ and undefeated.”

Escalon will now wait to see where it will be seeded in the Sac-Joaquin Section Division V playoffs. All indications are that a No. 1 seeding is on the horizon. Livingston, meanwhile, is expected to drop into the Division VI bracket where it could make some noise. The battle-tested Wolves lost four games this season: a non-league game to Livermore, a D-II team in the North Coast Section; and league games to Hilmar, Ripon and Escalon, all recent state champions.

“That’s a really good team that’s going to make some noise in that Division VI playoff,” Beam said of Livingston.

The Sac-Joaquin Section will release playoff brackets on Sunday.

After battling to a 13-13 tie in the first half, the Cougars embarked on a quick five-play, 50-yard drive that was capped Donovan Rozevink’s 3-yard TD pass to a E.J. Lewis that made it 20-13.

“We just had to settle in and get some energy behind our sideline, and in the second half we were able to do that,” said Beam. “We talked about it at halftime. We get the ball; if we can make them chase us, and put the pressure on them, you know, that’s where a team that has been there before finds success.”

The Cougars’ defense forced Livingston to go three-and-out on the ensuing possession and then Rozevink led another efficient drive, going 66 yards on eight plays, hitting Owen Nash from 6 yards to make it 27-13 with 1: 43 remaining in the third quarter.

Wolves quarterback Rocklin Baptista hooked up with Omar Baez on an 18-yard scoring strike that halved the lead with 10:42 remaining in the game.

Escalon extended the lead again to two scores, 33-20, when Ryker Peters Mack-trucked his way into the end zone from 10 yards out with 7:28 to play.

Livingston countered just over 3 minutes later when Flavio Aguilar hauled in a 10-yard pass from Christian Alvarez on a double-reverse that made it 33-26 with 3:59 to play.

On the ensuing kickoff, Livingston kicker Cain Ambriz pooched the kick into no-man’s land and Christian Tonoco bobbled the ball in his attempt to field it. Livingston recovered at Escalon’s 31, but turned the ball over on downs and the Cougars were able to run out the clock.

“Our boys fought hard,” said Livingston coach Alex Gonzalez. “Looking forward to learning from this game and, hopefully, our boys can go deep in the playoffs with the experiences we had in the TVL.

“Major props to the Escalon coaching staff and to their players, especially.”