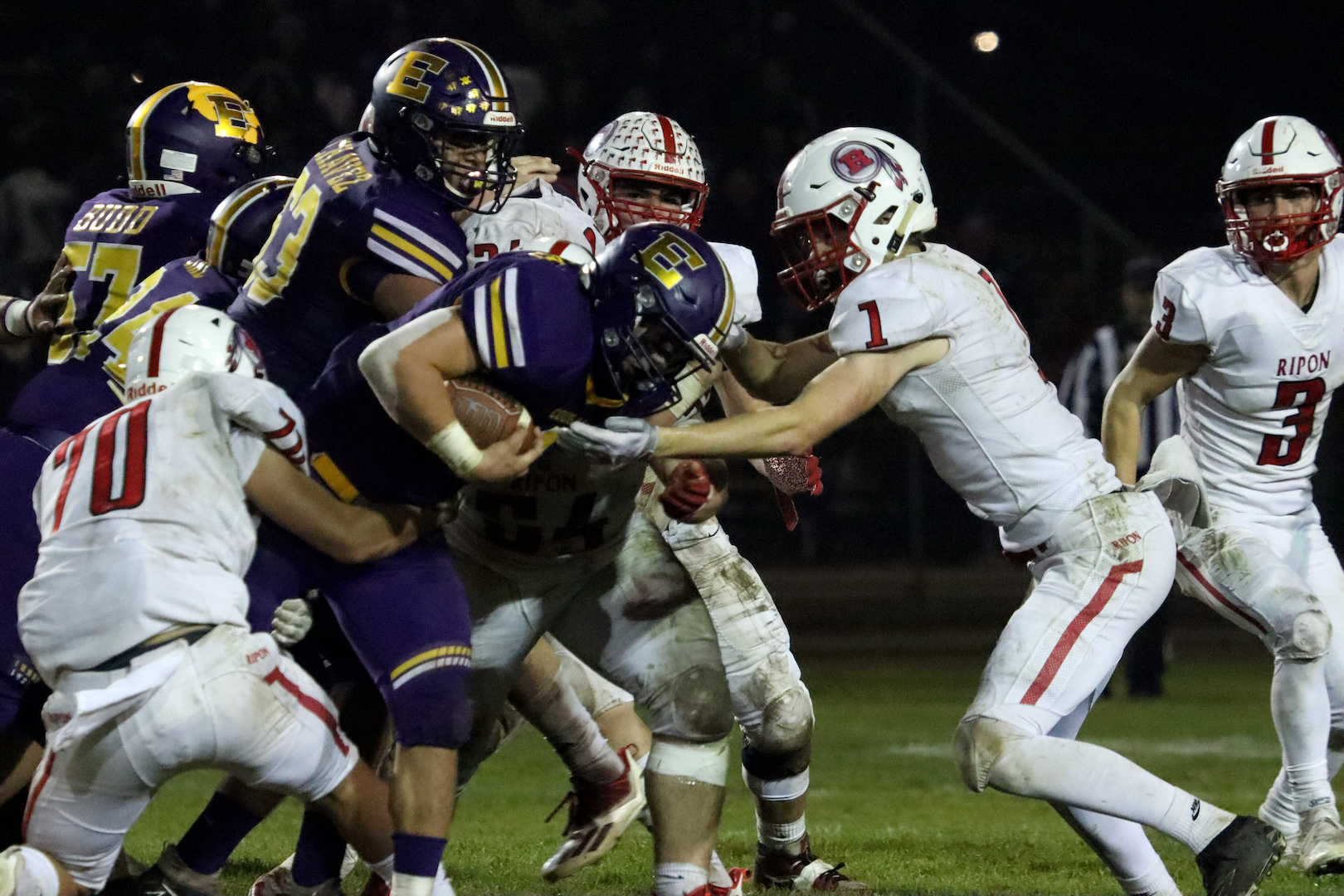 Escalon's Ryker Peters bulls his way for a gain against Ripon in the Cougars' 34-10 victory over the Indians in the Sac-Joaquin Section Division IV semifinals on Friday, Nov. 19, 2021, at Lloyd Engel Field in Escalon, Calif. (Samantha Schmidt/Front Row Preps)

ESCALON – The soft, shaggy and uneven turf of Engel Field must feel like a golden path to the Escalon High Cougars. To most of their visitors, it’s just a road to nowhere.

Archrival Ripon has made three trips to that imperfect sod over the last eight months, and the Indians motored home 0-3.  Friday night’s 34-10 loss, this one in the Sac-Joaquin Section Division V semifinal, will leave a larger scar than the others.

“I’d rather not come here again for a while,” Ripon coach Chris Musseman admitted.

Escalon (11-1), the No. 1 seed as the Trans-Valley League champion, looked the part in front of a capacity crowd. The Cougars, comfortable and confident, gradually pulled away on two touchdown passes by sophomore quarterback Donovan Rozevink and two rushing touchdowns by junior Ryker Peters.

By game’s end,  they outgained Ripon 435-189 and did not commit a serious error. A 17-10 halftime lead mushroomed into a night of dominance.

The only “everybody” left in the division is Hilmar, another familiar TVL power which advanced by beating Casa Roble 41-8.  The Cougars and Yellowjackets will meet Saturday at 6 p.m. at St. Mary’s of Stockton for the D-V championship.

“It’s going to be a slugfest. I don’t think anyone anticipated anything different than one or two TVL teams (in the final),” Beam said. “The kids on both sides are awfully lucky.”

Escalon, which built a quick two-touchdown lead to beat Ripon 21-7 a month ago, was met immediately with fierce resistance in the rematch. Ripon (8-5) marched for seven long minutes on its first possession but stalled three yards short of the goal line, and Jesus Ochoa connected on a 22-yard field goal.

That turned out to be the Indians’ best drive. They were limited to only 78 rushing yards, not sufficient to push Escalon out of its comfort zone.

Escalon’s quick response became one of the game’s themes. Rozevink looked to his left then shifted his vision to the right and found Logan Anderson for the 20-yard score.

Ripon countered with a special teams gem to lead 10-7. Jack Manning fielded Alfonzo Gonzalez’s low punt on the bounce and found a lane to his right, then cut to his left and finished off a 78-yard return for the Indians’ only TD.

Escalon’s fast answer was a harbinger. Only three snaps later, Peters burst to his right and outran the Ripon secondary for the 44-yard touchdown that put the Cougars ahead to stay.

“After that punt return, we had to come back with the momentum,” said Peters, who carried 22 times for 143 yards. “When the line blocked all the way down the field for the touchdown, I knew we had the momentum back.”

Peters, a 190-pound force at linebacker, has blossomed into a powerful fullback in the playoffs.

“We always knew he was an instinctual defensive player, but playing fullback was not natural to him,” Beam said. “Thank goodness he is figuring it out.”
Gonzalez’s dependable left foot also kept Escalon in control. Gonzalez booted field goals of 30 and 38 yards, the latter early in the second half for a 20-10 lead, and all four conversions.

Ripon quarterback Adam Barrera, forced to throw more than the Indians wished, was intercepted twice in the second half. Peters shook off an ankle tackle and dashed 4 yards to the corner to cap a 60-yard drive as Escalon extended to 27-10.

Rozevink applied the final blow with a 56-yard strike to 6-foot-3 Owen Nash, who reached high to pull it down and raced to the end zone.

Fittingly, the game ended on the goal line as Rozevink took a knee three times rather than pile on a needless score.

“We feel great but the job is not finished,” Rozevink reminded.

The Cougars must leave their friendly home to claim another title. Which is exactly what Beam, the Escalon quarterback 16 years ago, did to win a blue banner.

The opponent that day in Stockton? Hilmar.