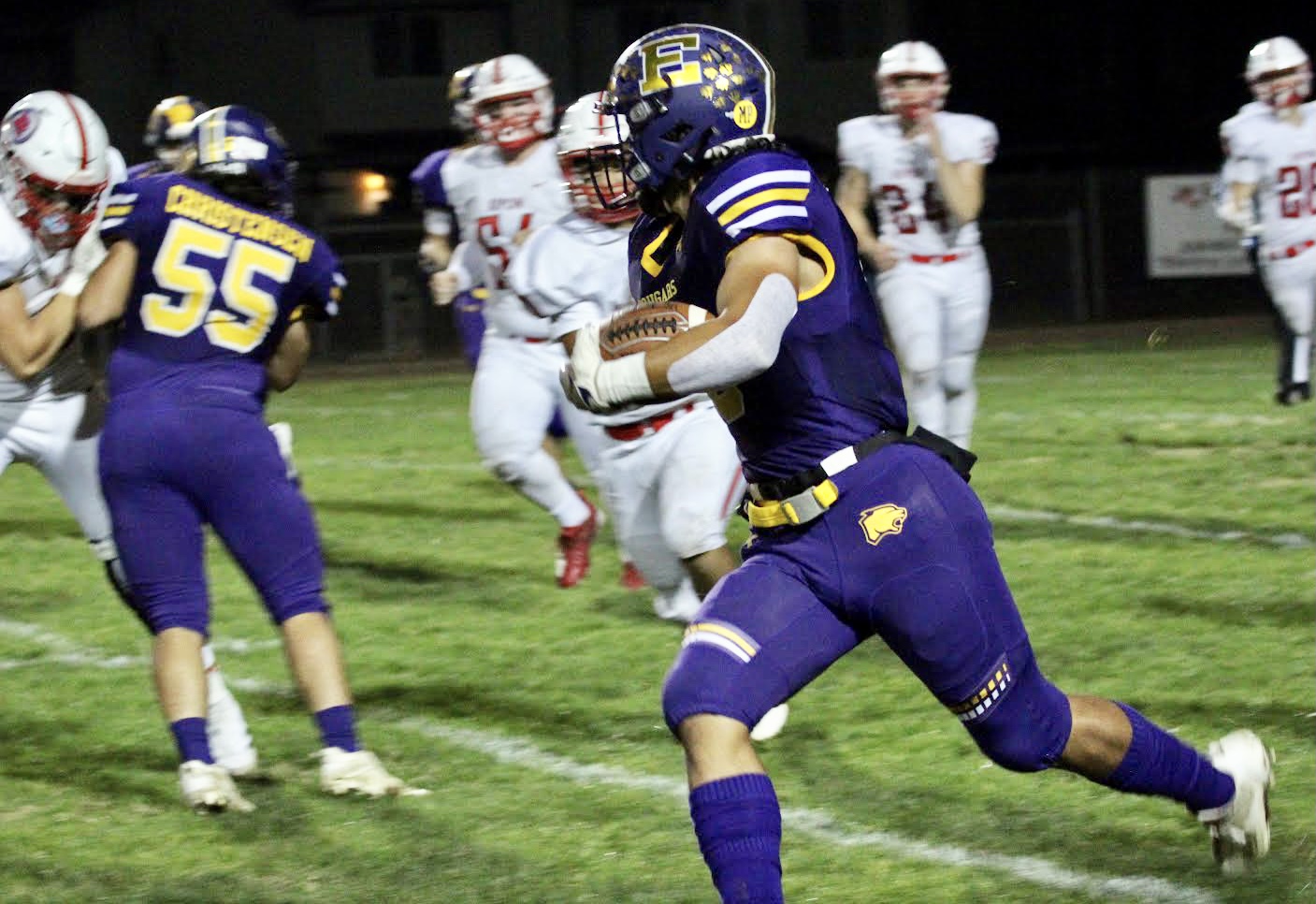 No. 1 Escalon clinches share of TVL title with rivalry victory over No. 2 Ripon

ESCALON – The Escalon High Cougars sped to the student section at game’s end, locked arms and swayed happily as they sang the alma mater, as though they had just done something big.

The Cougars celebrated a well-earned 21-7 victory over Ripon on Friday night because they knew what it meant – a sweet win over an archrival and Position A for Escalon’s first outright Trans-Valley League title in a decade if it beats Livingston next week.

“These guys haven’t played in big games,” said Escalon coach Andrew Beam in reference to his team’s five underclassmen starters and a group of seniors sidelined by COVID last fall. “Tonight was one of those teaching and learning moments.”

Escalon (8-1, 5-0) passed the test thanks to two football lightning strikes before the game was 6 minutes old. On the Cougars’ first snap, they ran a fly-sweep, which they selected a week ago to begin the game. It worked better than they could have hoped.

Matthew Baptista stepped to his left and, behind crunching blocks by Ryker Peters, Owen Nash and EJ Lewis, raced past his cheering teammates 90 yards for the game’s first touchdown.

“I liked that play because the blocking was great,” Baptista said.

Six plays later, Escalon again stunned Ripon on a defensive score that no doubt was a post-game conversation piece for a capacity crowd at Engel Field.

The shotgun snap to Ripon quarterback Adam Barrera banged off his facemask and was collected in mid-air by Escalon defensive lineman Tate Christensen. And off he went – running like a tailback – 67 yards to the end zone.

Don’t ask him about how he did it. It was all instinct and reaction.

“I don’t remember 95 percent of the run. I was amazed,” said Christensen, whose older brother Kaden was frontrowpreps.com’s Player of the Year in 2019. “He (a Ripon lineman) was on my left shoulder. I didn’t tell my legs to move. They did it for me.”

Escalon rode that 14-0 lead like American Pharoah the rest of the night.

“Those two plays got the crowd involved and settled our nerves a little bit,” Beam said. “Without that energy early, we don’t know what this thing would have looked like.”

Incredibly, Ripon and Escalon both won state titles two years ago on the same night on their respective home fields. Only three players, two from Ripon and one from Escalon, remain from those championship teams. That said, everyone understood the stakes in still another TVL showdown.

Ripon (6-3, 4-1), improved over the past month, still seeks a share of its sixth straight league title. Only now, the Indians will need help going into their regular-season finale next week against Hughson. Four turnovers – three interceptions and Christensen’s wild romp – doomed their chances at Escalon.

“They (Escalon) came out and executed well and we didn’t,” Ripon coach Chris Musseman said. “We’re just not built to come from behind.”

Ripon, showing its mettle, somehow eluded an early knockout. A goal line stand early in the second half energized the Indians, and a 67-yard strike from Barrera to Jack Manning further changed the momentum. Two plays later, Barrera swept 24 yards for the TD that closed the margin to 14-7.

Ripon’s stubborn defense forced a 3-and-out and the offense appeared to be in business near midfield. Escalon answered when Baptista, one of the Cougars’ two-way stars, intercepted a long pass and returned it 24 yards.

Soon after, Escalon restored its two-score lead on Logan Anderson’s 8-yard run. Anderson retreated to about the 17 before finding open space to his right.

Ripon responded with a determined drive to the Escalon 7, but it was turned away when sophomore Jamin Miller stepped in front of Bronson Burrow and intercepted at the 5.

“From Day 1, I didn’t think the TVL champion would be unbeaten,” Musseman said. “If Escalon can run through the TVL unbeaten this year, more power to them. This has been a gauntlet to run.”

There is still a little gauntlet left. But Escalon wasn’t singing by accident.