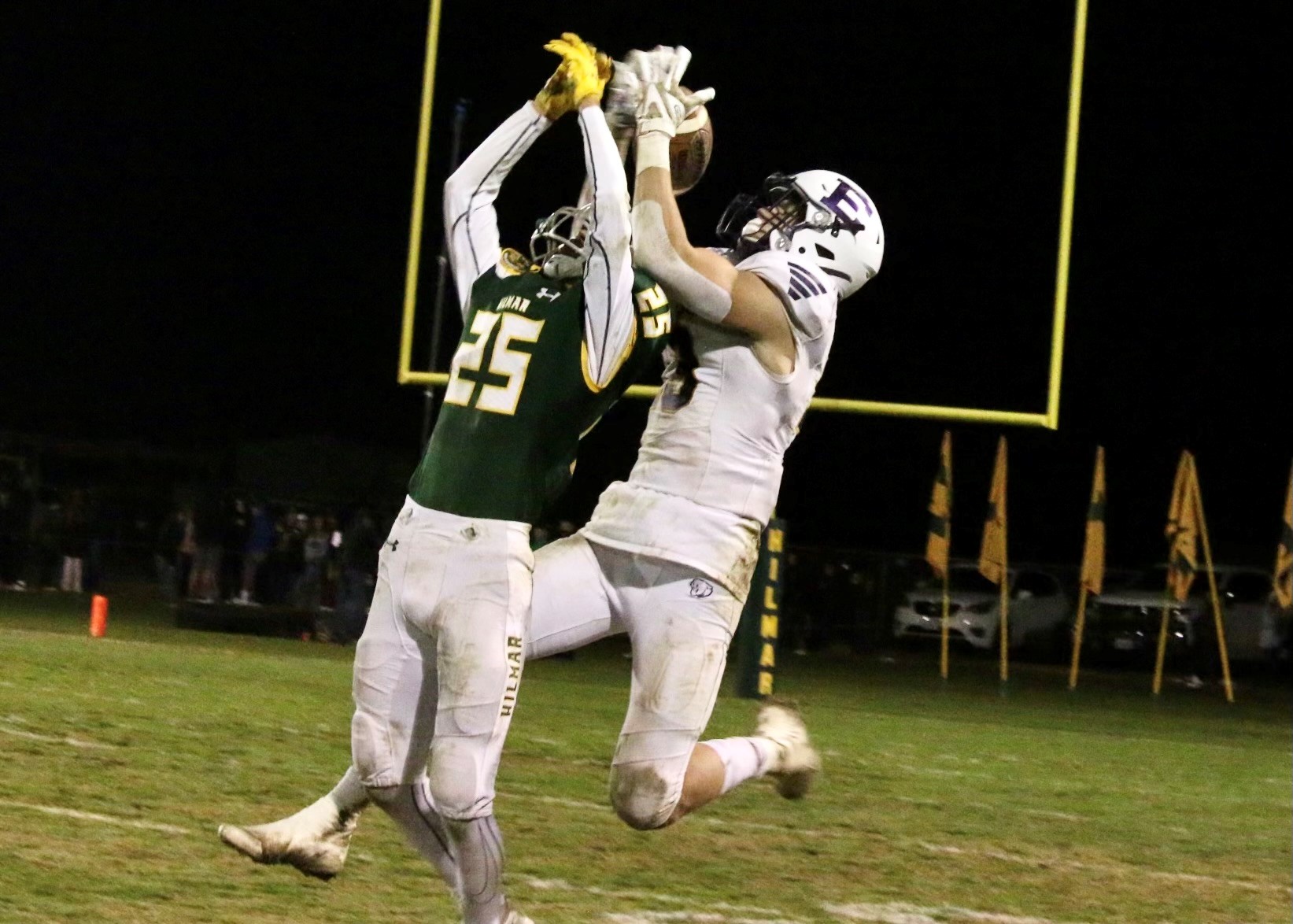 Escalon wide receiver Owen Nash pulls down a contested catch for the Cougars during a 42-28 victory over Hilmar on Friday, Nov. 11, 2022. Nash had two receptions, including a 54-yard touchdown in the fourth quarter to seal the win.

Escalon coach Andrew Beam believes the arc of the football season has followed the development of his team's passing game.

The fifth-seeded Cougar have won six straight games and secured a redemptive victory over No. 4 Hilmar in the second round of the Sac-Joaquin Section Division V playoffs thanks in large part to quarterback Donovan Rozevink's marksmanship. The second-year starter tossed three touchdowns behind enemy lines on Friday, including two in the fourth quarter to seal Escalon's 42-28 victory over the Trans-Valley League champions.

"Halfway through the season, from our last loss to Hilmar to now, he's done a complete 180. He's worked to become a more accurate quarterback and a better leader," Beam said. "We were pretty inaccurate early on. He was turnover prone early on. Since then, he's had one interception since the Hilmar loss and he's made big throws."

Escalon began the season as the region's top-ranked small-school football team and backed that praise with a string of impressive efforts against a string of larger playoff-caliber programs, including a shootout loss to Buchanan, one of the Central Section's top teams. Buchanan has a student enrollment of 2,726 and competes in Division I, while Escalon has an enrollment of 803.

Then Trans-Valley League play began and the Cougars hit a skid, suffering back-to-back losses to longtime rivals Hughson and Hilmar. The latter took the Cougars out of the running for a TVL title and shook up the balance of power in the Division V bracket.

At that point of the season, with his team limping along at 3-3, Beam admits that Escalon was in a "dark" place. He wasn't sure how his locker room would respond.

"This season has been very strange. Some major ups and some major downs. To play that preseason schedule and then roll into league and get embarassed in back-to-back weeks ... you got to credit Hughson and Hilmar. When we walked out of the locker room the Ripon week, this was a different team. We've gotten better every day.

"This team believed in themselves. We doubted ourselves after those losses. Those were some dark times, to be honest, but this team did a great job of staying focused."

Escalon turned its season around with a 43-0 drubbing of Ripon, which pushed top-seeded Sutter to the brink last week.

Since then, the Cougars have outscored their opponents 313-84, averaging 52.2 points per game. In his second season as the Cougars' trigger man, Rozevink has thrown for 1,508 yards and 18 touchdowns. In his last six games, though, he's been even better: 11 touchdowns against just one interception.

He's been effecient, and on Friday, he was explosive.

After Luis Vargas' 3-yard scoring run closed Escalon's lead to 28-21 early in the fourth quarter, Rozevink connected on a 56-yard strike to Logan Anderson. He followed that big play with another -- a 54-yard pass to Owen Nash -- as the lead ballooned to 42-21.

Anderson finished with 98 yards on five catches, while Nash had 85 yards on two receptions. Rozevink completed 10 of his 17 throws for 193 yards, 110 of which came on two passes in the fourth quarter. He also had a 10-yard touchdown to Matthew Baptista in the second quarter.

"We wouldn't be here today -- talking after a playoff win -- if we hadn't figured out the passing game," Beam said. "Him and our receiving corps have turned things around. Our team has a different vibe. We know we can run, and now we know we can throw it too."

On Friday, Rozevink's late heroics were set up by the run.

Ryker Peters rushed for 218 yards and three touchdowns, drawing the attention of the Hilmar defense. He scored on runs of 69, 21 and 47 yards, and the returning all-region running back averaged nearly 10 yards per carry. He has rushed for 1,616 yards, tops among small-school running backs and second only to Central Catholic's Tyler Jacklich.

"We pounded the ball early," Beam said. "To be able to throw the ball late and have those big plays, it was necessary."

Hilmar trailed from the start, falling behind 14-0, but the Yellowjackets showed their resolve. Caden Bailey's second rushing touchdown -- a 1-yard plunge -- trimmed the deficit to 21-14 heading into the fourth quarter. The dual-threat Bailey was 10 of 16 for 122 yards. He also had 127 yards on 15 totes, half of which came on a 65-yard scoring run in the first quarter.

"I'd say they're the best team in this bracket," Hilmar coach Frank Marques told the Turlock Journal. "It sucks that we had to play them so early in the second round, but we would've had to face them at some point."

Beam lamented the section's decision to place three TVL teams -- Escalon, Hilmar and eighth-seeded Ripon -- on the same side of the bracket. Beam said it showed a lack of respect for the TVL, historically one of the toughest small-school leagues in the state of the California, much less the section.

The Cougars will use it as fuel this week, as they look to clinch their 17th Sac-Joaquin Section finals appearance.

"We're looking for ward to (the road trip), because of the fact that I think it was disrespectful to our league to put three TVL schools on one side of the bracket. We're looking forward to playing Sutter, who's new, and putting on a good show."