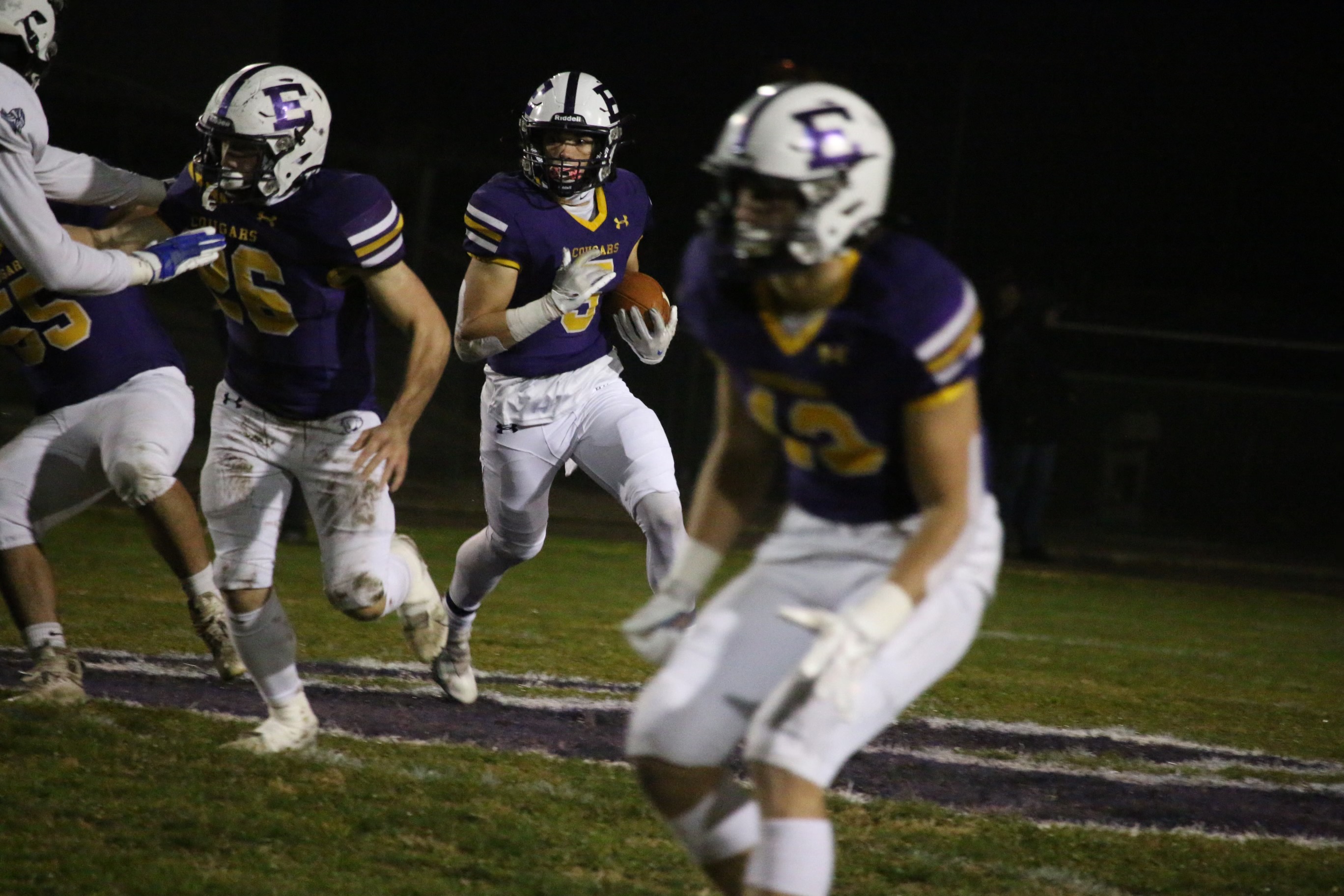 Escalon running back Logan Anderson follows his blockers down field during a victory over Pleasant Valley in the CIF State Northern California Division 4-AA Bowl on Friday, Dec. 2, 2022.

ESCALON – Confidence in football is expressed in many ways – the swift gait of a running back, a coach punching the sky with his fist, the ferocity of a goal-line stand, and the list lengthens.

The Escalon High Cougars, bound for another state championship game, manifested their confidence in capital letters Friday night – by going for a first down from their own 11 yard line.

It was 4th-and-2 to be exact on the final play of the first quarter, and the Cougars led by only 7-0. Ryker Peters took a pitch and worked hard for three yards, but the message behind the audacity was felt on both sidelines.

Accordingly, the Cougars dominated the line of scrimmage to defeat Pleasant Valley of Chico 42-20 in the CIF Northern California 4-AA final. The reward for Escalon (12-3) is one more game at Engel Field, against Northwood of Irvine Saturday night at 6 o’clock for the 4-AA crown.

Northwood (14-1) stopped Kennedy of  Delano 10-7 in the Southern California final. Escalon will seek its second state title in three years.

“I don’t know if it’s confident or lucky,” Escalon coach Andrew Beam said in reference to his gamble. “At 4th-and-2, we need to get that. They (Pleasant Valley) made a good play. It was close. We felt we needed to establish ourselves and sometimes we do risky things.”

Having Peters, Escalon’s relentless 210-pound senior fullback, on your side lessens the risk. Peters gave the game an Escalon rhythm by carrying  26 times for 204 yards and touchdown runs of 31 and 35 yards in the second half.

He also topped the 2,000-yard mark with a game left. Tackling him is no fun for any defense.

“We are definitely a second-half team,” Peters said.  “All I could think about…is if we win and play again at ol’ Engel, I’m happy.”

Peters, a two-way star along with several of his teammates, makes his mark with thunderous hits on defense and, of course, his performance with the ball.

“His season has been just like the team’s season,” Beam said. “He was injured early on. Getting him back healthy is big, but the whole team is getting better around him.”

Engel overflowed with fans, including a packed visitors section as Pleasant Valley saluted its team’s Cinderella season by making the three-hour trip. The temperature dipped into the high 30s, enough to turn exposed fingers purple and for one’s breath to be seen.

Escalon would have controlled the game in either the desert or an icehouse.  Pleasant Valley (9-5) won the toss, deferred and soon trailed 7-0.

The Cougars opened with seven straight runs, then scored when Donovan Rozevink tossed quickly to Owen Nash who shed a defender and finished the 16-yard pass-run.

The Vikings responded with their best drive of the night, a steady march that brought them to the Escalon 3. But the running back on 2nd-and-goal slipped and tapped the ball forward and the Cougars’ Tate Christensen recovered.

Tellingly, Pleasant Valley had not played on natural grass since its season opener. Engel’s notorious slow track once again paid off for the home team.

“That was a big turning point,” Pleasant Valley coach Mark Cooley said.  “They have a great scheme…Hats off to Escalon. I hope we can see them again someday.”

Escalon gradually pounded home its point. Late in the half, the Cougars sandwiched touchdowns between a poor PV punt and scored twice within 39 seconds. The first, a well-thrown 13-yard strike from Rozevink to Logan Anderson, was set up by an even better play on 4th-and-13. Nash, fending off two defenders, came down with the deflection and somehow stayed  inbounds for the 16-yard gain.

Talan Reider, who kicked all six extra points, also contributed with a 40-yard reception to the PV 3. Anderson, who finished the night with three TDs, scored seconds later for a 21-0 lead.

Pleasant Valley’s joy was temporary. Escalon’s ground game produced touchdowns on its first two possessions of the second half. Anderson loped in standing up on his 21-yard burst after a Jamin Miller fumble recovery, followed five minutes later by a Peters special.

He found room to his left, crashed through a defensive back at the 15 and completed his 31-yard romp to the end zone. The outcome was decided. Escalon outgained the Vikings 414-265.

“We just kept wearing on them. That’s what we try to do,” Beam said.

Escalon has won on-the-field state titles in 2010 and ‘19 and, before the playoffs were expanded, was declared a state champion by Cal-Hi Sports in 1993 and ’96. From another angle, the Cougars’ juniors sat in the bleachers in 2019 the last time Escalon raised a state plaque.

“The most exciting point (about next week) is playing at Engel Field in front of our fans. And they’re showing up,” Beam promised.

He knows. He’s confident. And so his team.