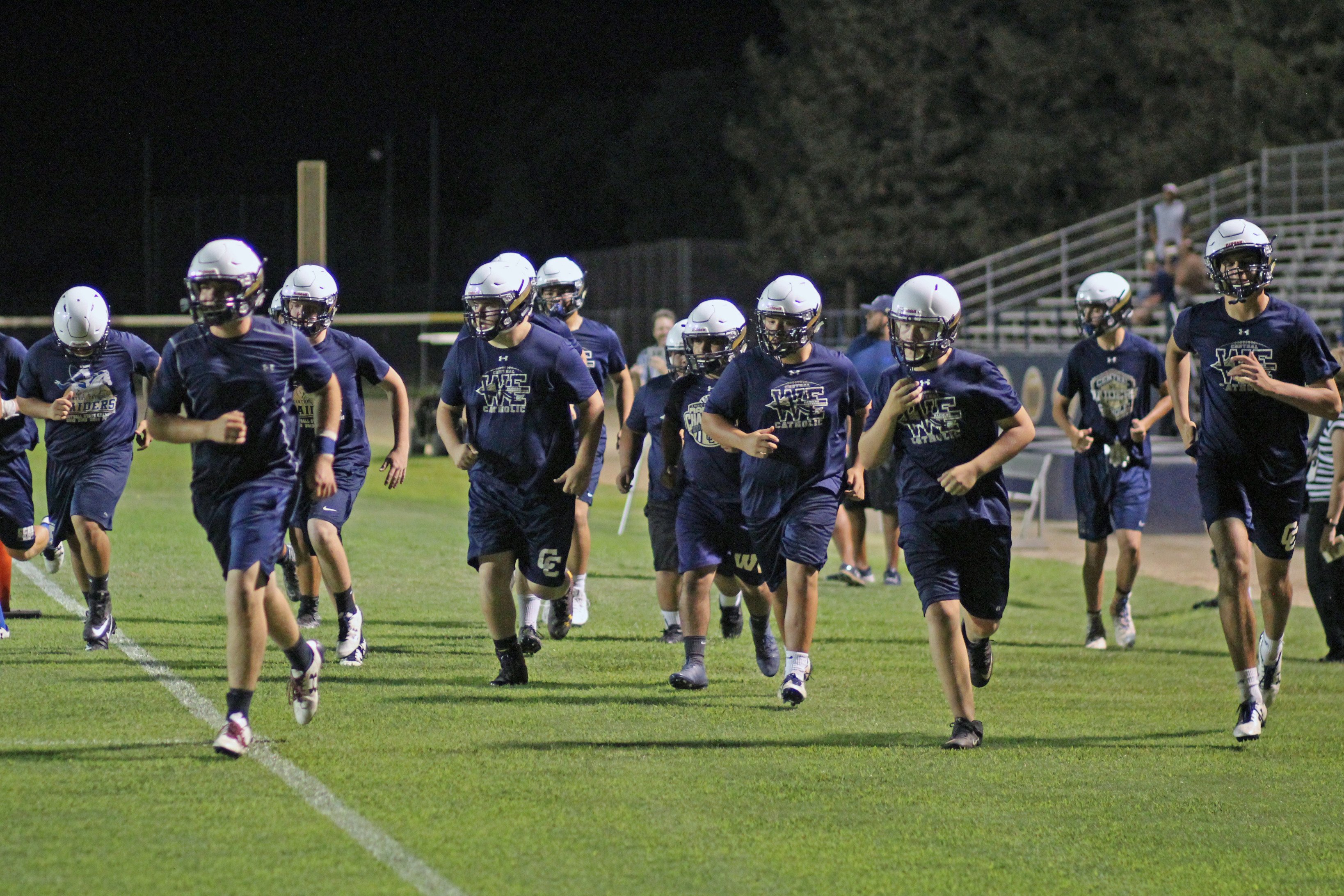 The Central Catholic football team takes the field for the first official practice after the Sac-Joaquin Section's dead period. The Raiders, along with Hilmar and Bret Harte, practiced at midnight. (Samantha Schmidt)

'Everybody clap!' Football returns with midnight practices across the region

As the clocked ticked down to double-0s, the anxiety and excitement in the huddle in the south end zone bubbled to the surface.

The mob of players bounced in unison. Central Catholic football coach Roger Canepa, a grizzly man with a short, stocky frame and high expectations, peered over his shoulder at the scoreboard.

At last, football was here.

Central Catholic, the Front Row’s top-ranked large-school program, was among the few area high school football programs to ring in the 2018 season with a midnight practice. Teams were allowed to practice with equipment on Monday, per Sac-Joaquin Section rules, beginning at 12 a.m.

By 12:01, the Raiders, a four-time CIF State champion, Hilmar, the reigning Sac-Joaquin Section Division VI champion, and Bret Harte, a Mother Lode League contender were in full swing, practicing with a purpose.

The midnight session was no novelty act, either. The coaching staff put the players through a full workout, realizing they can’t afford to waste a single moment on the field together.

The schedule bearing down on the Raiders is brutal, beginning with the season opener at Clovis West. Central Catholic then heads to national power De La Salle on Aug. 24, before making its home debut against Holy Bowl rival St. Mary’s.

The Raiders wrap up the non conference portion of their schedule with Lincoln of Stockton, the largest school in the section.

“If you’re going to be good, you have to have expectations,” Canepa said. “ You got to play the best to be the best. With the schedule we got, we’re going to find out if we’re good right away. No matter what happens, if we win or we lose, we’ll be battle-tested.”

With a deep cast of playmakers and people-pushers, the Raiders will reprise their role as Valley Oak League and section title contenders. Central Catholic competes at the Division II level, and then step confidently into that playoff with as much Division I talent as they’ve had in the Canepa era.

Running backs Dawaiian McNeely and D’angelo Bellamy have been courted by some of the biggest schools on the West Coast, and transfer Eric Soares (Modesto High) and three-year varsity starter Chris Mendoza anchor a formidable offensive line.

“This group has a lot of energy,” Canepa said. “We got a lot of good things ahead of us. Hopefully, we can compete well. I’ll tell you what, we’ll play hard and that’s the most important thing.”