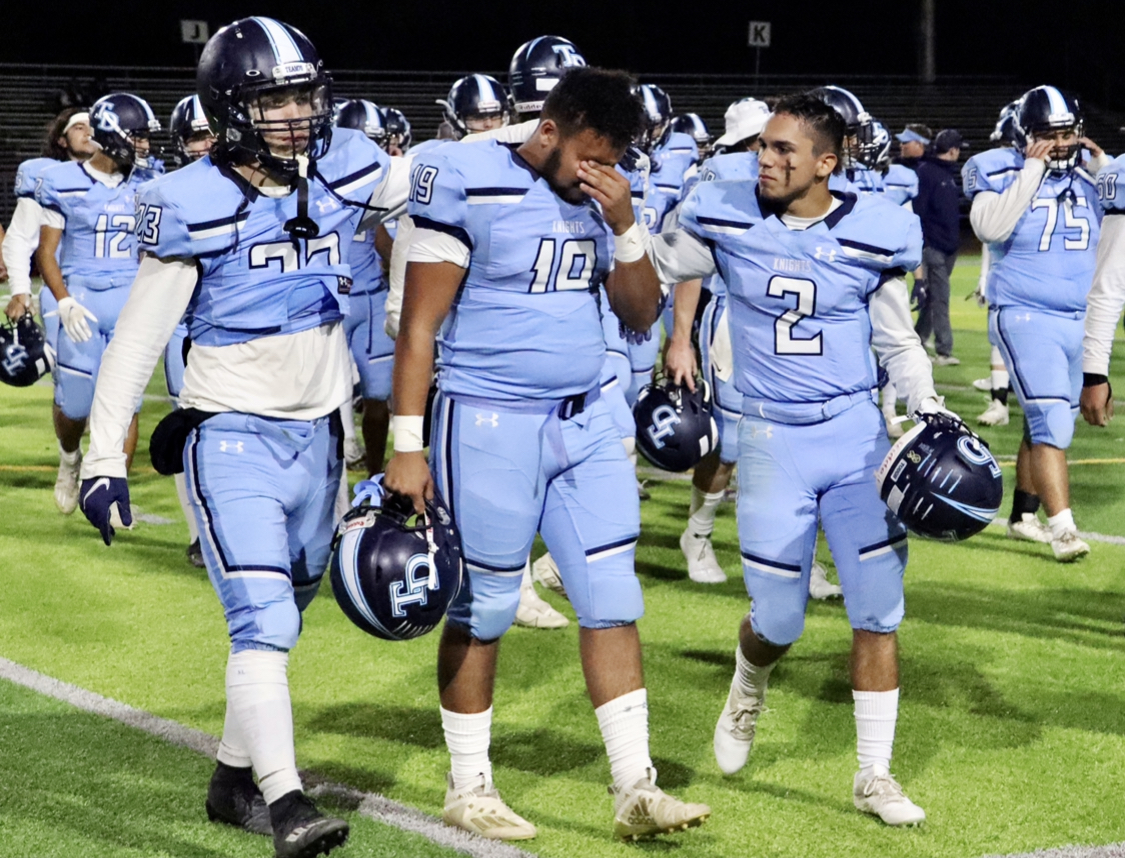 Downey High players leave the field after a season-ending loss to Lodi in the first round of the Sac-Joaquin Section Division II playoffs. (Samantha Schmidt)

Feelin' the heat: No. 8 Downey torched by No. 9 Flames in season-ending loss

MODESTO – Name one football team – any team – that won a game after not taking a snap on offense in the first quarter.

If it’s happened, it hasn’t happened often, and it certainly didn’t happen for the Downey High Knights on Friday night. Their offense took a seat for the first 12 minutes while Lodi built the momentum toward a rugged 38-19 victory in the first round of the Sac-Joaquin Section Division II playoffs.

The Flames (8-3), hardened by a tie for third place in the Tri-City Athletic League, controlled the game with their clever and punishing triple-option attack. The Downey defense lost a painful shell game to quarterback Adam Schallberger, whose ball-handling confounded the Knights.

“We all had our assignments,” said safety Fayzon Allen, one of 23 seniors to wear the Downey blue for the last time. “He (Schallberger) hid the ball very good.”

Lodi, after Downey deferred, rattled off the game’s first 19 snaps and settled for a short field goal. Then kicker Edison Ramirez recovered his own straight-ahead roller to further ice a Downey offense that averaged 41 points a game.

When the Knights finally made a stop, they fumbled it back to Lodi without a first down. Bradley Jenkins ripped 12 yards up the middle for Lodi’s first touchdown.

Lodi’s special teams weren’t finished. Ramirez then pooched one downfield that Jenkins collected at the Downey 23. Two plays later, Brayden Stout raced to the pylon to make it 17-0.

Downey (9-2), the Central California Athletic League champion and winner of nine straight, could not recover from such a slow-motion trainwreck. All told, Lodi converted five takeaways – three turnovers plus the kickoff trickery – into 28 points.

“Momentum is such a huge thing in football, and we couldn’t get it,” Downey coach Jeremy Plaa said. “We couldn’t quite get ahead of what they were doing on offense.”

Such dominance led to Lodi’s first playoff win in 11 years. The Flames had not even qualified for the playoffs in a decade.

“That was like a dream come true,” said an elated Lodi coach George Duenas in reference to his team’s roaring start. “It was the second quarter, and our team still had the ball.”

Downey closed to 17-7 early in the second half when Allen, despite tight coverage, tipped Conner Stoddard’s 40-yard pass to himself in the end zone. But Lodi responded with three straight scores, capped by Timmy Copeland’s 55-yard pick-six.

“When you play a triple-option team, they’re usually not good at all three,” Plaa said. “It was a puzzle we couldn’t put together tonight.”

Kimoni Ragland, a junior, rushed for two late Downey touchdowns and finished with 90 yards on 17 carries.

The reward for No. 9-seeded Lodi is a return trip to Modesto next week and a collision with top-seeded Central Catholic. The Flames may be without Powell, their slashing ball carrier, who was ejected late in the game after a brutal goal line hit on Stoddard. The Downey quarterback eventually walked back to the bench.

It was that kind of night for Downey --from the start.