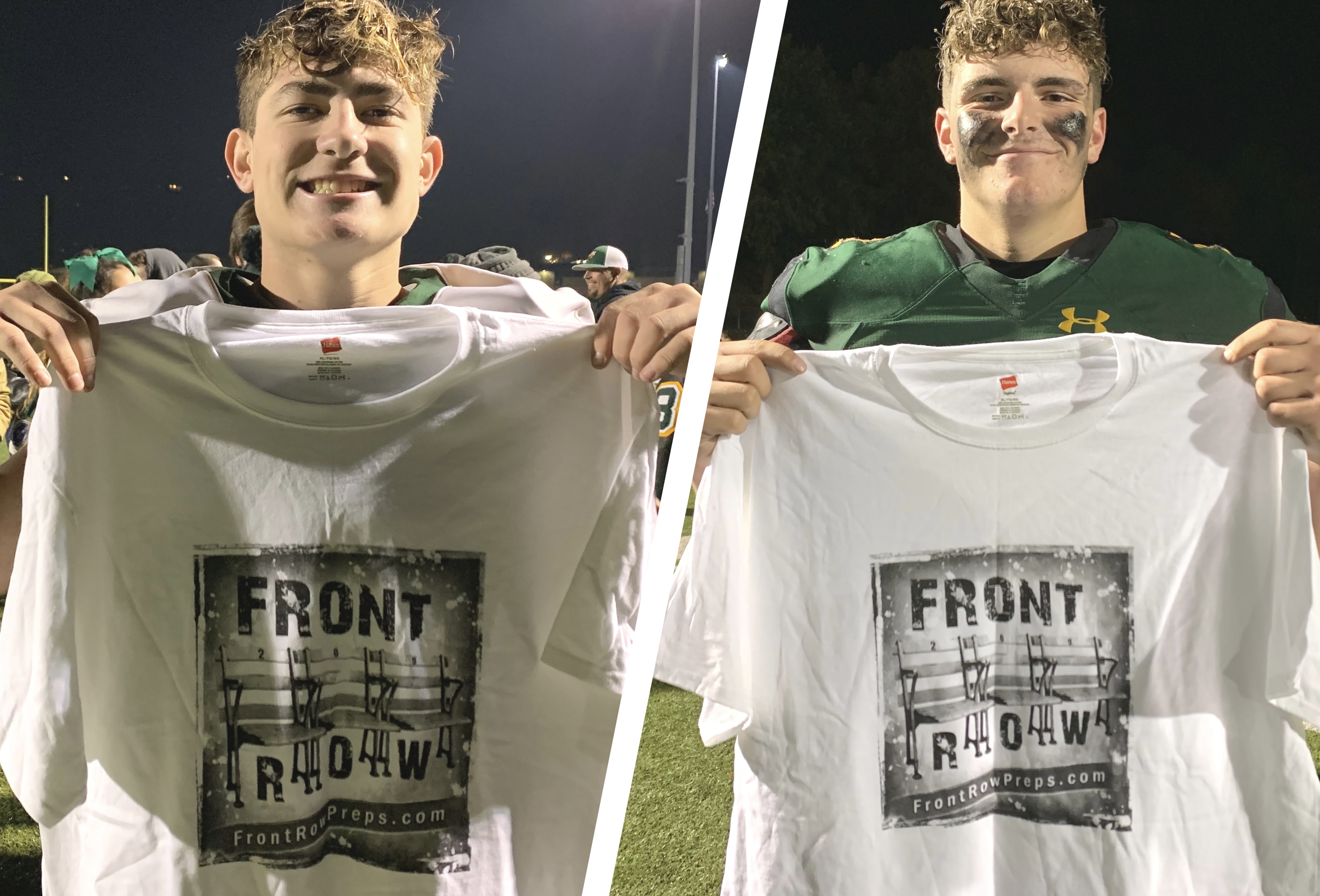 In a wild Sac-Joaquin Section Division V playoff game between Hilmar and Sonora, Broc John Perry (left) of Hilmar and Tyler Sells of Sonora were awarded FrontRowPreps.com player of the game shirts.

Fight of the Yellowjacket: Hilmar rallies to beat Sonora, advances to D-V semifinals

SONORA – The Hilmar High Yellowjackets were beaten and disappointed at halftime as they huddled at the southern end of Dunlavy Field.

Then the second half began. And everything changed.

“We made some adjustments,” coach Frank Marques allowed.

Hilmar adjusted, all right, from trailing 18-7 at the half to a slightly bizarre 35-31 victory Friday night to reach the Sac-Joaquin Section Division V semifinals.

It all resulted in smiles for the Yellowjackets (10-2), third-place finishers in the Trans-Valley League. They even snared a home game next week when No. 2 seed Union Mine was upset by Casa Roble 35-33.

Hilmar no doubt returned from the foothills and wondered, “How did this all happen?”

Hilmar, which averages 33 points per game, managed only a single first down and 27 yards during the first two quarters. On offense, Sonora road-graded the visitors up front with two top-tier guards – junior Tyler Sells and Division I recruit Roger Alderman – and center Chase Youngman.

The Wildcats (6-4), who enjoyed the bye last week after they clinched their seventh straight Mother Lode League title, were much improved from their 28-21 loss to Hilmar in early September. They proved it in the first half. Hilmar was fortunate to trail by only two scores.

Hilmar’s kicking game has been a program signature over the years.  Against Sonora, the punt team accounted for two touchdowns on two wildly different plays.

Blake Westmoreland, flying forward, used his facemask to block Tim Blackmore’s punt. The ball ricocheted to Broc John Perry who caught it in midair and raced 36 yards for Hilmar’s only points of the first half.

“I just tried to make myself big,” Westmoreland said.

Early in the fourth quarter, Hilmar’s Andre Alves – a weapon all night with his long punts and kickoffs – fielded a low snap and managed to roll one that appeared to be coming to a rest at the Sonora 5 yard line. Sonora sophomore Bryce Nicholson reached down and touched the ball, and Jax Branco alertly scooped it and stepped into the end zone.

The officials, after a conference, ruled it a fumble and a touchdown that increased the Hilmar lead to 35-25. Sonora quarterback Bradley Curnow dashed nine yards for his third touchdown on the game’s final play to close the margin.

The momentum switched when Pimentel, the Hilmar quarterback who also plays defense, recovered a fumble on the first snap of the second half. That triggered a 22-point third quarter for the Yellowjackets, who found life on Perry’s run-pass threat and all-business carries by Perry.

“We opened it up a little. Once we did that, it was unstoppable,” Pimentel said.

Sonora regained the lead 25-22 on an 80-yard march capped by Curnow’s second TD. The Yellowjackets answered with a 74-yard drive and took the lead to stay 29-25 when Perry raced to the pylon on third-and-goal from the 4.

Hilmar has won five straight games since inserting Pimentel at quarterback. It needed more than a few in-game adjustments, however, to turn back Sonora.

“I dreaded this game because I knew Sonora would be much better (in the rematch),” Marques said. “They run that veer and they just get going as the season goes on.”

The Wildcats will regret this one. Counting the punt-team woes, they turned it over five times, resulting in 21 Hilmar points, to the Yellowjackets’ zero turnovers. They also outgained Hilmar 373-219. A missed PAT and two failed two-pointers also hurt.

“Just too many mistakes,” Sonora coach Bryan Craig lamented. “You can’t make that many mistakes against a good team.”

“To overcome a two-score deficit against a team like this in the second half is a huge accomplishment for us,” Marques said.