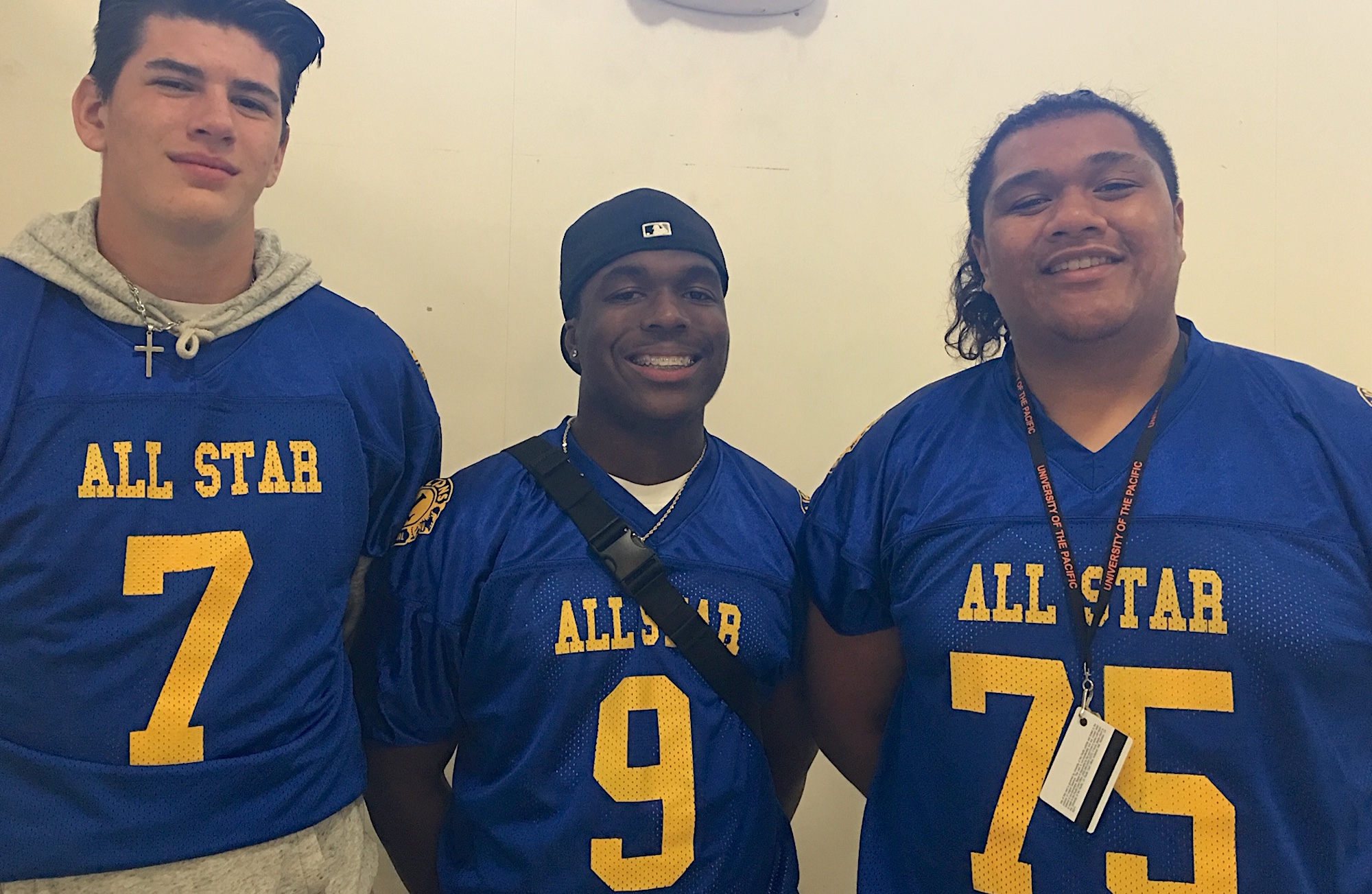 “It’s a great honor to finish where it all started,” said West, the Tri-City Athletic League’s Defense Player of the Year. “To have one more game there is special.”

The Lions All-Star Football Game returns to Stockton, its original home. It was contested at the University of the Pacific’s Stagg Memorial Stadium – demolished in 2014 – from the 1974 inaugural through 2011, followed by a two-year stop at Modesto Junior College.

From there, Tracy High’s Wayne Schneider Stadium welcomed the all-stars until this year, when Lions officials felt the game needed new energy.  The answer was Lincoln’s Alex G. Spanos Stadium, the scene of many thrilling Sac-Joaquin Section title games and Northern California regional competition over the years.

The renovated venue seems like an ideal fit for the all-star game, one of California’s oldest. It’s come full circle, and no one’s more happy about that than the three Lincoln grads.

Not only are they familiar with the turf, they also have one more chance to set aside a less-than-satisfying 3-7 season in 2018. They’re also aware the North is 0-5-1 vs. the South in the last six meetings.

“Our rival St. Mary’s has been beating us for a while (15 straight years), so we’re used to being the underdogs coming into games,” said West, who logged more than 13 tackles per game last fall and will soon take his ballhawking style to Valley City State (NAIA) in North Dakota. “We’re going to have a chip on our shoulder, definitely.”

The North team, which is staying this week at UOP and working out at Stagg, loaded into vans and traveled to the Linden Lions Club headquarters for the team dinner Tuesday night. Club members dined with the all-stars while looking forward to the rest of the week.

“It sounds like it (bringing the game back to Stockton) was the right thing to do,” said Mountain House’s Jason McCloskey, the North head coach.  “The theme of homecoming is appropriate.”

True that, and especially so for the Lincoln products. Sitigata, a 6-foot-3 315-pound all-TCAL selection, will enjoy his prep finale before he resumes at San Joaquin Delta.

“I feel like I’ll have an advantage,” he said. “Glad to bring it back home.”

Stevenson, whose passing skills and 6-5 220-pound frame drew interest from schools such as UCLA, Colorado and Michigan, followed an old recruiting adage: Go where you’re most wanted.

With that, Stevenson – the son of a Marine – accepted a scholarship from Tyler (Texas) Junior College. Stevenson passed for 1,677 yards, 12 touchdowns and 10 interceptions in eight games last season for Lincoln. He’ll leave for Texas next month.

“I’m excited for this,” he said. “To have the last game of your career as an all-star on your home field, that’s a pretty cool thing. I’m also hoping for good results in Texas.”

Notes: Kickoff on Saturday night will be at 7 o’clock, preceded by player introductions at 6:40. Tickets cost $10 at the gate, and parking adjacent to the stadium is $5. … Former players in the game are invited to an alumni tent sponsored by Chase Chevrolet. … U-JAM, a Stockton community dance group, will perform before the game. Also featured on game night is a band from Chavez.