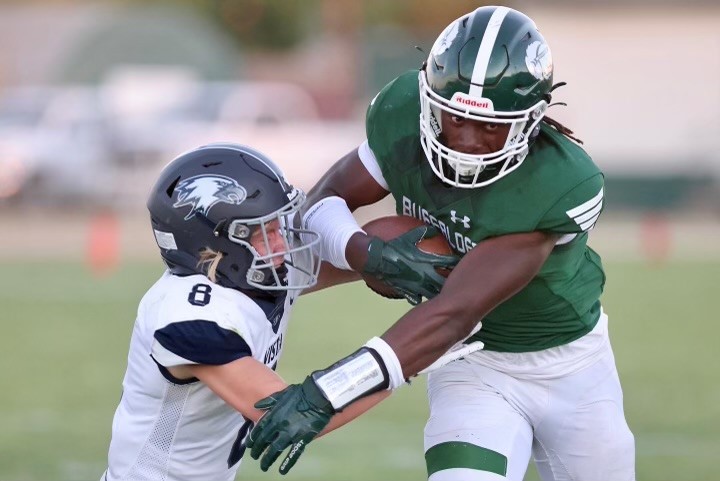 On the first play of the season, Manteca High junior Bryson Davis returned the kickoff 84 yards for a touchdown, starting the Buffaloes off with a 7-0 lead.

The reigning Sac-Joaquin Section Division III champions never looked back, outpacing visiting Vista del Lago of Folsom (0-1), 44-6. Manteca (1-0) led 44-0 at the half, thanks in large part to Davis.

“I was a little nervous at first,” Davis said, soft-spoken and a bit shy outside of helmet, “but once they kicked that ball off, I was locked in.”

Plays like this just come naturally to Manteca High’s newest running back.

This season is Davis’ first in high school football, as a junior, but don’t let the fact that this is Bryson’s first year fool you. Before his Friday debut, Davis played eight years of Pop Warner football. In his first game, he made it clear that he is a threat on the field and has speed to burn when he has the ball in his hands.

Following the fast start, the Buffaloes did not stop there, finishing off the first quarter with a 15-0 cushion.

The Buffaloes defense continued to shut down the Vista del Lago Eagles until giving up a fourth quarter touchdown with 8:34 left on the clock.

The Buffaloes created turnover after turnover and put a tremendous amount of pressure on the Eagles’ offense. Even the highly recruited wide receiver from the Eagles, Matt Long, was blanketed by Nichelson all evening.

“D-Time is a brand,” Varnum said. “We have dangerous, dangerous, athletes, and if we play defense like that, we are going to be tough to beat.”

Offensively, Manteca features a “three-headed monster,” as Varnum calls them, consisting of Davis, Nichelson, and Kaden (KP) MacDannald (two fumble recoveries). Nichelson and MacDannald are versatile talents; each can split out wide and stretch the defense with quarterback Hudson Wyatt.

With so much stardom, Varnum is excited for what this season has to bring and highlights other players to be on the lookout for. The highlighted players being Alijah Cota who was called, “a beast with the ball,” by Varnum, along with, Thomas Perea, James Dennis, and Chris Chavez.

As a senior, Cota is the captain of the Buffaloes. His exciting potential was shown when he scored with 16 seconds left in the first half.

Lauren Davis is a junior at Sierra High School. She is a first year intern forFrontRowPreps.com. Davis loves watching and reporting on sports, with baseball being her main love. She hopes to pursue a career in journalism.