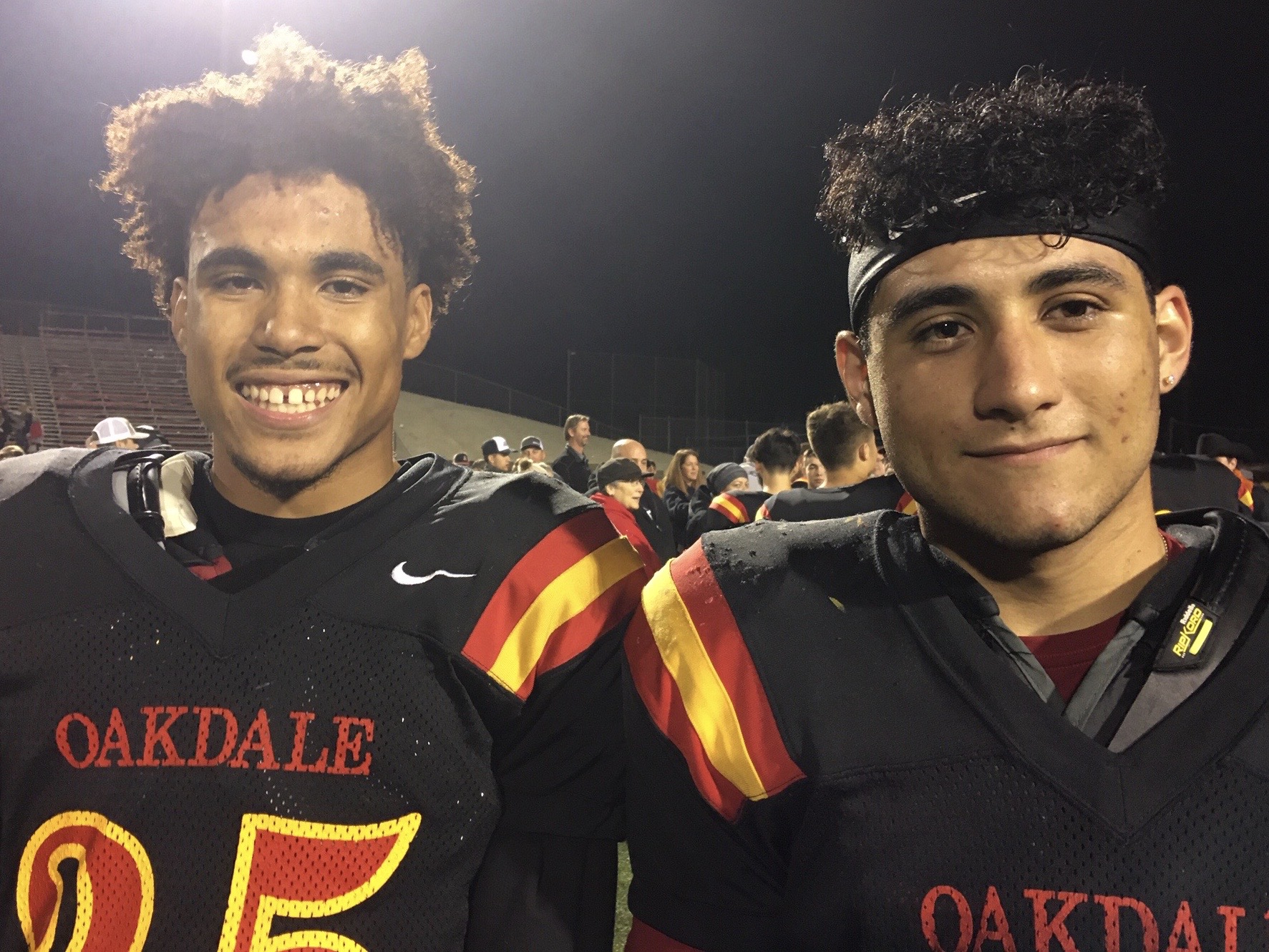 Oakdale running backs Zeke Saffar (left) and Leo Ayala combined for 362 yards and four touchdowns during an easy win over Patterson in the second round of the Sac-Joaquin Section Division IV playoffs on Friday, Nov. 15, 2019, in Oakdale.

OAKDALE – Oakdale High junior Zeke Saffar felt the weight of Oakdale on his shoulders as the season began.

A promising sophomore year ramped up the expectations – always through-the-roof expectations in this city – and Saffar started slowly.

Memo to the semifinalists in Sac-Joaquin Section DIV – Saffar is gaining speed.

The Mustangs’ prime-time weapon crunched Patterson for 207 yards and two touchdowns on 22 carries, the main entree in Oakdale’s 67-21 walkover Friday night at The Corral.

The win earned No. 2 seeded Oakdale (8-3) another home game next week against sixth-seeded Merced, which rallied from behind to eliminate Casa Roble 38-26.

Saffar merges breakaway speed with a reluctance to be stopped, which makes him almost ideal in Oakdale’s fast-tempo Wing-T. All he needed was a mental gear-shift.

“I had a whole city behind me and I felt like I had to carry the team,” Saffar said. “Coach (Trent Merzon) does a good job telling me I just have to do my job. That lowered the stress. Now I’m as confident as I could ever be.”

Saffar’s touchdowns, runs of 29 and 14 yards, spiced Oakdale’s 29-point third quarter that ushered in a running clock for the final 12 minutes. His impact was felt long before, however, while the Mustangs cruised to a 31-7 halftime lead.

Oakdale introduced itself to Patterson (7-5) with a 96-yard 13-play testimonial to how it’s done in this venue—downhill running, a couple of passes to keep the defense honest and a big finish. Sophomore quarterback Jackson Holt, shaking off a flu bug, found Cole Snider alone in the Patterson secondary for a 30-yard touchdown strike.

Veteran Patterson coach Rob Cozart was painfully familiar with this act. The Tigers have ended two of their last three seasons with playoff losses at Oakdale. Two years ago, Patterson walked in with an 11-1 record…and was thumped 63-27.

The Tigers also showed off junior Adrian Melesio, one of Northern California’s top kickers, who drew attention with his three field goals last week. Noteworthy: He doesn't use a tee on placements.

Oakdale answered with jack-of-all trades Dom McDonald, a game-long contributor with eight extra points, a field goal, a conversion pass and – on defense -- a 32-yard pick-six.

“He’s a corner, an athlete and, by the way, he’s also a kicker,” Merzon qualified.

Oakdale, idle since its thrilling victory over Central Catholic two weeks ago, didn’t regain its stride until a sharp practice on Wednesday.  Even better was watching Saffar in peak form.

“The important thing about Zeke getting going is Leo going, the wings going and Jackson (Holt) going,” Merzon said.