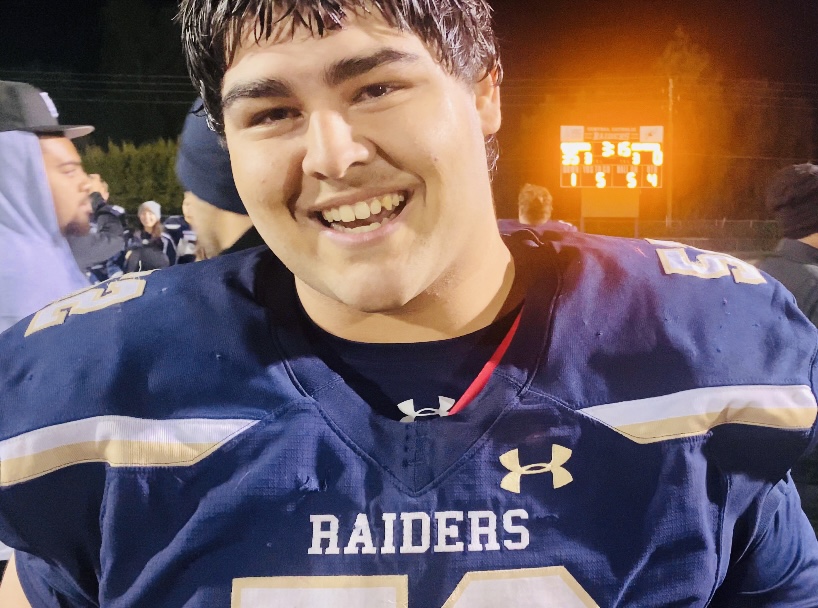 Jericho Machado helped set the tone in a 35-0 victory over No. 4 Antelope on Friday, Nov. 19, 2021, with a first-half sack. The defense notched its third shutout of the season.

Jericho Machado surged through the line of scrimmage, his second trip into the Antelope backfield on consecutive plays.

This time, the Central Catholic lineman wrapped up his prize — Antelope quarterback Jasiah Bateman — for a sack. Machado howled through his facemask and clenched his fists as the breath escaped him. The defensive stop early in the first half typified Friday’s Sac-Joaquin Section Division II semifinal at David Patton Field.

Challenged a week ago by a deceptive offense and dense fog, Central Catholic responded with its third shutout of the season.

"We practiced hard all week," said Machado, a boxy 290-pound, four-year varsity player. "Coming out, coach telling us again and again, 'We got to come harder and faster than the other team.' It felt good to be able to have all of that practice pay off in that first quarter."

One week after being pushed to the brink by ninth-seeded Lodi, No. 1 Central Catholic (11-1) throttled No. 4 Antelope (10-1), handing the Titans their first loss, 35-0. The win vaults the Raiders into their first section championship game since 2018. They’ll play No. 7 Monterey Trail, which continued its Cinderella run with a 27-23 win over its cross-city rival Elk Grove.

“I'm excited," Central Catholic coach Roger Canepa said. "It's hard. We got 360 kids and now we're playing Monterey Trail. We beat Antelope and we played Lodi. Our strength of schedule has put in a spot where we're used to playing really good teams. I think that's helped us. We needed it tonight. That's a very good football team."

The Raiders advanced with a defensive masterpiece. One week after being gashed by Lodi’s triple option offense for 34 points, Central Catholic’s defense stood tall, led by Machado in the trenches and safety Nolan Croasdale patrolling the spaces down field. The Raiders induced three turnovers, including a red-zone fumble on Antelope's opening drive, and knocked the Titans' cagey starting quarterback, Bateman, out of the game.

Bateman had to be helped off the field early in the second half with an apparent shoulder injury, and with him went Antelope’s hopes of a perfect season. Instead, Central Catholic returns to a game so familiar to its fans. The most decorated program in section history, regardless of division, Central Catholic will appear in its 23rd section final looking for a record 20th blue banner and first in Division II. It's also the Raiders' sixth section final in the last nine years.

Canepa praised his defense, which recorded its second shutout in three games and third overall, for paving the way.

"It shows how mentally tough we are," he said. "We work hard. I think a lot of people think we have all the best players in the world or whatever. We get where we're at because we work hard."

Machado played on the 2018 team that reached this D-II final at Sacramento State and lost a heart-breaker to Del Oro, which later had the title vacated for using an ineligible player. Central punched its ticket back by grounding an offense with a 2,000-yard running back (Curron Borders) and one that had scored 35 or more points eight times.

"It feels great," Machado said. "Coming off the COVID season and everything that was all trash, it feels great to be having regular football.

"It was just a lot of, like, hammering into our heads: 'Be able to play hard. Come back from another week like that, a close game.' You know, we don't like to have those games. It was a hard week of practice and a lot of motivation. ... This is what our team does. We practice hard for this reason exactly. This is what we do."

Aiden Taylor led the offensive assault, just as he has all season. The Raiders star running back rushed for 124 yards and three touchdowns, including a pair of goal-line scores on fourth down to give the Raiders an early 14-0 cushion.

His running mate, Julian Lopez, rushed for 88 of his 100 yards in the first half, including bursts of 28, 21 and 19 yards to propel scoring drives.

Quarterback Tyler Paul Wentworth tossed two fourth-quarter touchdowns to set the rout in motion. The smooth 6-foot-5 left-hander found Croasdale all alone in the corner of the end zone to make it 28-0. Moments later, Wentworth feathered a 22-yard scoring strike to Romeo Eteaki to make it 35-0, unraveling the Titans whose composure was tested in the final minutes.

Croasdale has shown no ill-effects from a knee injury that forced him to miss nearly three Valley Oak League games. He recorded the first of two interceptions by the Raiders, and then found space in the right corner of the end zone for his team-leading third touchdown reception.

Wentworth sold the play with a play-action fake at the line of scrimmage and then fooled the defense once more by appearing to tuck the ball for a keeper. When the defense bit — and then bit harder — he flipped the ball to his left hand and found Croasdale all alone for six.

"People don't get it. We can throw the ball," Canepa said. "We're a very good offensive team. We play power football and we can throw it. We've got a great quarterback who reads (the defense) and has great play-action. When he gets to the corner, he can run. ... When we need to throw, we throw."

Croasdale's most impressive catch? A diving grab down the sideline to complete a 36-yard pitch from Wentworth in the second quarter. On the play, Croasdale beat his defender with a twitch at the line of scrimmage and then sped past him down the line, extending for the over-the-shoulder catch at the 10.