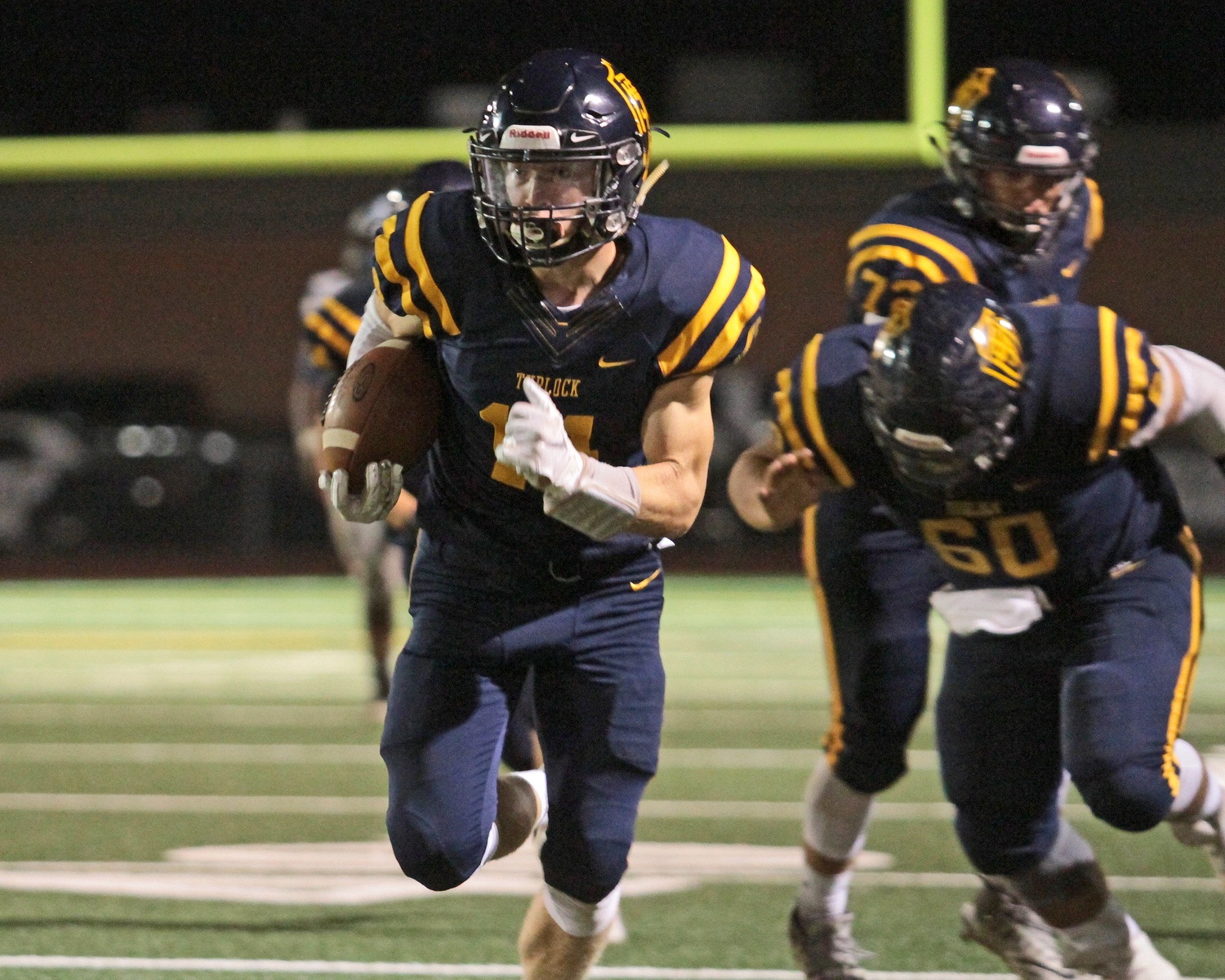 Turlock High's Lucas Curtis rumbles for yardage during a 30-24 victory over Downey (Modesto, Calif.) in the Central California Athletic League opener for both schools on Friday, Sept. 28, 2018, at Turlock's Joe Debely Stadium.

Turlock High turned the ball over four times in the red zone -- three on fumbles, one on downs -- Friday night in the renewal of their decades-old rivalry with Downey at Joe Debely Field. It stands to reason, then, that they'd win the game with a red zone takeaway of their own.

With the Knights inside the 20 and about 30 seconds left to play, Garret Fountain picked off a pass at the 3-yard line to preserve the Bulldogs' first-ever Central California Athletic League victory.

And on homecoming, no less.

"Coach called Leopard and that was our call for me to go back to safety, so we've got three kind of taller dudes back in the backfield," said Fountain, a 6-foot-4, 215-pound specimen who has commited to play at San DIego State. "I was the left side because it was a wider field and Lance (Couchman) was helping Darian (White) on the other side. So, the quarterback rolled out to my side ... and he overthrew the receiver he was going for and I just came up and caught the ball ... that was about as special a moment in my life, it felt like."

The win evens the series, which started in 1953, at 26-26-3. The teams had not beein in the same league since 2003, when both were members of the Central California Conference. Since that time, Downey played in the now-defunct Modesto Metro Conference, and the annual rivalry fizzled.

But new life was breathed into it Friday.

With the game knotted 14-14 at the half, the Knights recaptured the lead on Cris Cortez's 26-yard field goal with 9:07 to play in the third quarter.

Turlock forged ahead on a 1-yard run by quarterback Jonah "The Polish Eagle" Kosakiewicz scored on a 1-yard run less than a minute later, making it 21-17, and seemingly took control of when junior lineback Jayden Jackson stepped up to meet his coach's challenge

"It starts all the way back from the beginning of the year," said Jackson, who returned an interception for a 17-yard touhdown that made it 27-17 with 8:03 to play in the third quarter. "Coach Peterson, he's been challenging us, he's been wanting that pick-six."

Turlock extended te lead to 30-17 on Christian Gardner's 38-yard field goal but Downey answered a minute later when quarterback Bryce Gouker, starting in place of injured freshman Beau Green, scrambled in the backfield and found an uncovered Jordan Wilson in the corner of the end zone, pulling the Knights to within a touchdown -- 30-24 -- with 6:42 remaining.

Downey's final drive of the game started with just over two minutes to play and the Knights were in the red zone with just about 30 seconds to play. Gouker rolled to his right and thought he had a receiver open near the goal line, but Fountain stepped up and ended the game.

"We had to earn that thing, every snap tonight," said Turlock coach James Peterson, whose team was flagged for 18 penalties in additon to fumbling the ball six times, four of which were lost. "We battled through a lot of adversity. Putting the ball on the ground, penalties, two things that will help you lose a football game, and our guys battled."r

Turlock looked impressive on the game's opening drive, marching all the way to the 1-yard line before fumbling on a botched handoff. The ball bounced around before being schooped up by Lawrence Harris, who rumbled 87-yards for the game's first score with 8:38 to play in the first quarter.

Turlock tied it 7-7 three minutes later when Lucas Curtis scored from 17 yards out on fourth-and-1. After forcing the Knights to punt, the Bulldogs were read to take the lead but a fumble in the end zone kept the game deadlocked. Downey took advantage, and pulled ahead 14-7 when Robert Rivera hauled in a short screen pass from Gouker and raced 50 yards up the visitors' sideline. Turlock advanced to the 2 on its next possession, but turned the ball over on downs. It got another chance a few minutes later, marching to the 15, but again fumbled away a scoring opportunity.

Just before the half, Turlock found red-zone success again when Rios Rogers shot in from 11-yards to make 14-14 with 32.8 seconds showing on the clock.
"That's always the thing Pete says, 'The team with the most turnovers usually loses the game,' " said Kosakiwicz, referring to Coach Peterson. "Luckily, today, we came out and battled ... our defense made huge plays when we need them to."