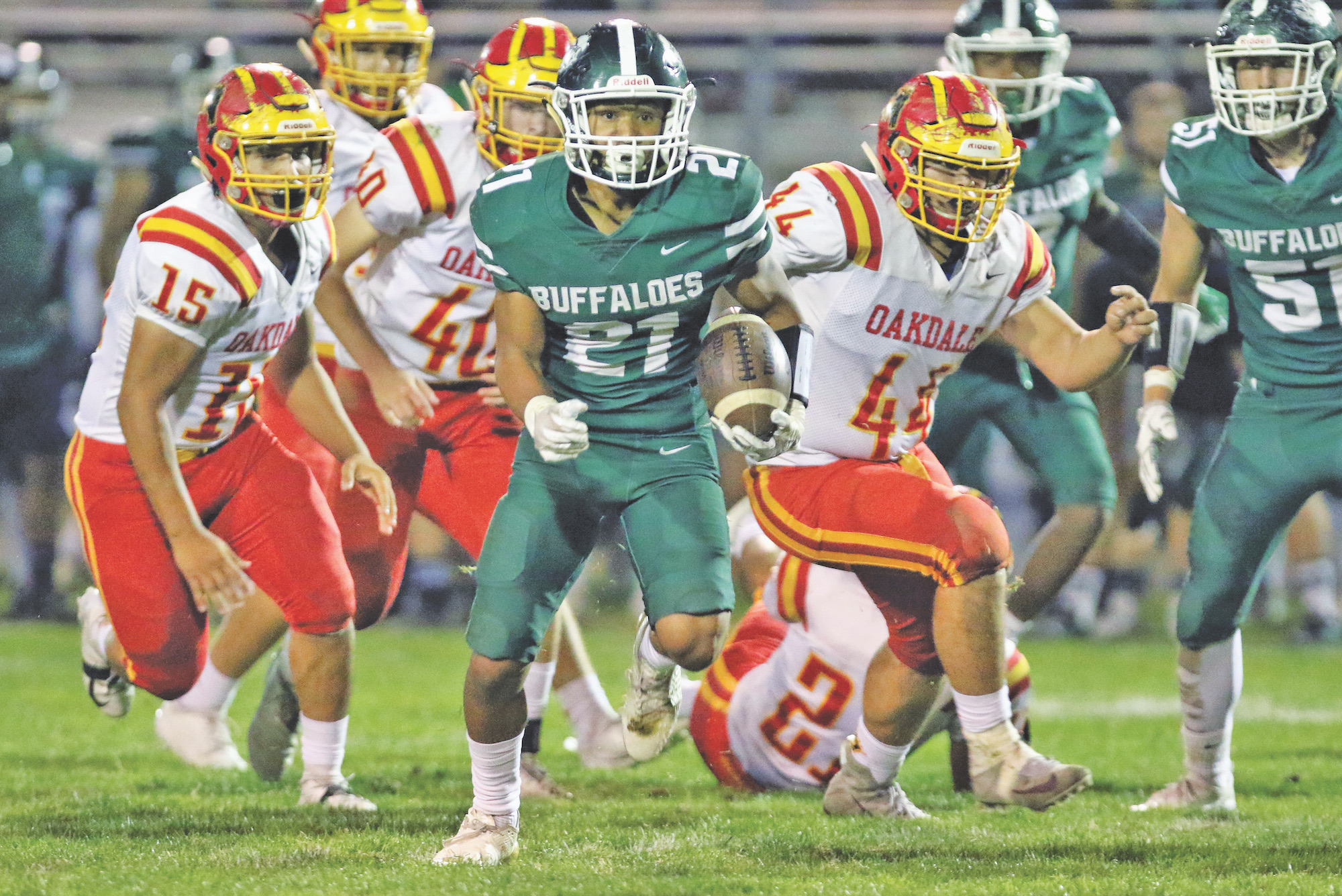 With the advent of the CIF State Bowl playoff system — section champions advance to regional bowls, and the winners of regional bowls play in state bowls — early starts and long seasons have become the new norm in high school football.

So here we are: On Friday, some teams will play their eighth game before the first leaf has changed colors and landed on your lawn.

While the early start and unusual calendar has been jarring, the matchups have saved us. One week after there was no movement in the FrontRowPreps.com large-school rankings, teams traded places following three games between top-10 teams, including two in the impressive Central California Athletic League.

Here’s a closer look at this week’s large-school poll and another week with three top-10 battles:

1. (1) Central Catholic (6-1, 3-0): Dalton Durossette completed nine of his 14 passes for 161 yards and four touchdowns and D’Angelo Bellamy had 109 yards from scrimmage and three scores in the Raiders’ fifth consecutive win. Next: vs. Weston Ranch.

2. (2) Merced (6-0, 2-0): Since a shootout victory over Downey, the Bears have outscored their last three opponents 170-41, showcasing a stingy defense to go with that high-powered offensive attack. Coming off a bye, Merced will face its toughest challenge in CCC play Friday. Next: vs. Buhach Colony.

3. (3) Pitman (6-0, 1-0): The Pride improved to 6-0 for the third time in program history with a 38-6 win over Enochs in their CCAL opener. The latest hero was wide receiver Denzel Steckwren, who had 137 yards and two touchdowns on three catches. Next: vs. Gregori.

4. (5) Turlock (3-3, 1-0): The Bulldogs overcame three fumbles in the red zone and San Diego State-bound senior linebacker Garrett Fountain sealed a 30-24 victory over Downey with a late interception. Next: vs. Modesto (Chuck Hughes Stadium).

5. (7) Buhach Colony (5-1, 3-0): Buhach Colony is averaging 52 points per game over its last four — all blowout wins — and can seize the inside track to its first CCC championship in six years with a win on Friday. Next: at Merced.

6. (4) Downey (3-3, 0-1): The Knights have lost two straight and face an uphill battle in the CCAL. Hope is not lost, though. Downey can get back on track Friday against Enochs, before closing with Gregori, Pitman and Modesto. Next: vs. Enochs, Thursday.

7. (9) Manteca (3-3, 1-1): The Buffaloes played with their "Big Four" — quarterback Ryan Ward, wide receivers Jorge Cedano and Jacob DeJesus, and running back Trabron Russell — for the first time in weeks in a 19-14 victory over Oakdale. Next: at Kimball.

9. (6) Oakdale (5-2, 2-1): The Mustangs let a halftime lead slip away in their second straight loss to Manteca. The loss snapped Oakdale’s four-game winning streak and puts their two-year reign atop the VOL in jeopardy. Next: at Sierra.

10. (8) Modesto (4-2, 0-1): One week after bottling up Stagg’s prolific offense, the thin-rostered Panthers tired down the stretch in an ugly loss to Gregori in their CCAL opener. Next: vs. Turlock (Chuck Hughes Stadium).