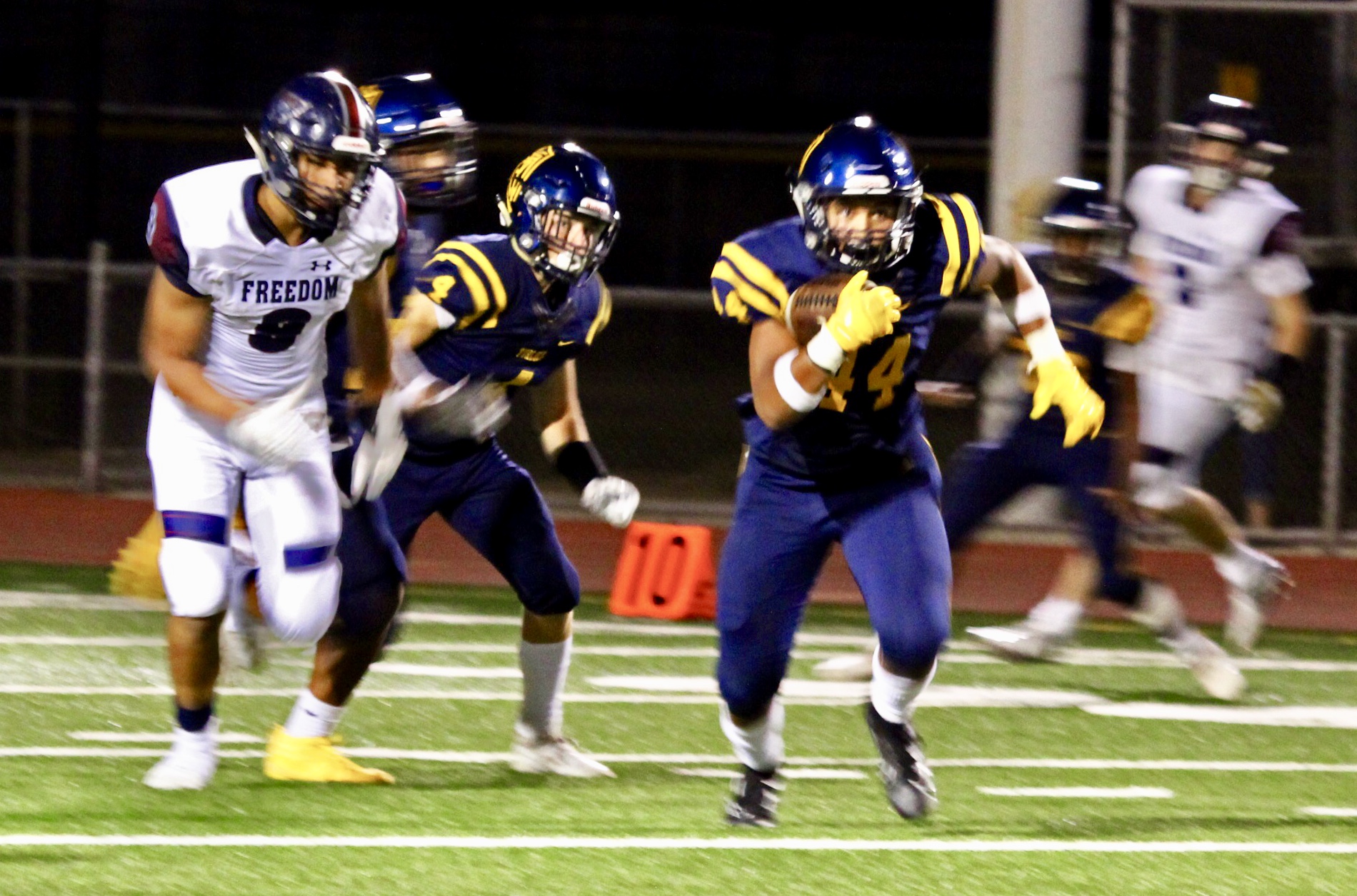 Turlock linebacker Jayden Jackson punctuated a near-perfect night for the Bulldogs' defense with this interception during a 21-7 victory over Freedom on Aug. 23, 2019. (Samantha Schmidt)

Freedom sacked by Turlock: 'We didn't feel like they were ready to play with us'

TURLOCK — About 20 minutes before the start of Friday’s season opener, junior Brock Paslay stood near the water cooler, surveying the crowd, the bench and the cluster forming along the sideline.

The Turlock quarterback, a surfer boy who exudes California cool, was looking not for a cup, but the butterflies. The nerves. The first-game jitters.

They would come, but the flutter would be fleeting.

After a slow start, Paslay and the large-school No. 2 Bulldogs discovered their bark in the second quarter en route to a commanding  21-7 victory over Bay Area power Freedom on a balmy summer evening at Joe Debely Stadium.

The junior varsity game was cancelled because of the heat index, clearing the way for the perennial Division I postseason qualifiers. For the first time in the series Turlock emerged victorious, grounding the Falcons of the North Coast Section with a balanced attack and a mean-spirited defense.

Josiah Gonzales scored two rushing touchdowns, and the defense collected six sacks and chased its third shutout in the last four games, dating back to last season. Freedom spoiled that bid with a touchdown in the final minute, but by then, the headline was written in ink.

“It feels good, especially after the fluke last year,” Turlock senior running back Anthony Frias said, referencing the two-score lead the Bulldogs surrendered in a 42-35 loss at Freedom.

“Beating Freedom is a great feeling. We’re all excited to be 1-0.”

Even without defensive coordinator Raven Keene, now an assistant at the College of the Sequoias, the Bulldogs possess one of the region’s toughest defenses. It helps to have preseason All-Region talent like middle linebacker Jayden Jackson (interception) and Tamirr Bullock (forced fumble) setting a vocal and physical tone.

“He’s that spark on our defense,” Turlock coach James Peterson said of Jackson, the Central California Athletic League’s top returning linebacker. “When he plays well with a lot of energy and makes plays -- like that interception over the tight end -- that’s what we need because our guys rally to that.”

The defense picked up where it left off in 2018, when it closed with shutouts over city rival Pitman and Cosumnes Oaks.

Freedom quarterback Jake Byrne was under constant duress, often forced up and out of the pocket by the Bulldog rush. He completed his first four passes, but then whiffed on seven of his next eight throws as the two-time reigning North Coast Section finalist’s offense grounded to a halt.

Freedom was 1 for 3 in the red zone, including a missed 32-yard field goal on its opening drive. Later, the Falcons squandered a first-and-goal opportunity from the Turlock 10.

“No disrespect,” Jackson said, “but we didn’t feel like they were ready to play with us.”

Trailing 6-0, Freedom was forced into a critical mistake with less than a minute left in the first half. Byrne was sacked at the 10-yard line and coughed up the ball. Devin Bradley recovered and two plays later, Paslay connected on a back shoulder throw to 6-foot-4 wide receiver Holden Baldwin in the end zone to make it 14-0.

Frias salted away Turlock’s first season-opening victory since 2015. He carried the ball 25 times for a game-high 123 yards. Though he walked off the field lamenting missed opportunity — he failed to reach the end zone — his “nasty yards” chewed up clock and created opportunity for his backup, Gonzales.

Gonzales proved to be a goal-line specialist, scoring on runs of 2 and 4 yards. He showed grit on the 2-yard run in the fourth quarter, bouncing off tacklers at the 1 before lunging across the plane.

“Even though (I’m not happy) with the performance I had, it was good for the team. I was taking those hard hits (on) those nasty downs and nasty yards right there; the ones we had to scrap for.”

The win coupled with large-school No. 1 Central Catholic’s last-second loss to Clovis West means the Bulldogs will enter Week 1 as the new No. 1. Frias insists the focus will be on beating another Bay Area giant — not protecting a ranking.

“I think we’re ready for Clayton Valley,” he said. “We had some mistakes (tonight), but we’ll keep progressing.”