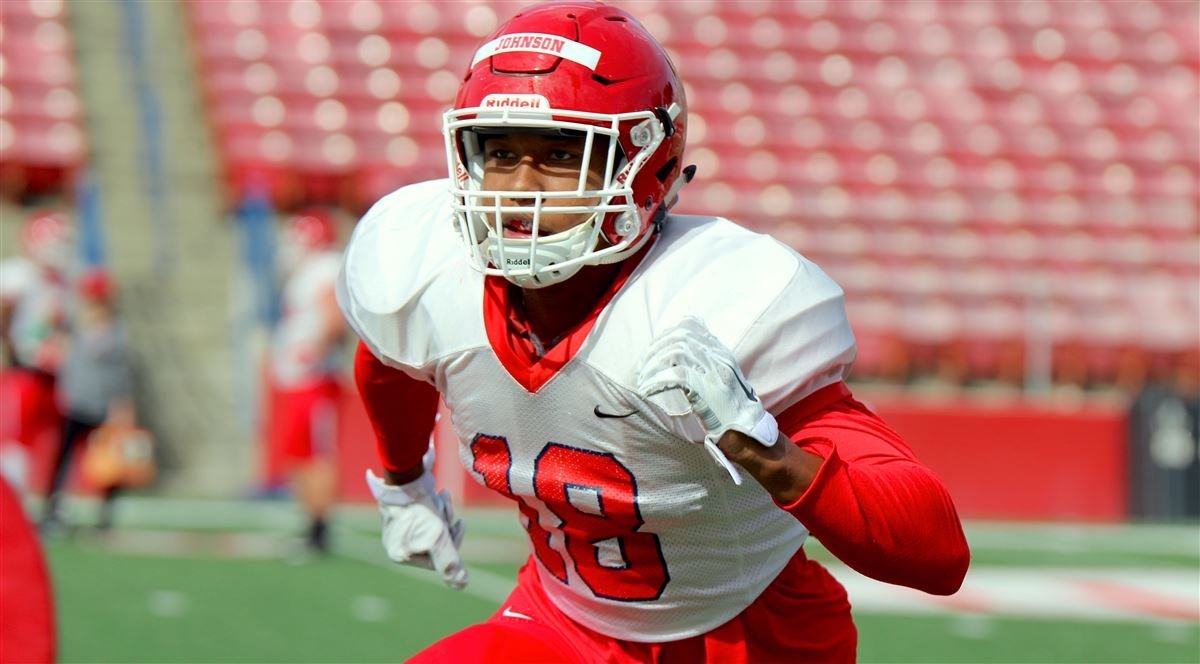 FRESNO — Cheers, hugs and handshakes showered onto Isaiah Johnson as he stepped up the ramp exiting Bulldog Stadium.

A teammate flew past him with a running hug and, on the other side, Fresno State fans shouted his name. Johnson, a true freshman and arguably the Bulldogs’ most surprising contributor, already has become a Red Wave favorite.

“I expected to play more, but I’ll just do my role and go from there,” Johnson said as he approached the Bulldogs’ locker room. “I just don’t take plays off.”

Johnson, a Downey High Knight barely a year ago, has jumped to the next level faster than anyone could have predicted. And, on a smokey Saturday night at the Doghouse, he all but closed the door on the San Diego State Aztecs.

His fourth-down sack late in the fourth quarter sealed Fresno State’s 23-14 win that clinched the Bulldogs’ second straight Mountain West Conference West title. A crowd of 36,123 watched as Johnson — still non-stop after the tackle pushed him aside — turfed quarterback Ryan Agnew with only three minutes left.

“I had to break down that tackle and then the quarterback kind of sat,” Johnson said, “and I just kept my feet moving.”

That’s what Johnson is asked to do on this Fresno State team (9-2, 6-1 in the MWC). He’s deployed on third-down passing situations, and his intentions do not need an announcement. As a defensive end, he lines up in a three-point stance and points himself toward the quarterback.

His clutch sack was his fifth of the season, better than good for someone featured specifically in down-and-distance. During the first half, he spun away from traffic and pressured the QB on another pivotal fourth-down play which eventually set up a field goal.

The headlines will tout teammates such as quarterback Marcus McMaryion, running backs Ronnie Rivers and Jordan Mims and a defense which yielded only eight first downs. A closer look, however, will reveal Johnson’s important contribution.

His story already is amazing. He weighs 228 pounds, already 30 pounds heavier than the day he enrolled. And he hasn’t lost the speed that always made him a threat, on either side of the ball, at Downey.

“It felt a little heavy in fall camp but it feels good on me now,” Johnson said. “It’s all good now.”

Second-year coach Jeff Tedford, who has duplicated his turnaround at Cal with another one at his valley alma mater, said he was not surprised by Johnson’s fast maturation. To him, it was a team effort.

“His position coach, strength coach and nutritionist have all helped him,” Tedford said. “The 30 pounds he’s put on is not fat. It’s good weight.”

“He’s fast and he comes off the snap hard,” said Rice, who caught two passes for 11 yards against the Aztecs. “He creates a lot of problems for the tackle.”

Stanislaus area athletes, fixtures in many Aztec-Bulldog matchups over the years, again were present and accounted for in Fresno. San Diego State tight end Kahale Warring, a Sonora High graduate, has snagged eight touchdown passes in his career. He made three receptions for 23 yards against the Bulldogs, though a key drop on third down late in the game soured his mood.

“I could have played better. That was a big play I should have made,” the 6-6 Warring said. “I could have given us a chance.”

Warring should not be hard on himself. A multi-sport star at Sonora, he excelled in basketball (18.6 points and 10 rebounds per game as a senior). He never gave a thought about football until he was talked into going out for the team as a senior.  In fact, he didn’t even join the Wildcats until five days before the season opener against Oakdale.

“They gave me a wristband. I used it like a cheat sheet. That got me through the season,” Warring recalled. “Football is about being the best athlete. You run faster than the other guy and catch the ball. It’s easier to convert from basketball-to-football than vice-versa.  But I never could have told you that I’d end up playing football.”

It was Johnson, however, who seized the moment in arguably Fresno State’s biggest win this season.  He’s fast, young, getting bigger and, yes, gaining speed.

Ron Agostini was a regional and national award-winning sports writer and columnist for The Modesto Bee for 40 years until his retirement in 2017.