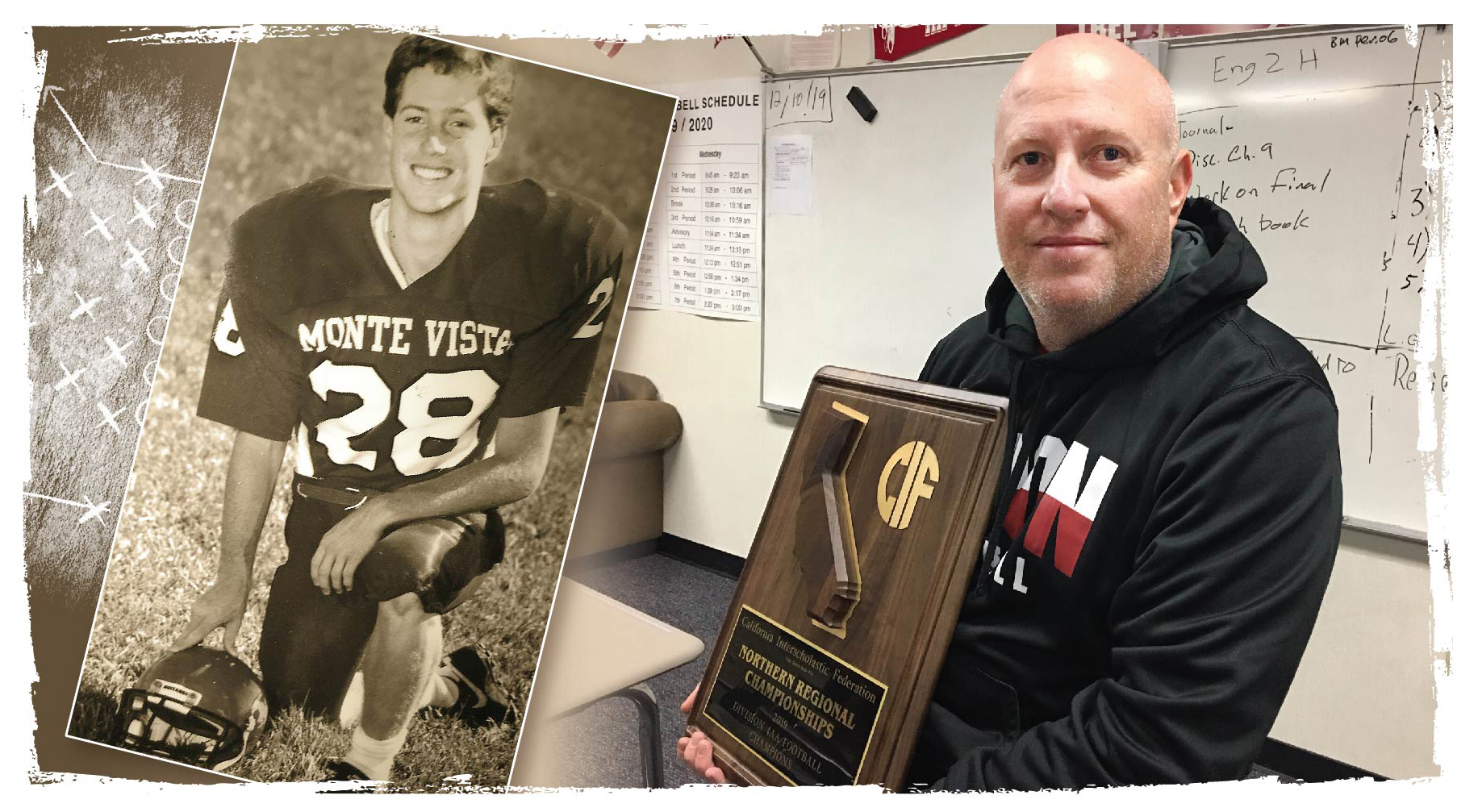 From Danville to the valley: Ripon's Musseman chases more glory

Only this was no ordinary reunion. Musseman’s Mustangs in 1987 went 13-0 and capped it with the kind of win that jumps instantly into local lore.

And Musseman’s role was David, who slayed Goliath – aka mighty De La Salle – via an epic piece of deception that never will be forgotten in Danville.

But big enough to drop a giant.

He was introduced a few months ago along with about 15 of his former teammates before a Monte Vista game. Their favorite subject no doubt was how they shocked De La Salle 14-13 – ending the Lancers’ 44-game winning streak – for the North Coast Section title at the Oakland Coliseum.

Five years later, De La Salle embarked on a 151-game run that has inspired books and movies. But on that night in 1987, the famed Concord school met its match.

Raw video can be found online of the fake punt Monte Vista deployed while trailing 7-6 in the second half. And there was Musseman, No. 28, a wing in the tightened formation, receiving a handoff from behind and between his legs, waiting a beat or two, and dashing to his left while the punter jumped high for a snap that wasn’t there.

“I was supposed to wait longer, but I had to go,” he said.

Musseman outflanked one defender and darted inside another at the 5 to complete his 45-yard journey into the end zone. He soon was mobbed by his teammates and pumped his fists in pure joy.  That team, the only one to go unbeaten in the school’s 54-year history, has been inducted to the Monte Vista Hall of Fame.

Musseman counts the touchdown as the second-best moment of his football career. The first? What's happening right now.

“This has been the best thing for me in my life,” he said.

He will lead his Ripon Indians (13-1) into the CIF State 4-AA championship game Saturday night against Highland of Palmdale (12-3). The game takes place at Ripon’s own Stouffer Field, and everyone agrees it's the most important game in city history.

The Indians, much like Monte Vista vs. De La Salle, have been underdogs for about a month. They were only about 20-deep through the regular season and somehow dodged a rash of injuries. And here they are in the heart of December -- the Sac-Joaquin Section Division V and Northern Caifornia 4-AA champion.

For now, Musseman keeps the NorCal plaque – the first one ever earned by a Ripon football team – in his classroom. He has taught English at Ripon since 2001, when he took the exit off Highway 99 and applied for a job almost on a whim.

“The parallels between what we’re going through now and what we went through at Monte Vista are so similar,” Musseman said. “(People said) ‘They’re too big, they’re too strong, they’re too fast.’  They have said so many times, ‘They’re going to get killed.’”

The coach’s team, pulled together by nine relentless seniors, reflects the plucky undersized over-achiever at Monte Vista. The Indians weren't supposed to reach a state final. Equally surprising was Musseman's path to Ripon.

He graduated from Monte Vista and walked on as a wide receiver at … wait for it … Mississippi. He even wore the uniform for two games but never played.  When partial financial aid did not materialize, Musseman realized his time in the Southeastern Conference was done.

There was another factor: Musseman was befriended on that 1989 Mississippi team by defensive back Roy Lee “Chucky” Mullins. The two planned to have fun after the Rebels’ homecoming game against Vanderbilt. Alas, Mullins sustained a hit during that game that left him a quadriplegic. He died two years later and, to this day, remains an icon at Ole Miss and throughout the SEC.

“He had taken me under his wing. He was an awesome guy,” Musseman said. “I remembered the shock when I visited him in the hospital.”

The tragedy also prompted some sage advice from Musseman’s father.

Another unsuccessful fling at football – on Cal State Fullerton’s final team – was followed by graduation and an open door to the world.

Musseman worked as a paint and lumber salesman and even ran a Subway shop with his brother in Antioch for a few years.

“I always wanted to be a teacher, but people told me, ‘You won’t make enough money,’” he said. “I was making pretty good money and I was miserable.”

Hence the job applications he filed at a few schools and, eventually, Ripon. His life changed.

Musseman worked for six years, while teaching at Ripon, to earn his credential. While on that path, he spent over a decade learning the coaching trade under coach Chris Johnson. When Johnson switched to Sierra High, Musseman was promoted to head coach when the current seniors enrolled as freshmen. The transition was seamless.

“They’re remarkable kids. You see it in the classroom and on and off the field,” he said. “We knew they would be special.”

Today, Musseman calls himself “an outsider” for leading a coaching a staff comprised mostly of Ripon graduates.  He’s earned his bona fides by now, of course, and is quick to thank his wife Michelle for the endless support.

Could there be one more bit of magic for Ripon, much like he experienced at Monte Vista?  Musseman believes his old team's mantra still applies today.

“If you can believe it, you can achieve it.”