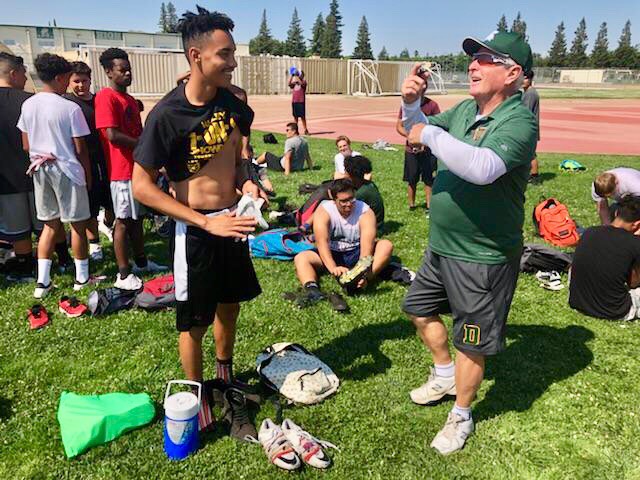 Davis High defensive coordinator Mike Glines talks with players before the start of a summer practice. One of the greatest coaches in Sac-Joaquin Section history,Glines came out of retirement to help longtime friend Tim Garcia. (James Burns)

Tim Garcia has reached into his past to give the Davis High football team a brighter future.

“He was supposed to be consultant on both sides of the ball, watch film and scout,” said Garcia, whose father, Tim Sr., was coached by Glines. Garcia later worked as a lower-level coach beneath Glines at Central Catholic.

“Once he got in, he got a taste of the medicine again and it caught on like wildfire. We’re excited. The kids love him.”

Glines won 12 Sac-Joaquin Section championships and led the Raiders to a CIF State Bowl appearance before retiring in 2007.

He added 11 more section titles as Central Catholic’s baseball coach, securing his place among the section’s most decorated and well-respected coaches regardless of sport.

His return to football coincides with the Spartans move into a new conference. Davis was realigned into the Western Athletic Conference after struggling mightily in the now-defunct Modesto Metro Conference.

The Spartans have won just 12 games in Garcia’s four seasons and haven’t qualified for the playoffs since 2009. After debuting with a promising 5-5 campaign in 2014, Davis has endured losing streaks of six and eight games.

The playing field has been leveled with the creation of a new-look WAC. The conference is now home to Beyer, Johansen, Ceres, Los Banos, Pacheco, Lathrop and Mountain House.

The 2018 season represents a new chapter in Davis football and Glines’ arrival might be the most intriguing subplot.

“Football-wise, I learned from him and I’ve been around him forever, so my personality and DNA is rooted from coach Glines,” Garcia said. “We don’t ever disagree. We speak the same language. I trust him 110 percent and he trusts me.”

The Front Row caught up with Glines, who had this to say about his return to football and his new boss:

FR: What made you want to get back into football?

MG: If you’ve been involved with football as long as I have you end up loving the game. That’s the No. 1 thing.

MG: I’d see Timmy at the Quarterback Club and to hear him and the Johansen coach (Scott Sacuskie) talk, they’re out there and giving their best to every kid that shows up. I was close by and I told Timmy maybe I can help as a consultant. That’s all I wanted to do. Then the defensive coordinator (Chachere) got a job at Ceres and Timmy asked if I’d be the new defensive coordinator. That’s a lot; that’s like being the head coach.

MG: I’m only as good as the guys around me. I’ve always had good people around me and that’s what made us so successful. I got six or seven guys that love the game, too. It’s not for the money, that’s for sure.

FR: How is the experience different than Central Catholic?

MG: Oh, it’s different. We’re picking up kids and taking them to 7-on-7. We’re helping with equipment. We have kids that don’t have shoes. I’m doing a fundraiser this weekend — we’re parking cars to help with equipment. The kids all seem to appreciate it. They’re coming up after practice and saying, “Coach, glad to have you here.” Timmy says there has been a change.

I won’t say it’s any less work. It might be more work, but it’s very rewarding when you’ve got kids coming up and shaking your hand after practice and thanking you for being there.

FR: How will you measure success at Davis?

MG: It’s already being measured. We’ve all been winners before and we want to seem them (the players) become that. We’re teaching them about accountability and responsibility, and hey, we’ll let the chips fall where they may.

FR: Can Davis compete in the Western Athletic Conference?

MG: We’re planning on winning football games. We’re not rebuilding. We want them to win them all. How can you ask anyone to give their best and their maximum effort if you only think they can win four games? If I’m a senior, I want to win them all and have a championship year. That’s how we’re going to coach.

FR: You helped raise Garcia as a football player and later a coach. What’s it been like working for him?

MG: This guy really goes out of his way for his players. I’m honored that he thought I can help. The biggest reason I’m back is Timmy Garcia, but now that I’m here … I’m spending five hours a day on football. It’s driving me nuts. I’m consumed again.