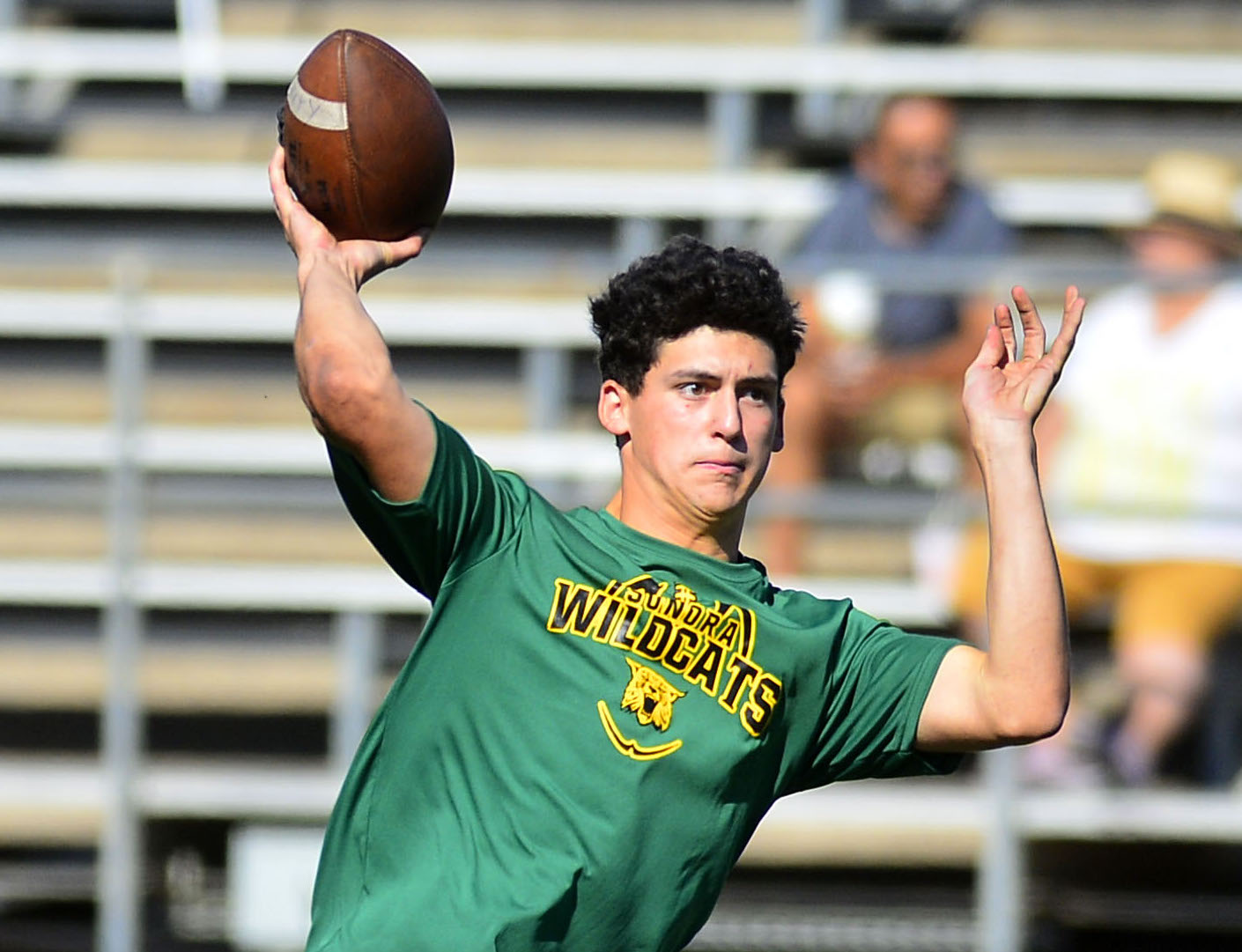 Sonora High quarterback Jake Gookin fires a pass down field during a passing tournament at Downey High over the summer. (John Westberg)

Gold in the hills: Big-time buzz building around small-school power

Since dropping into a small-school conference, the Sonora High football team has set the standard for "The Little Giants" in the southern half of the Sac-Joaquin Section. The Wildcats are undefeated in the Mother Lode League and showing no signs of slowing down.

Here's an early look at the top small-school football teams in the area, beginning with Sonora, The Front Row's clear No. 1. Remember, it's early. The season doesn't kick off until Aug. 17, but the hype machine began turning in May.

Feel free to share information about your favorite teams, as well as news tips at frontrowpreps@gmail.com.

Now, for the early projections, with last season's record in parenthesis:

1. Sonora (9-3): Last season, injuries forced the four-time defending Mother Lode League champions to speed up the development of promising stars like CJ Castleman, a track star, and Evan Bearden, the MLL’s defensive player of the year. Along with quarterback Jake Gookin, who rushed for more than 1,000 yards, the Wildcats will try to recreate the magic of 2015, when they won a section title and hosted a CIF NorCal bowl. Season opener: at Oakdale, Aug. 17.

2. Ripon (8-4): The Indians captured a share of the Trans-Valley League crown with a late-season push fueled by 6-foot-1 quarterback Ryan Daggett, a dual-threat with complete mastery of Chris Musseman’s offense, and running back Roland Davis, whose hands are as valuable as his feet. Season opener: vs. Weston Ranch, Aug. 17.

4. Modesto Christian (7-6): The Crusaders lost a lot of firepower to graduation, including tight end Rory Hanson and running back/linebacker Paul Puaauli, but coach Mike Parsons returns quarterback Hayden Sauser, who sat out the Sac-Joaquin Section Division VI final with an injury, two-way starter Isaac Schinmann and rising Division I recruit Xavier Carlton, who has received offers from Cal and Notre Dame, among others. Season opener: vs. Sierra, Aug. 17.

5. Orestimba (10-1): The Warriors have solidified their place as one of the premier small-school programs in the Central Valley, largely because alumnus Aaron Souza knows how to develop talent and chemistry. He will build around one of the area’s top all-around athletes in Tyler Vargas, a dynamic talent in all three phases, but are the graduation losses of Tymon Bolden, Octavio Perez and Jamie Munoz too much to overcome? Season opener: at Bret Harte, Aug. 17.