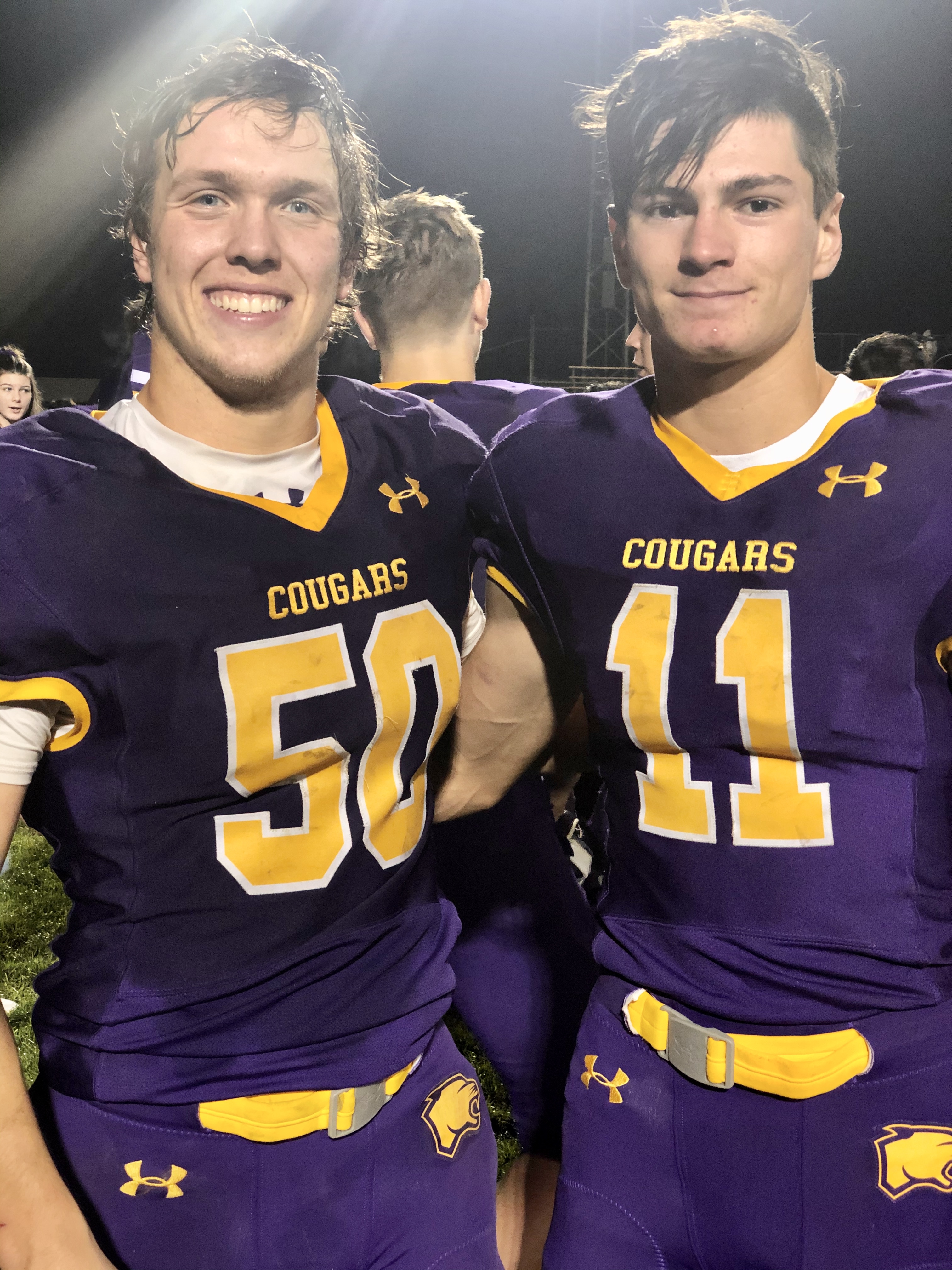 Escalon's Jacob Walden (left) and Garrett Nash returned fumbles for touchdowns on back-to-back possessions in the third quarter as the Cougars rolled to a 40-14 victory over Sonora in the Sac-Joaquin Section Division VI semifinal on Friday, Nov. 22, 2019.

ESCALON — The Escalon football team is used to chasing the vapor trail left by its star-studded backfield, but on Friday evening a pair of defenders showcased breakaway speed.

Jacob Walden and Garrett Nash highlighted a devastating flurry at the end of the third quarter with back-to-back fumble returns for a touchdown as the Cougars clinched a Sac-Joaquin Section Division VI finals berth with a 40-14 win over Sonora.

Each of Escalon's last two seasons have ended in the semifinal round, and that heartache drove the Cougars' leadership.

"This feels awesome. It's been three years in the making for some us, the three-year varsity starters," said Walden, the reigning TVL defensive MVP. "It's made us better, especially now. It's helped us in the long run."

For the second week in a row, Escalon had to beat an opponent for the second time this season. On Sept. 6, the Cougars rolled Sonora, 35-13, one of four consecutive losses by the Wildcats, the Mother Lode League's resident king, to start the season.

On Friday, the rematch was decided in the final minutes of the third quarter. Escalon scored 26 points in less than five minutes, blowing open a tie game. Fullback Luke Anderson (4-yard run) and wingback Kaden Christensen (69-yard reception) started the flurry with familiar highlights, but the defense, often overlooked, punctuated the win with a pair of fumble returns in about 60 seconds.

"We expected this would be a one-score game the whole time," Nash said.

Walden scooped a ball off the chilled turf at Lloyd Engel Field and bolted 32 yards to make it 33-14. On the next drive, Nash returned a fumble 55 yards to send the home sideline into a frenzy. Each step in open space, Nash said, put miles of distance between this year's team and its recent predecessors.

Escalon forced three turnovers and looked vulnerable just once, when Josh Fernandez weaved his way in from 33 yards to tie the game at 14-all early in the third.

Escalon advances to a section final for the first time in seven years and the emotion of ending such a drought attached itself to Beam's words during the postgame huddle. The Cougars, an eight-time section champion, last appeared in the 2012 Division IV final, losing to Central Catholic.

"It's been seven years since we've played for a blue banner and these guys were little kids at the time. We've been close and all that's done is fuel the fire," Beam said. "This is a great group of kids and a great group of seniors, on and off the field. Their hard work is starting to pay off, we're starting to get healthy at the right time, and all we can ask for is a shot in the championship game."

Colton Panero scored two touchdowns for the Trans-Valley League co-champions, who will renew one of the region’s great rivalries next week against rival Hilmar. The Yellowjackets defeated Ripon Christian in the other semifinal, 47-28.

Hilmar has won 10 of the last 18 meetings in the series, including three of the last four games, but Escalon defeated the Yellowjackets 34-21 on Sept. 27.

"I couldn't imagine playing somebody else. What better way to end it, win or lose, then against Hilmar, and their tradition against our tradition," Beam said.  "That's what we always want. I don't think any person, or any player, or any fan from either town will complain. People want to see this game and it always lives up to the hype."