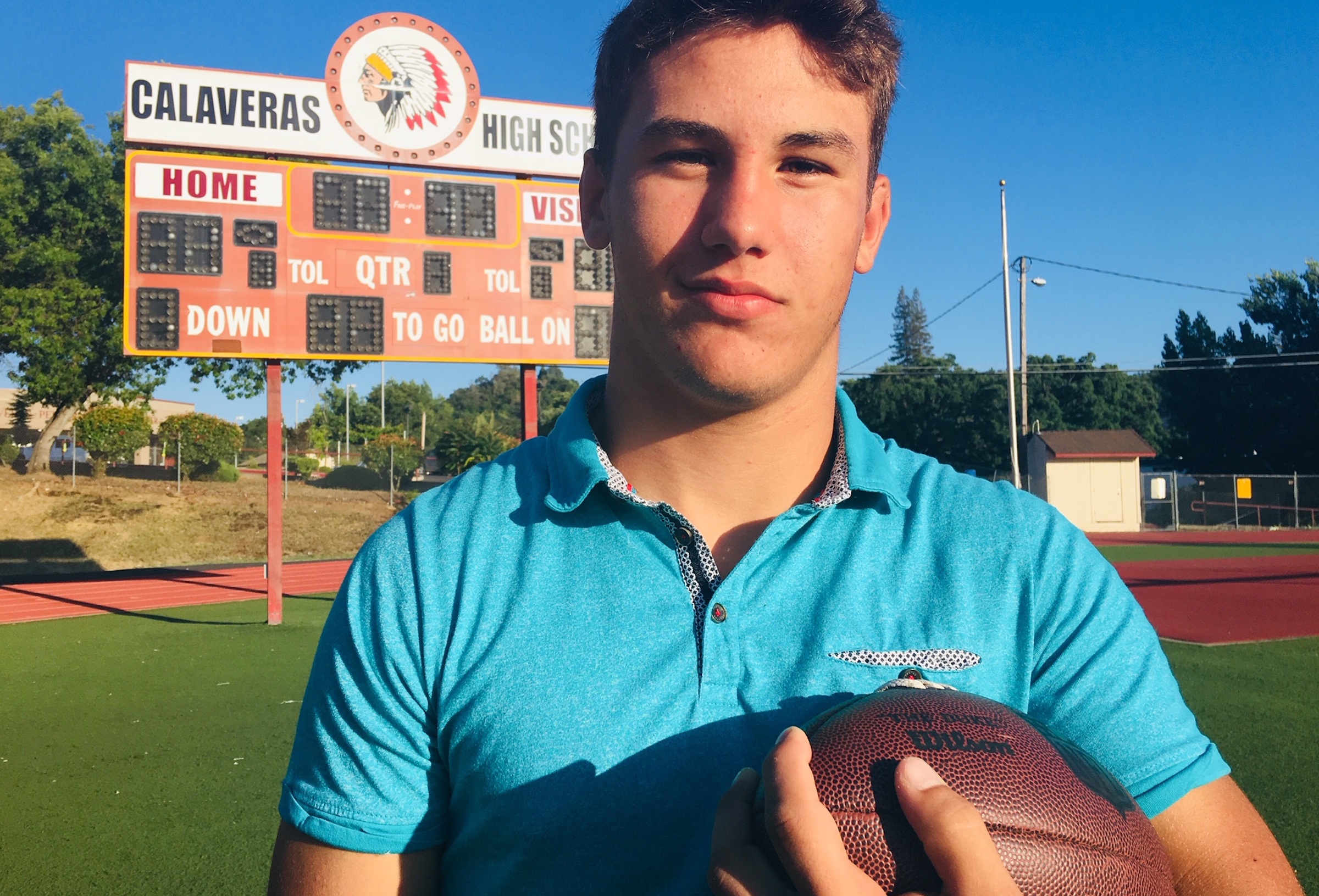 Calaveras' Donivan Giangregorio is a two-way all-Mother Lode League selection, a CIF State wrestling qualifier and the top student in his class.

SAN ANDREAS – One of the Mother Lode League’s top athletes insists on excellence in the classroom, on the football field and the wrestling mat. He also doesn’t mind being a little goofy.

Calaveras High junior Donivan Giangregorio likes all the above, especially the goofy part.

“I’m definitely goofy. I’m one of the class clowns, for sure,” he admitted. “I’m not that smart except for books. I just make ‘em laugh, make ‘em uncomfortable.”

Maybe that’s peer-group cover for Giangregorio, who’s ranked No. 1 academically in his class. Equally true Is the discomfort he brings for all opponents in athletics. As a sophomore last fall, he earned all-MLL honors as a two-way lineman who led the league with seven quarterback sacks. It wasn’t by accident.

“I prefer defense,” he said. “I like to hit people … making a big hit, the ones everyone can hear.”

First-year Calaveras head coach Doug Clark, who replaced Jason Weatherby after his successful 11-year run, will feature the 6-foot-1 200-pound Giangregorio. In fact, Clark probably will hand him the ball as a punishing fullback, an annual staple in the Calaveras attack.

“If I don’t put the ball in his hands this year, I’m crazy,” said Clark, an 18-year veteran at all levels of the Calaveras staff.  “Donivan is just a competitor and fun to be around. There’s not a serious bone in his body, until he goes into competition mode. Then the switch goes on.”

Clark, also a longtime wrestling coach, had the perfect seat for Giangregorio’s top-tier sophomore season. The 182-pounder went 37-8, capped by a 1-2 showing at the CIF State Wrestling Championships in Bakersfield.

To get there, he won the MLL, the Sac-Joaquin Section D-V and was the runner-up at Section Masters. Giangregorio also became the first Calaveras product to win his weight class at the Tim Brown Memorial at Sacramento. Recently, he placed the third in the Cadet Nationals (16-under) at Iowa.

To answer the obvious question, Giangregorio has no preference. Whatever he’s doing – football, wrestling or a term paper – he’s into the moment. And with less than four weeks before the first practice, Giangregorio is all about football.

The big elephant in the MLL’s room is Sonora. Since their switch from the Valley Oak League in 2014, the Wildcats have gone 29-0 in the foothills conference. That makes them the obvious target.

Calaveras has placed second behind Sonora three times and no lower than third.  Amador went 14-2 in 2016 and won the D-VI title…but lost to Sonora.

The Wildcats were hit hard by graduation, however, and could be beatable. Until then, of course, they’re the favorites. Calaveras figures to contend, and the Amador varsity is spiced by two classes that combined for only one loss at the JV level.

Toward that end, Clark has retained Gil Valtierra as defensive coordinator and added Manny Mossa, a longtime Clark assistant, as offensive coordinator. Sophomore Travis Byrd and senior Nolan Dart will vie for quarterback to complement Giangregorio and wing Johnny Lozano, who placed sixth in the 400 meters at Section Masters.

“I see a pretty tight race. Sonora seems to always figure out a way,” Clark said. “Amador has had stellar JV teams. Rick Davis (one of Clark’s teammates at Sonora High) is back at Argonaut for his second run.”

Gaining traction in the MLL is not easy. Consider 2019 Bret Harte graduate Ryan Kraft, who passed for 3,641 yards and 44 touchdowns and rushed for 13 TDs over his three varsity seasons. He squeezed the Bullfrogs into the playoffs as a sophomore.

But as a senior, Kraft was bothered by an ankle injury and was sacked 26 times, twice by Giangregorio. The Bullfrogs went 2-8 and winless in the MLL.

“Ryan was a once-every-10-years athlete that comes through,” Bret Harte coach Casey Kester said. “We changed the offense to take advantage of his ability.”

Kraft, in his final game, passed for three touchdowns and rushed for another as Bret Harte extended Calaveras – its ancient rival – until the final 10 minutes and fell 47-27.  The brick wall along the home side at Calaveras’ Frank Meyer Field still has the fading, but still legible, white spray-painted  sign, “19-6 BH.”

No one knows who did the deed, and Calaveras coaches would rather not wash it away.  It serves as a reminder, the final score of Bret Harte’s last victory over its archrival … in 1999.

Giangregorio, a Valley Springs resident, refers to the Bullfrogs as simply “BH” and, to no one’s surprise, doesn’t wish for the streak to be snapped on his watch. He’s always been inspired by older brother Anthony, who could start at safety this fall at Southern Oregon.

“He always beat me up a little, but he was a good brother,” Donivan said. “He only beat me up when he needed to, when I was a jerk. I always wanted to be better than him. I tell him that all the time and he says, ‘I’m still the better looking brother.’”

And, naturally, a laugh or two along the way.