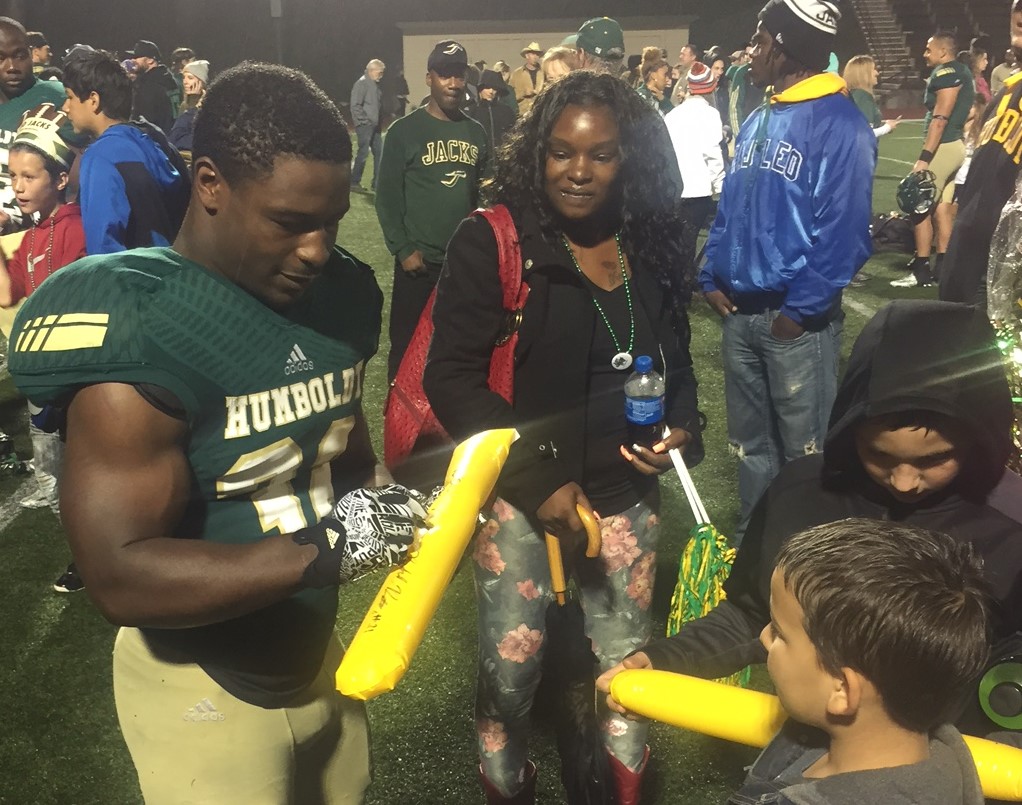 Ja'Quan Gardner signs autorgraphs for young Humboldt State fans after a game during his sophomore season. The former Central Valley High School star signed Monday with the San Francisco 49ers and is expected to suit up for Thursday's game against the Los Angeles Chargers

Former Central Valley High School star Ja'Quan Gardner was signed Monday night by the San Francisco 49ers and will join the team in time for Thursday night's game against the Los Angeles Chargers.

Kickoff is slated for 7 p.m. and the game will be televised on CBS.

"I'm on my way to the 49ers facility," said Ja'Quan from the road Monday night. "I'm looking forward to making the best of it."

Gardner went undrafted in the 2018 NFL Draft, but had been invited to rookie minicamps for the 49ers and the Los Angeles Rams. Since then, however, he's been shopping his talents to the Canadian Football League and the upstart Alliance of American Football.

But then the call came from 4949 Centennial Blvd.

"It's not a guarantee," said Gardner. "They want me to check into a hotel and tomorrow I'll have a physical. If I pass, from there I go to practice, but nothing in the NFL is a guarantee."

Gardner does have the luxury of being familiar with some of the players and coaches after attending rookie minicamp this summer.

"I feel like when I went to the minicamp, from the coaching staff to the players, it was a good squad," said Gardner. "I feel comfortable there. I formed a really good bond with the running backs coach (Bobby Turner). I'm looking forward to working with him.

"I'm excited, nervous, all of that. I'm just ready to get on the field."

At 5-foot-7 and 205 pounds, Gardner is undersized by NFL standards. But according to his former high school coach, Jason McCloskey, teams would be making a mistake to underestimate the diminutitve running back.

"I heard on good authority that it wasn't his height and weight but that he didn't have a blazing 40 time, combined with him being 5-7 and 200 pounds," said McCloskey, now coaching at Mountain House. "But you just have to put on the tape and talk to the guy. The reason we all gush over the guy is he's a unique person and a pleasure to be around. I've been coaching 20 years, all kinds of sports, and I've never seen anybody with such a love for his teammates and the game. That just oozes out. It's hard to be mad when you're around him."

McCloskey thinks Gardner, given a chance, will show enough on the field and in the locker room to make any team want to take a chance on him. And that's all the amiable Gardner wants ... a chance.

"I'm happy and excited to get this opportunity," said Gardner. "And, of course, I'm looking long term, but right now I'm just focused on day by day and just trying to prove myself."