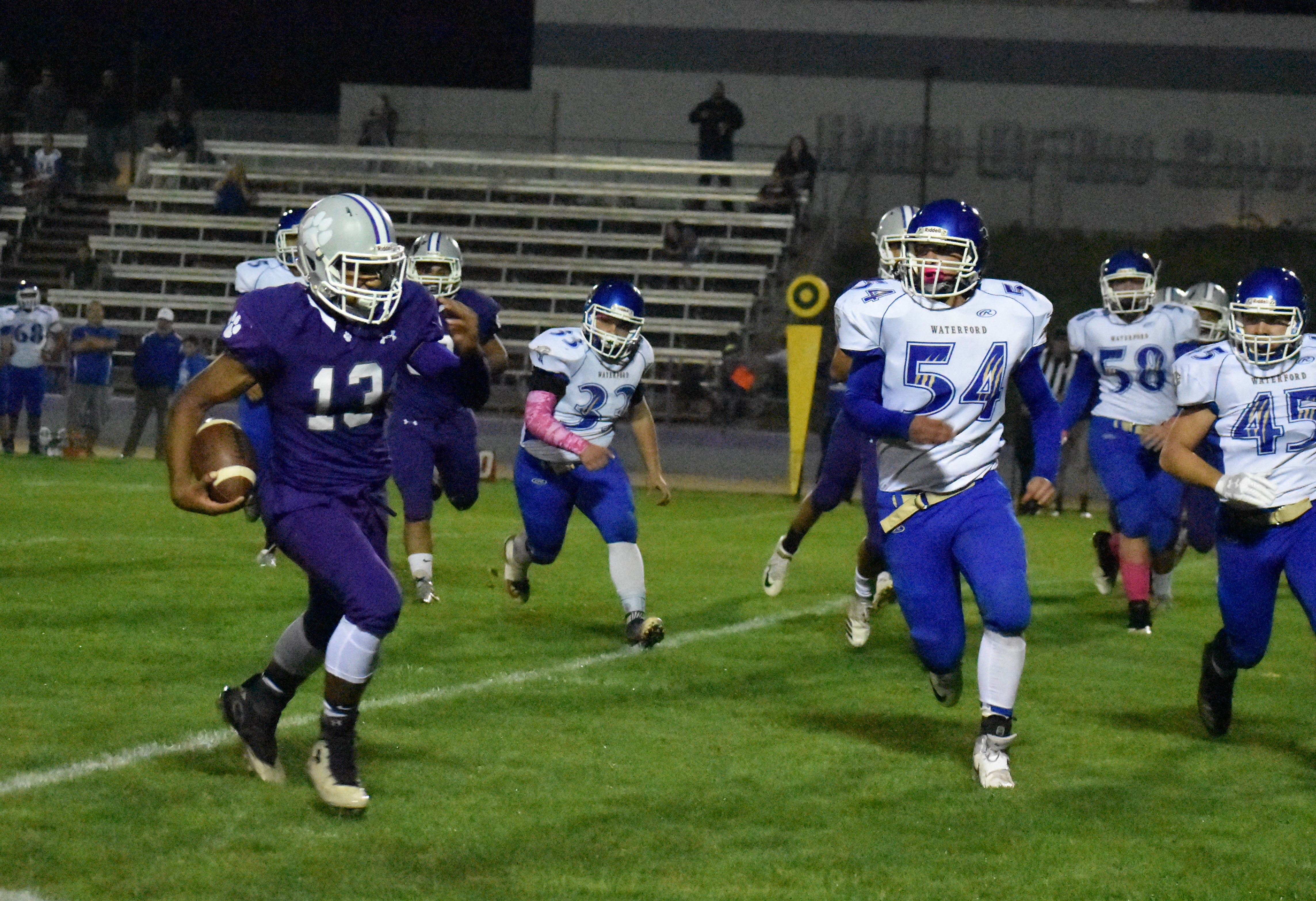 Steffin Winston, who leads Denair's Wing-T rushing attack with 1,249 yards this season, will lead the Coyotes in the Division VII playoffs when they play Nov. 9 against either Millenium or Gustine.

When Anthony Armas told his old coach, Don Curtiss, that he was considering the vacant head coaching position at his alma mater, Denair High School, his former coach asked him a question: “Are you sure you want to do that?”

The program was in tatters, having gone just 7-33 in the previous four seasons, and turnout was suffering, in the stands and on the field, where woefully thin numbers made it tough to compete. More than that, the Denair Unified School District was in financial crisis, suffering layoffs, pay cuts and barely avoiding financial takeover by the state.

“I think I saw that down the road it could be better,” said Armas, who left his job as an assistant at perennially successful Pitman to take over at Denair. “I went to school here, I coached here, I knew what to expect.”

So confident was Denair High School that it was on the right track after hiring Armas that the school eschewed a move into the Central California Athletic Alliance during Sac-Joaquin Section realignment, actually fighting to stay in the Southern League.

“We all thought that we could be competitive in the Southern League,” said Armas, who was 3-7 in his first season, finishing some games with just 12 players.

“When I interviewed for the job I said that in three to five years we could turn this thing around,” said Armas. “I thought we could be successful, not necessarily competing for a section title.”

Denair has a first-round bye and will await the winner of Friday night’s game between No. 5 Millennium and No. 4 Gustine, teams the Coyotes already have beaten by 38 and 35 points, respectively, this season.

Looking at the other side the D-VII bracket, Woodland Christian and Golden Sierra play Friday with the winner taking on No. 2 Big Valley Christian. Considering outcomes against common opponents with No. 2 BVC — Waterford,  Le Grand, Millennium, Stone Ridge Christian and Woodland Christian — it’s clear that the Coyotes are the overwhelming favorite in D-VII.

And if they manage to bring home the blue championship banner, it’ll be on the strength of a Wing-T offense that has produced a 1,000-yard rusher in Steffin Winston (1,274) and two others — Hunger Musgrave (969) and Dylan De Silva (746) — who are approaching the milestone. Drew Pritchard (537) gives the Coyotes four backs with more than 500 yards on the ground.

“We feel like we’ve set a way for young people that are from here,” said Winston. “It would be amazing for a small school like us to win a section title. Amazing.”

But the lessons of the recent past will keep the Coyotes from getting ahead of themselves.

Still, it’s hard not to peek into November

Two more wins would earn the Coyotes a section title and a berth in a Northern California regional bowl game, with a shot at a state title game up for grabs.

“There’s a history here,” said Armas, who after graduating from Denair in 1997 played two years at Modesto JC for Steve Da Prato. “People have kind of forgotten. They’ll ask, ‘Is this the best team ever?' And I say, ‘No, there were some 10-0 teams in the past.’ ”