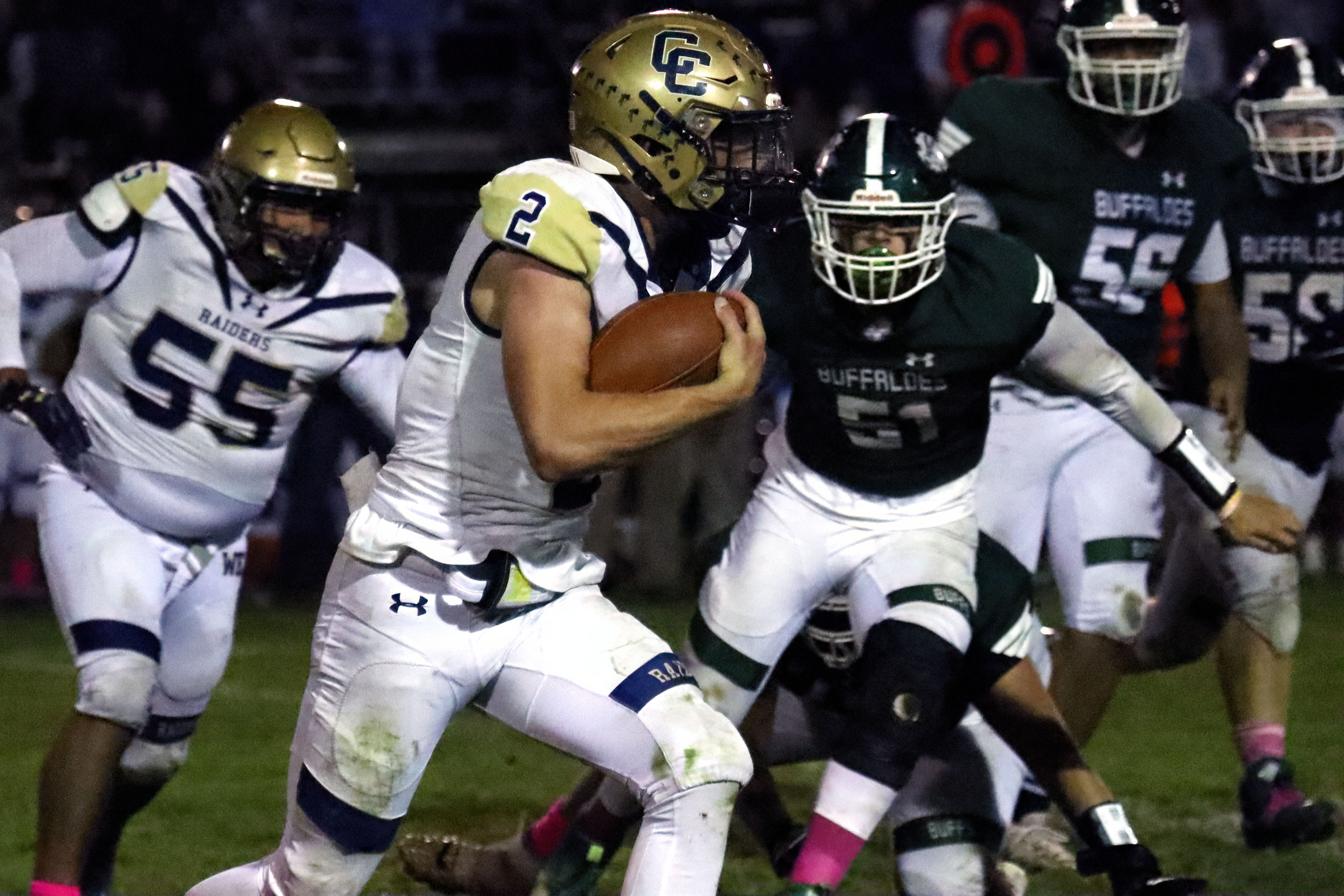 Tyler Jacklich was vital to Central Catholic’s victory over Manteca, which all but sealed the Valley Oak League championship for the Raiders. Jacklich rushed for 163 yards and scored four touchdowns. (Samantha Schmidt)

'He waited his turn': Hard work, patience pay off for Central Catholic's Jacklich

On a chill night in October, the Raiders stared down the Herd in the most highly anticipated match up in the VOL: Central Catholic High School versus Manteca.

The Buffaloes came into the game with a 7-0 record and ranked No. 1 in the FrontRowPreps.com large-school poll. After an arduous preseason that included national powerhouse teams like Serra of San Mateo and St. John Bosco, the Raiders came in with a deceptive record of 4-4.

While there has been some criticism of Raiders’ head coach Roger Canepa’s scheduling, senior running back Tyler Jacklich was grateful for the rigorous preseason.

“It helped us see the full potential of our team. We learned something from every single game,” he said. “Every team has to be able to take a loss and know what to do with it to be successful.”

Jacklich knows what it takes to be successful: diligence, patience, and teamwork. He spent much of his junior year in the shadow of former Central Catholic stars Aiden Taylor and Julian Lopez, two of the region's top running backs. Taylor topped 2,000 yards and ran away with the Player of the Year award.

“He just waited his turn. He worked hard in the offseason, got bigger, got stronger,” said Canepa. “He’s worked hard and all that hard work has paid off for him.”

Of the remaining local running backs, Jacklich is leading the standings for total rushing yards with 1,758 yards, nearly 400 more yards than Escalon’s Ryker Peters. He’s also scored 24 touchdowns this year. He credits his teammates for his success on the field.

“Honestly, the whole reason I have the yards is because of my line,” Jacklich said. Thinking back to the Manteca game, he continued, “What really helped me during that game was our line, they were going hard all day, and the hole was always there for me to hit. Once it's open, all there is for me to do is run the ball.”

Canepa appreciates Jacklich’s value as a team player, “Tyler wants the best for his teammates. He does a good job of rooting for guys who don’t play as much. His teammates respect him.”

Raider quarterback Tyler Paul Wentworth agreed and said, “He's a great teammate, he works hard, and he cares about his team.”

When asked why he wanted to start playing football at 5 years old, Jacklich answered immediately: “Because of my older brother for sure.”

Fans may remember his brother Kyle, another standout Raider running back who graduated in 2019 and went on to play for Northern Montana University.

“I always looked up to him,” the younger Jacklich continued. “He was a football star and I wanted to be just like him.”

Jacklich currently holds three offers (Idaho, Southern Utah, and Western Oregon) to play in college and Canepa is hopeful that interest will continue to pick up during playoff season. On Friday, Nov. 11, fifth-seeded Central Catholic will travel to Elk Grove to take on No. 4 Monterey Trail in the quarterfinals of the Sac-Joaquin Division I playoffs.