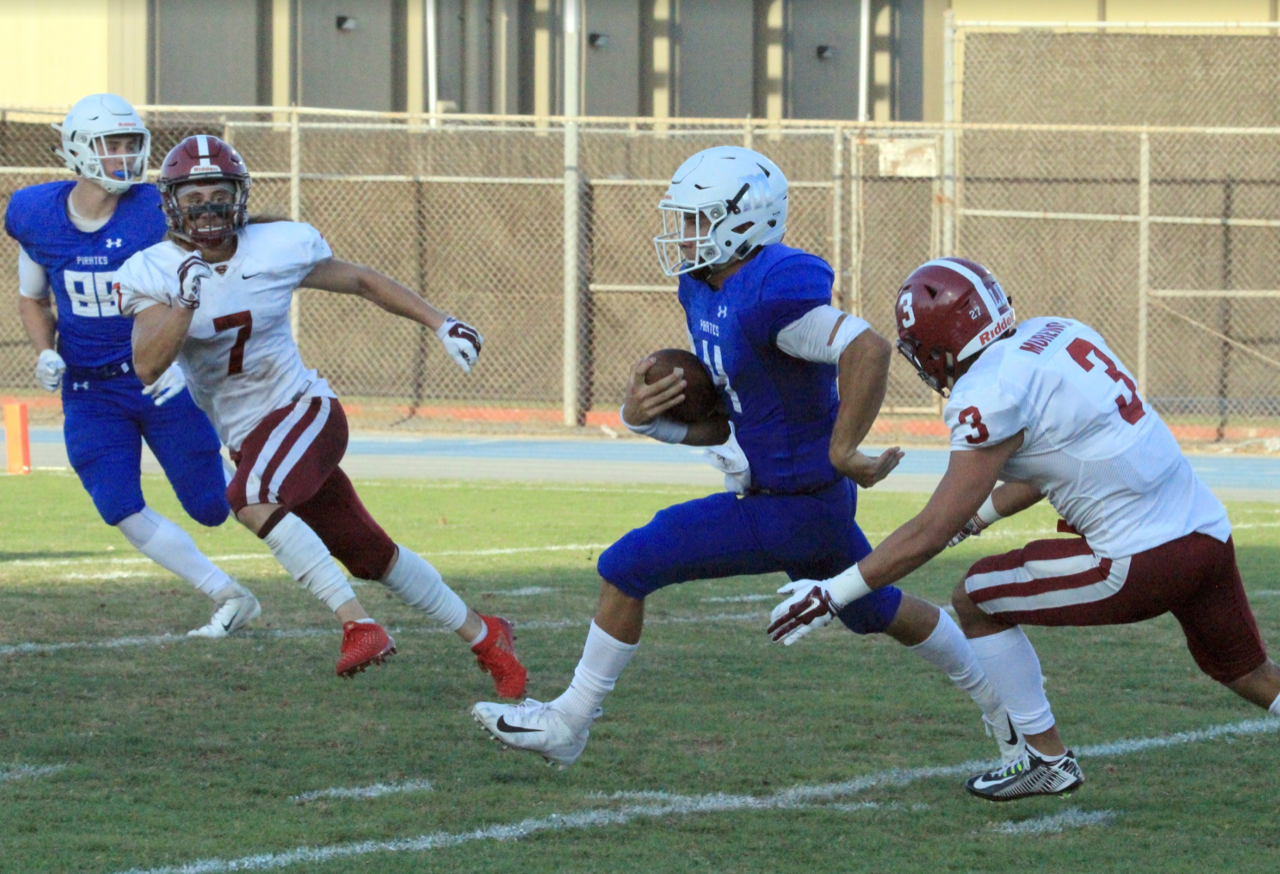 MODESTO – Danny Velasquez left Portland State and a scholarship after one year and returned to Modesto Junior College, a decision celebrated by MJC coach Rusty Stivers.

“I jumped for joy,” Stivers said. So did most of the 1,500 at MJC Stadium on Saturday night.

Velasquez, the elusive engineer of the Pirates’ NASCAR offense, scalded Sierra for four touchdown passes during an impressive 50-20 non-league win over Sierra of Rocklin.

MJC fans grew familiar with Velasquez during his solid 2017 season, but he’s grown as a quarterback. That said, he pulled a virtual magic trick, a David Copperfield illusion, to find Brandon Gray for a 25-yard touchdown late in the half.

Velasquez, surrounded by the Sierra pass rush, somehow escaped to his right and dished to Gray at the 20. Gray pivoted to his left and -- like his quarterback -- shed tacklers for an unlikely TD.

“Nobody grabbed me, so I kept running,” Velasquez said. “I honestly don’t remember. It’s kind of a blur.”

Worry not, Danny.  Your coach won’t forget it.

“It’s kind of unfair,” Stivers said. “I wouldn’t like to be on the other sideline and see a guy running around and making a play like that. Thank goodness he’s on our team. He is a magician.”

“We take a lot of pride in our defensive unit,” Noonan said.“We had two of our better players miss him (Velasquez) in the backfield. He’s just a playmaker.”

The 95-degree heat for MJC’s home opener hardly bothered Velasquez or his teammates. He opened the night with a pump-fake and a 55-yard scoring strike over the middle to Lucas Curtis. MJC scored the game’s first 14 points, in fact, after Michael Ramos (15 carries,158 yards, 2 touchdowns)  stepped into the end zone from the 5.

Sierra responded but, for the second straight game, MJC backup quarterback Brett Neves cashed in a touchdown on a gadget play. On fourth down from the Sierra 20, Neves took a long lateral from Velasquez and hit a diving Gray in the back of the end zone.

Velasquez, who accounted for 316 yards of total offense, found Gray (5 catches, 108 yards, 3 TDs) for two additional touchdowns and capped his game with a 28-yard TD pass to Kharyem Mitchell.

“Our defense held them scoreless in the second half and we put it all together as a team,” Stivers said.

Another test awaits MJC next week at home against 2-0 City College of San Francisco. The Pirates’ season upgraded, however, when Velasquez – unhappy with Portland State’s plans for him as a safety – elected to bounce back home.

“I can’t say it was a mistake. I grew up a lot from the whole experience,” he said. “It was better for me to come back … I’m happy.”

So are the Pirates.