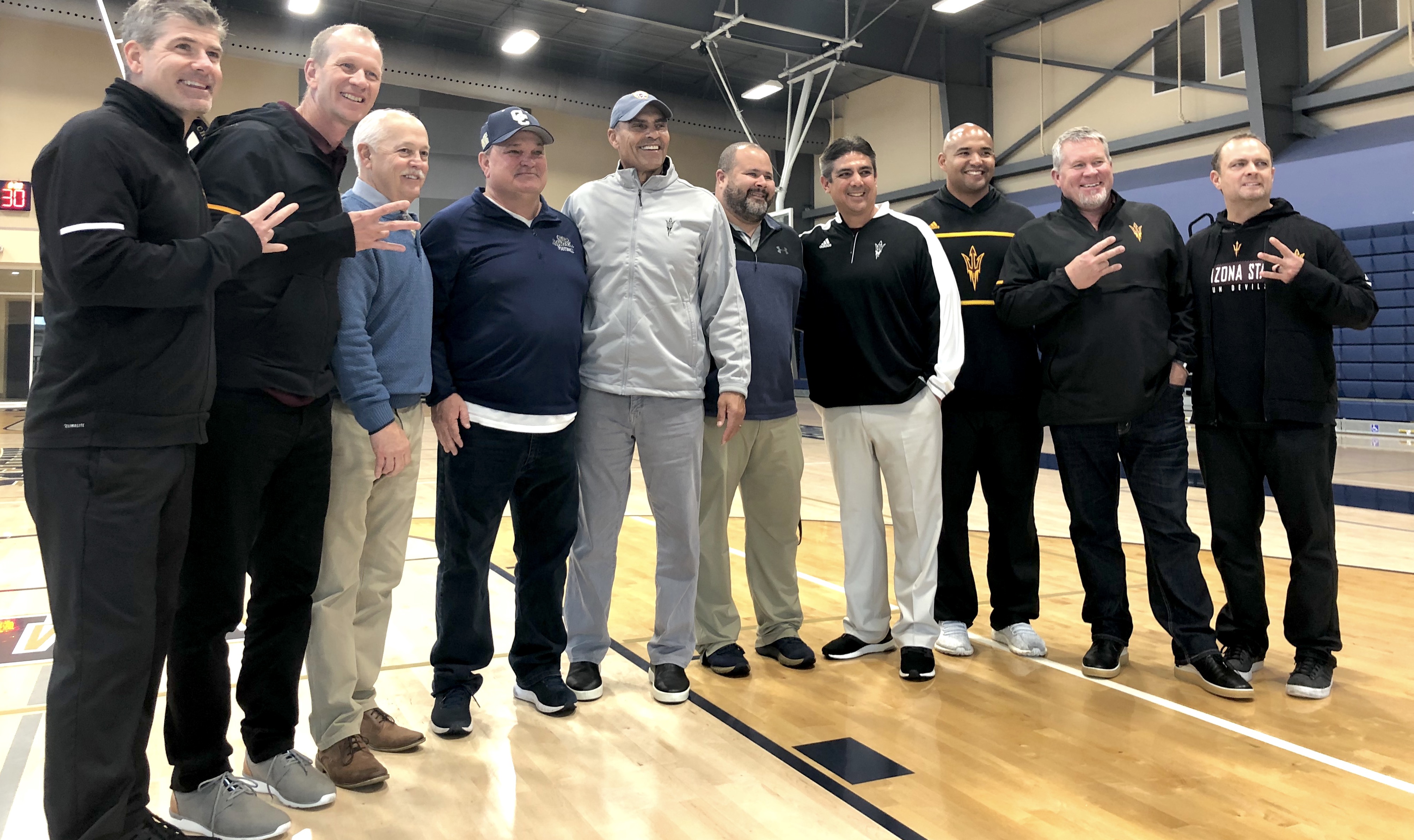 Not even a contingent of Sun Devils could shoo away the rain clouds that shrouded the Central Valley on Tuesday.

But it wasn’t for a lack of trying.

Arizona State head football coach Herman Edwards and eight members of his staff made a recruiting tour through the heart of California, stopping in the Bay Area, Sacramento, Modesto, and Turlock before bunking down for the night in Merced. Day 2 of the tour will take Edwards and his coaches to Fresno, Bakersfield and then into Los Angeles.

Central Catholic coach Roger Canepa, who has developed a relationship with Edwards over recent years — Canepa was on Edwards’ staff for the 2015 Under Armor All-America Game and Edwards has delivered the pregame speech for a Central Catholic game — greeted Edwards and his staff at the CCHS administrative offices. The Arizona State staff was given a tour of the facilities, and kept a watchful eye on several promising recruits who were working out in the school’s fitness center.

NCAA rules prohibit Edwards and his coaches from speaking about specific players.

“There’s a lot of history in this school,” said Edwards, a former NFL player who coached the New York Jets and Kansas City Chiefs before a stint as an analyst at ESPN. “My wife was an alum of this school. … I was fortunate enough to live here for two years, with my wife, and our daughters went to the little elementary school (St. Stanislaus) over here, so we’re familiar with Modesto, and with that being said, Coach (Canepa) has some athletes that we’re looking at, and that’s why we’re here today.”

Though Edwards couldn’t comment, it’s no secret that one of the players on Arizona State’s radar is Dawaiian McNeely, a 6-foot-2, 206-pound senior who has drawn additional interest from Oregon State, Fresno State, Colorado State and Kansas.

“It’s definitely humbling,” said McNeely. “It obviously makes you feel good, but you’ve also got to humble yourself while the whole process is going on.”

McNeely said he’s close to making a decision, but won’t announce his college choice until Feb. 6, the traditional signing period for football.

McNeely played running back and defensive back for the Raiders and helped them to the Sac-Joaquin Section Division II championship game, where they lost 20-17 to eventual NorCal champion Del Oro,