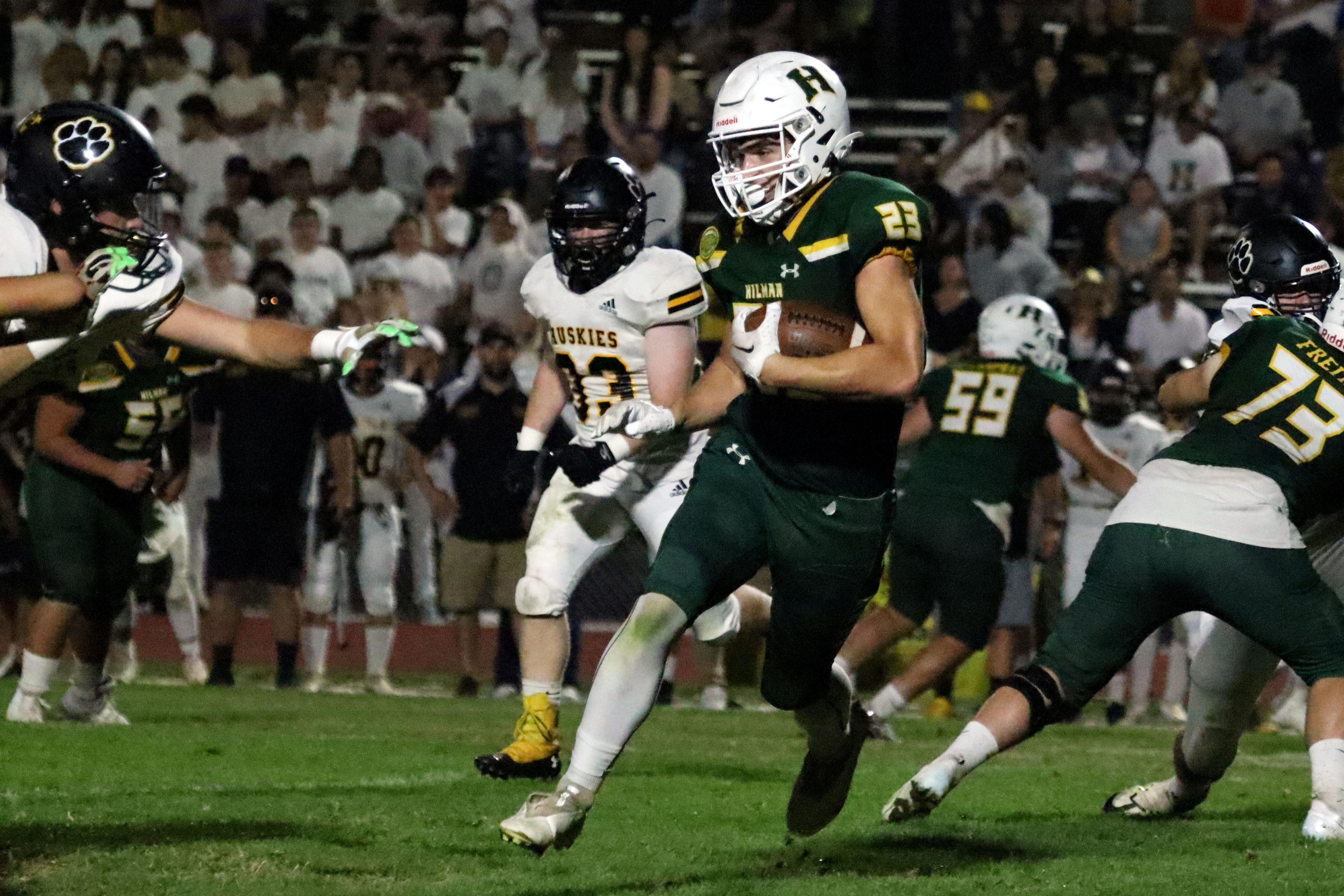 HUGHSON -- The Hughson Huskies and the Hilmar Yellowjackets were out to claim a piece of the Trans-Valley League title on Friday evening. The Yellowjacket’s sting was ultimately stronger than the Huskies' bite in a 49-26 victory.

Hughson’s Husky Memorial Stadium was packed with a standing room-only crowd on both sides of the field as the fog rolled in under the stadium lights. The fans were pumped, but the visiting Yellowjackets were focused.

Quarterback Caden Bailey returned from injury to rush for four touchdowns, each pivotal in dispatching Hughson, one of the season's best stories. The Huskies entered the game with TVL title aspirations. A win on Friday would have clinched the Huskies' first league title since 1998.

Instead, Hilmar, a resident TVL king and no stranger to "TVL title bouts," flexed its muscles ... and revved its engines. Now, the Yellowjackets -- not the Huskies -- sit in the driver's seat for the league championship. With two games remaining, Hilmar's magic number to clinch is 1.

“They were calm before the game, confident but calm. Sometimes, instead of trying to create excitement, we’re actually trying to calm them down. The hype is already there,” said Hilmar head coach Frank Marques.

The Yellowjackets used that calmness and took control after a series of Hughson blunders, including two fumbles. Just two minutes into the game and on its first possession, Bailey faked a pass and ran for a touchdown. The Huskies blocked Spencer Azevedo’s extra-point attempt.

Bailey struck again after 7 minutes of back-and-forth struggle between the two teams with a 4-yard rushing touchdown. A successful two-point conversion made it 14-0. The Huskies, meanwhile, were stuck in a rut. Offensively, Hughson didn't pass the 50-yard line in the first quarter.

Hughson’s Jacob Yarborough opened the second quarter with a beautiful punt back to the 16-yard line. Two minutes into the new quarter and after a series of passes to running back Luis Vargas, wide receiver Derek Taylor rushed for a 9-yard touchdown to widen the lead, 21-0.

Four minutes later, Hilmar’s Vargas charged 76 yards for another Hilmar touchdown. Hughson, still struggling to complete passes and move the ball, finally got on the board with just over two minutes remaining in the first half.

Quarterback Robert McDaniel connected with David Delgado to make it 28-7.

The Yellowjackets continued their dominance in the second half. Bailey rushed for 25 yards for his third touchdown. The Huskies refused to give up, a hallmark of their sensational season. The Huskies executed a series of 15 plays before McDaniel found Gavin Stone in the endzone.

Bailey answered with a near-immediate 73-yard quarterback-keeper touchdown to draw the third quarter to an end with Hilmar leading comfortably, 42-14.

Vargas, who rushed for a game-high 198 yards, said, “the game plan was just to do what we do … and keep going.”

Several Yellowjackets grabbed the ice bucket and headed for Marques, but he was quick on his feet and dodged the deluge.

“I’m not ready for that yet…we still have two more games,” he said.

Added Vargas: “From here on out we got to keep our heads high the next two weeks. We still gotta come out here and execute and play some ball.”

Hilmar still has to face Modesto Christian and Riverbank, but it only needs to win one of those match-ups to take at least a share of the Trans-Valley League championship for themselves.

Samantha Schmidt is a reporter and photographer with FrontRowPreps.com.