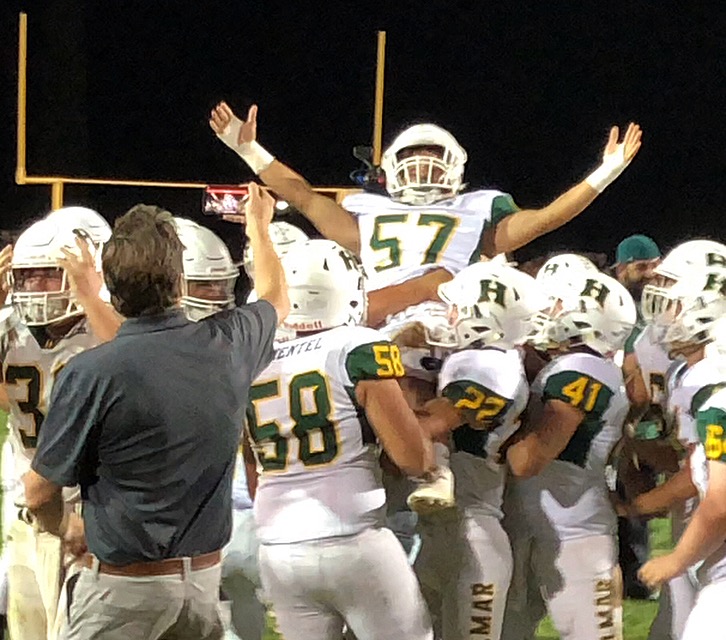 Hilmar backup kicker Miguel Padilla (57) is carried off the field on the shoulders of his teammates after booting a 33-yard field goal in overtime to beat Escalon 20-17 on Friday, Sept. 21, 2018. (James Burns)

'He's as cool as ice.' How a backup kicker etched his name in Hilmar-Escalon lore.

ESCALON — In the latest chapter of the Hilmar-Escalon football rivalry, backups became stars in the Yellowjackets’ thrilling 20-17 victory over the Cougars.

Backup kicker Miguel Padilla stroked the game-winning 33-yard field goal in overtime as fourth-ranked Hilmar completed a come-from-behind victory over No. 2 Escalon in yet another epic Trans-Valley League battle at Lloyd Engel Field.

“It lived up to the billing," Hilmar coach Frank Marques said. “We’ve had a lot of great games on this field. Nathan Costa’s senior year and the last-second score. Of course, last year’s game. I don’t know — this may top it.”

Escalon’s Guillermo Alvarez missed a 41-yard field goal attempt on the first possession of overtime, pulling his kick left of the uprights. Just moments earlier, Alvarez, one of the region's top soccer players, sent the game into overtime with a 36-yard boot as time expired.

With a chance to be a hero, Padilla, an undersized lineman with taped hands and a moppy haircut, calmly threaded his kick from the left hashmark between the posts, triggering a wild celebration.

“The only thing I was thinking about was the other team intimidating me. I was just brushing it off. I followed through with my kick and it went in,” said Padilla, who was thrust into the spotlight after Bryan Millan had to be helped off the field on the first play of overtime.

Millan,  a top-50 returning player largely because of his kicking prowess, left his feet for a pass in the end zone on first down and landed awkwardly out of bounds.

Fortunately for Hilmar, Marques’ preparation calls for worst-case scenarios. He had Padilla kick field goals throughout the week just in case a moment like this arose.

Padilla was carried off the field atop the shoulders of his teammates and fashioned with a thick chain necklace with an “H.”

Padilla wasn’t the only star.

Aiden Azevedo had four receptions for 40 yards in the second half, including three on the drive that produced the go-ahead touchdown with 4:23 left in regulation. A lanky and sure-handed target, Azevedo hauled in a 5-yard pass from Treven Crowley to make it 17-14 — the Yellowjackets’ first lead in nearly 36 minutes.

Crowley was inserted into the lineup just minutes before the game, usurping last week’s starter Ryan Teixeira, who threw two interceptions in a loss to Ripon.

With Isaac Sharp bottled up, Crowley was given the freedom to create. He was 9 of 16 for 161 yards and two touchdowns, including a 71-yard scoring strike to Sharpe alone in the seam on the second play of the game.

Just 50 seconds into this clash of top-10 programs, Hilmar had delivered a staggering first punch with its backup quarterback.

“We decided to give him a shot tonight and he was playing well so we stayed with him,” Marques said. “We’re blessed with two good quarterbacks and tonight was Crowley’s turn. He performed really well. We’ll evaluate as the year goes on and see what happens.”

Luke Anderson scored a pair of rushing touchdowns and the defense forced Hilmar to punt on four straight possessions before yielding a 22-yard field goal to Millan as the first half ended.

The Cougars led 14-10 going into the fourth quarter, but failed to capitalize on back-to-back red zone possessions to start the second half. Escalon turned the ball over on downs at the Hilmar 7 and later had a 42-yard field goal attempt blocked.

“Three red zone opportunities that we came away with zero points and that’s the ball game right there,” said Escalon’s first-year coach Andrew Beam. “Those ones come back to bite you.”

The road doesn’t get any easier for the Cougars, who travel to Modesto Christian next week. The Crusaders entered the week No. 3 in the small-school poll and will likely climb following a 37-0 victory at Hughson.

Hilmar has a bye and then jumps back into the grinder with Hughson on Oct. 5.

“We have a big road ahead of us," Marques exhaled, "but we're going to enjoy this one tonight. The kids played great and they responded. Good thing about tonight was there wasn't one hero. There were a lot of heroes."