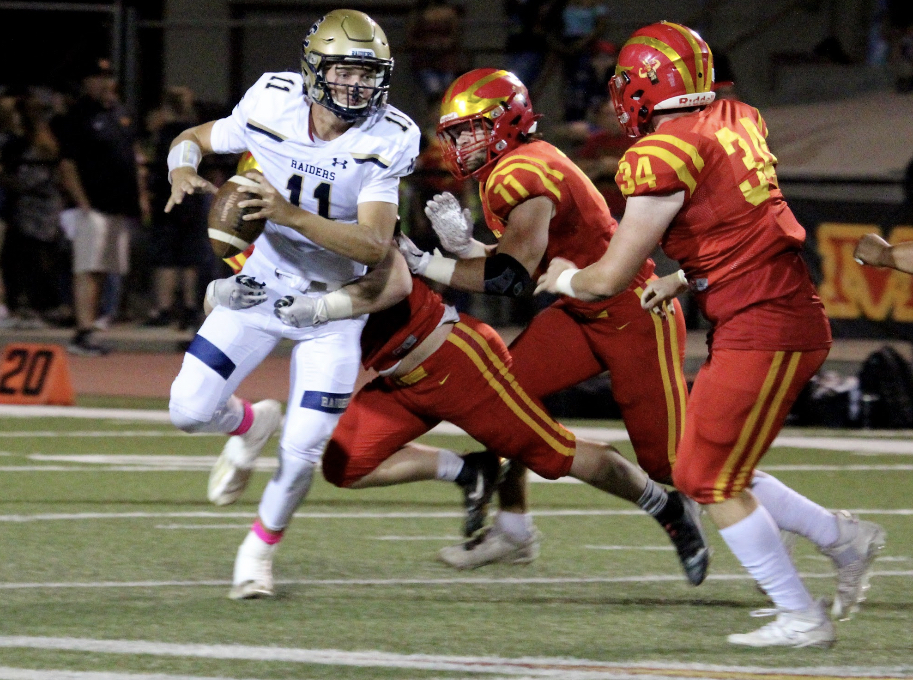 Tyler Paul Wentworth is one of the nation's top young baseball prospects, but the 6-foot-5 sophomore is quickly building a recruiting profile in football. (Samantha Schmidt)

'He's built for this': Elite HS quarterback may lack stats, but his DNA is unrivaled

MODESTO — Tyler Paul Wentworth’s card is filling quickly and there are no breaks in sight for one of the region’s most gifted athletes. He is a three-sport athlete in an era of specialization, and the Central Catholic sophomore is throwing open the doors of opportunity in each arena.

“In a time when everyone specializes … to be doing three sports, to me that is impressive and rare,” Central Catholic athletic director and defensive coordinator Billy Hylla said.

“Rare” best defines the Wentworths as a whole.

Tyler Paul's father, Kevin Wentworth, was a CIF Northern California and state champion golfer at Manteca High in 1985 and 1986, respectively, and played four years of basketball and three more in football. Kevin later left the central valley to golf at Oklahoma State, a longtime national power, and guided the Cowboys to an NCAA title, knocking off another lefty — Phil Michelson and Arizona State.

As a pro, Kevin won 10 tournaments and played three years on the PGA Tour.

“When you’re in that environment, when you’re around athletes in your own household, you see it when you’re a little kid. He’s got great parents and they’ve taught him well,” Central Catholic coach Roger Canepa said. “He’s built for this. He’s a competitor. This moment won’t be too big for him.”

The Raiders hope so.

Top-seeded Central Catholic (9-1) begins its pursuit of a Sac-Joaquin Section Division II banner on Friday against No. 9 Lodi (8-3), which stunned No. 8 Downey last week with a tricky triple-option offense and a cagey quarterback, Adam Schallberger.

"They controlled the tempo of the game,” Canepa said. “They're playing to win. They're playing with house money. They held the ball for 10 minutes, and then went with the onside kick and held it, and then got a turnover. That's how you win games. They kept the ball away from Downey. They slowed the game down to a crawl.

“They played hard and did what they had to do. The coach (knew he was) a ninth seed and rolled the dice. I’ve got to give Lodi credit. Downey had a great team, but they sat them on the sideline for the whole first quarter.”

Friday's kickoff is set for 7 o’clock at David Patton Field.

At the controls will be a 6-foot-5 sophomore with a sweater full of varsity letters. A year ago, Tyler Paul Wentworth arrived at Central Catholic a ready-made star, carving his niche on the Raiders’ varsity football, basketball and baseball teams.

With his big frame, strong arm and champion’s DNA, Wentworth’s future will likely be on the diamond. There, he is a coveted outfielder and pitcher, holding offers from Stanford, UCLA, Oregon and Arizona, among others. Wentworth is ranked No. 5 nationally in the Class of 2024, according to the PrepBaseballReport.com: “... A primary outfielder, he’s fluid and athletic on the grass where his footwork, powerful arm stand out as much as his size.”

“At the end of the day, the sport I love the most is one I’m playing at the time,” Wentworth said, but “I really like playing baseball, because it’s unique. … I’m constantly in a one-on-one battle with the pitcher. How will I outsmart and out-think him, and vice versa when I’m pitching?”

Still, Canepa isn’t so certain his college commitment — still years down the road — will be so cut and dry.

In a few months, Canepa believes Wentworth may have just as many football suitors. LSU is among those that have begun courting the tall left-hander.

“For his age, he’s so mature. Tyler is a competitor. I don’t worry about Tyler. He’s like having a senior quarterback. He does all the little things well. He’s pretty mature for his age," Canepa said. "I’ll be honest, I think he’s the best QB in the area. I have all the faith in the world in him. He’s as good as there is. He controls the game. He can get out of trouble. He can run and he’s got a big arm.”

His numbers are modest, especially when stacked next to the region’s other heralded quarterbacks. Statistically, two of the state’s best reside in the Valley Oak League. Kimball’s Nicholas Coronado is fifth in the nation in yards (3,682) and sixth in touchdowns (48). East Union’s Luke Weaver has thrown for 2,991 yards, the 11th-best in the state. Downey’s Conner Stoddard is tied for 24th in the state with 31 touchdown passes. Waterford’s Aaron Adams has 25 more touchdowns than interceptions, one of the best ratios in the section.

However, with the strongest run game in the region, the Raiders haven’t needed their sophomore signal-caller to carry the load. Wentworth is averaging about 10 passes per game. He has completed four passes in each of the last three games, all victories to shore up a Valley Oak League title. Wentworth has completed 56 of 108 passes for 1,032 yards. He has eight touchdowns against three interceptions.

While his statistics may not jump off the page, his poise does. Don't forget: Wentworth is a sophomore steering the No. 1 team in all the region and section Division II. The mental fortitude to survive the week-in, week-out challenge of the Raiders' schedule was inherited from the his father.

“(He’s) totally influenced me in so many ways,” the younger Wentworth said. “He obviously played professional golf, when you’re playing golf everything is on you. Eighteenth hole, 150 yards in … how do you hit that shot? He taught me some of the mental things: Just do your job. Know your job and do it well. Don’t let the lights or the fans get into your head.”

Central Catholic is the region’s most decorated program with a section-best 19 banners and four CIF State Bowl victories. However, it’s been nearly seven years since the Raiders finished in the section spotlight.

In Tyler Paul, they trust, largely because winning is coded into his DNA.

“He’s about winning,” Canepa said. “We have kids that don’t want to come here for whatever reason, maybe because we don't throw the ball 30 times. I tell them all we want to do is win.

“The key to winning championships is to do what you have to do at that time to win and not be selfish. Our team is good about not being selfish. You have a group of players that just want to win. It's not about stats. That's how we've won in the past.”