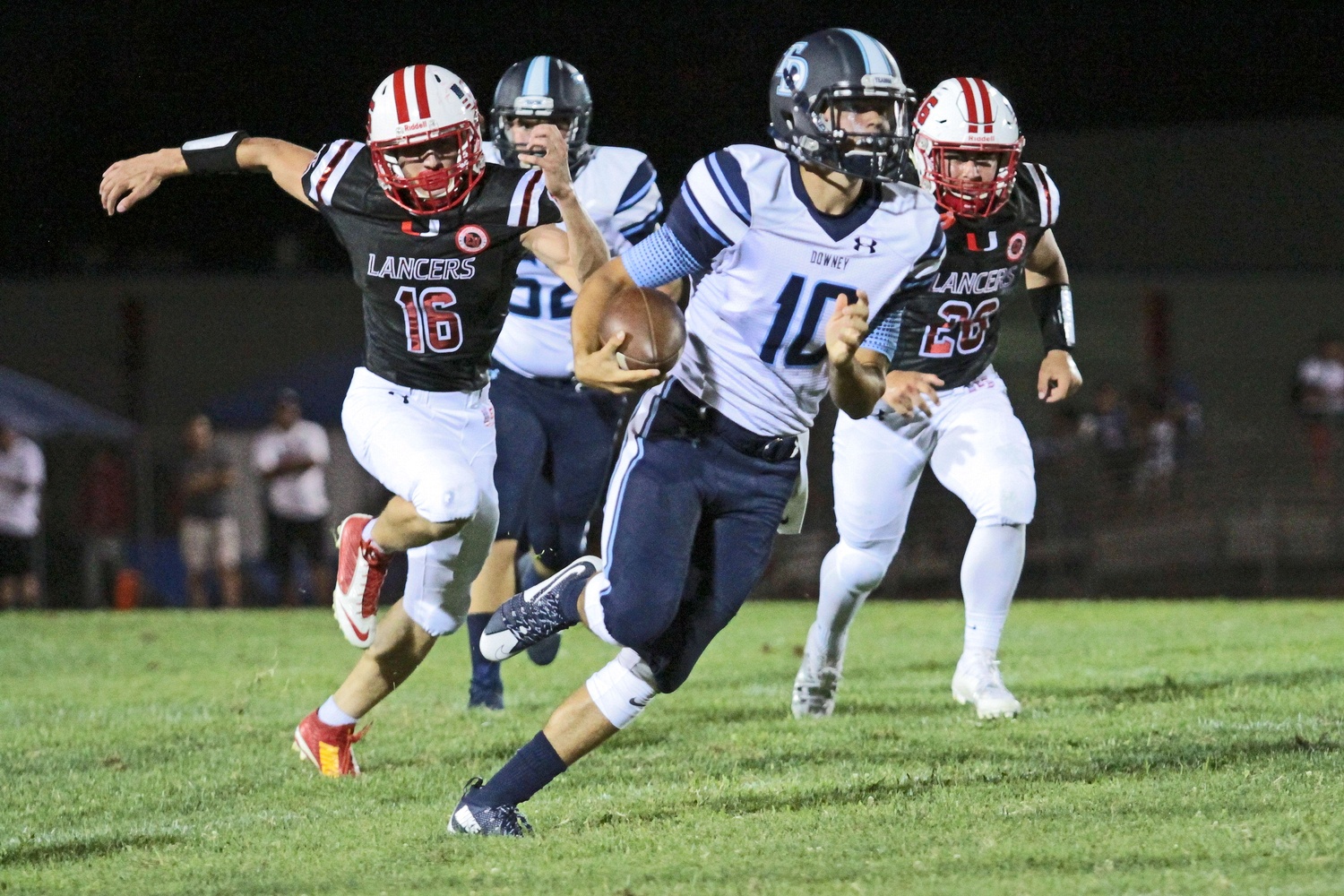 Downey quarterback Bryce Gouker scrambles away from the East Union defense during a 49-30 victory on Aug. 23, 2019 at Dino Cunial Field in Manteca. (Daniel Harris)

MANTECA – They’ll be no issues at quarterback this season at Downey High. Senior Bryce Gouker is the man.

Gouker keynoted the 2019 season Friday night with a major statement, leading the Knights to touchdowns on their first four possessions. He finished with five touchdown passes  and two conversion tosses for 302 passing yards, more than enough in Downey’s 49-30 victory over East Union at Dino Cunial Field.

“Tonight’s game went pretty good, but still a lot to fix,”said Gouker, who orchestrated Downey’s potent offense without a turnover. “There were a lot of good things and also some bad things.”

Last year, Gouker and Beau Green operated at QB, but they’ll be no sharing this season as long as Gouker stays upright. He made every requisite throw in the Knights’ potent typically high-powered attack – hitches, slants and deep passes, almost all of them on target.

The game’s tempo was set on the first series. An inadvertent whistle cost East Union a touchdown,and the replayed down resulted in an interception by the Knights’  Cody Love.  Minutes later, Gouker tossed four yards to Bronson England for the early lead.  From that point, the Knights led while the Lancers chased.

Downey also features a dangerous new target in 6-foot-2 receiver Joseph Easterwood (nine catches,147 yards, two touchdowns, one conversion). He ripped down the East Union sideline on a 57-yard pass-catch for a TD and a 28-8 Downey lead early in the second quarter.

“We’re a little of a Jekyll and Hyde-type team,” Downey coach Jeremy Plaa said. “We came out on fire…then we gave up a couple of plays.The defense played so well for so long. They didn’t deserve to give up 30 points. They played better than that.”

“The best type of game is when you get a win and you can still go back and work on things you messed up,” said Plaa, who already looked ahead toward next week’s rematch against Manteca (Downey prevailed a year ago). “We can’t make the same mistakes against them and expect to win.”