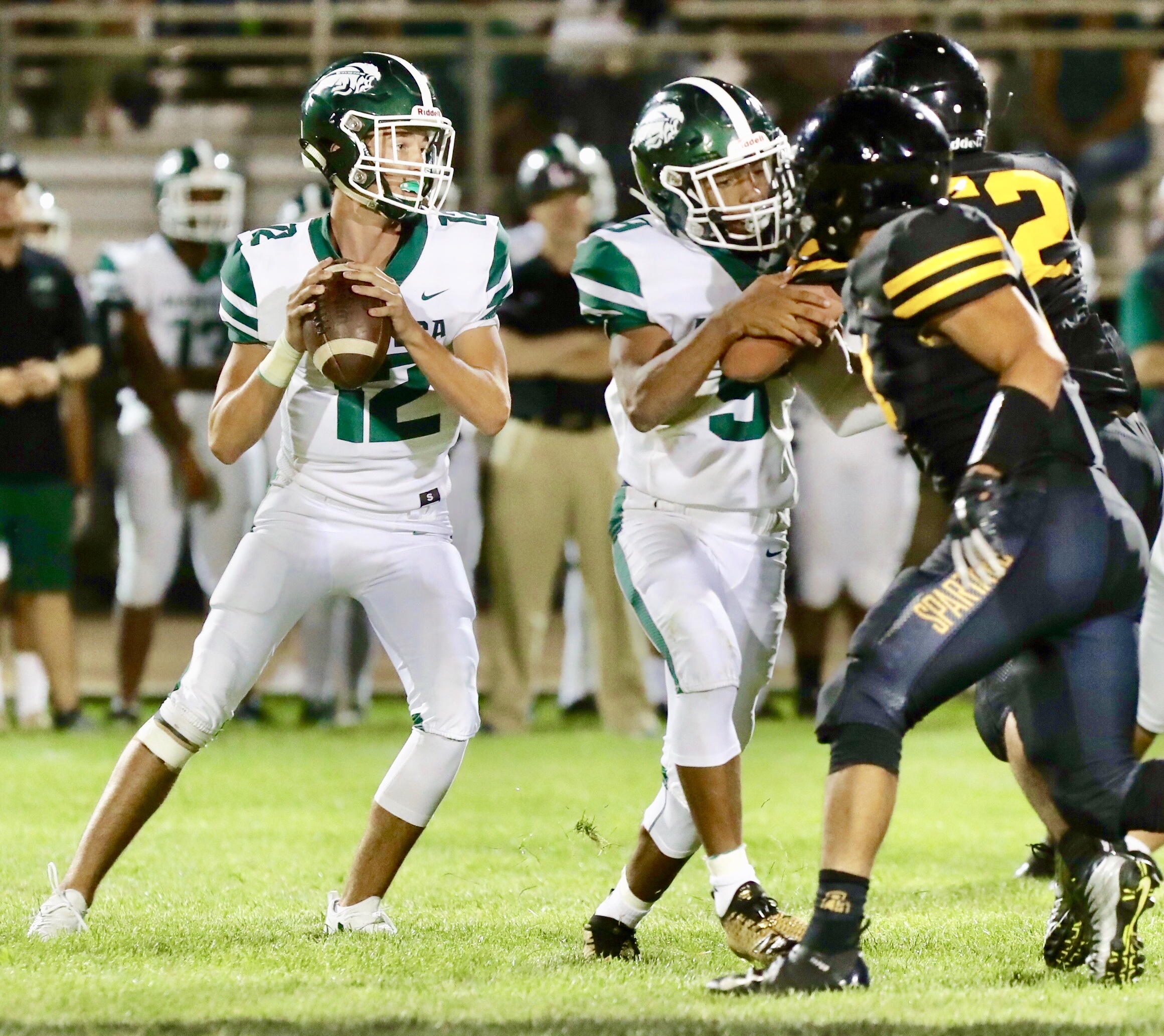 Manteca junior quarterback Ryan Ward, shown here against Granado of Livermore, threw for a career-high 332 yards and four touchdowns in a 35-28 loss to Central Catholic on Sept. 14, 2018. (Wayne Thallander)

MANTECA — The oldest campus in town has built a football powerhouse on the pillars of a smashmouth run game.

Times they are a-changing, though.

First-year coach and former offensive coordinator Mark Varnum has livened up the playbook, introducing spread concepts and trusting his quarterbacks to win games with their arms.

Today, the reins are manned by another strong arm — junior Ryan Ward, a highly-touted pitching prospect. Ward holds baseball offers from Baylor University and the University of the Pacific, but for now, his days are consumed by football.

Ward understands the comparisons to Campiotti, now a freshman at Northern Arizona University, are inevitable, but he’s doing his best to play outside the shadow of the program’s all-time leading passer.

“This is Gino’s sport,” Ward said, “but I try to do my own thing and be the best I can be at this sport.”

Ward earned the American Chevrolet Athlete of the Week and Panelli Passing Academy Top Gun awards after a career night in a 35-28 loss to top-ranked Central Catholic on Friday, Sept. 14. He threw for 332 yards and four touchdowns, picking apart the Raiders’ secondary with surgical precision.

He’s the first player to earn both honors in the same week. The American Chevrolet Athlete of the Week award is determined by a fan vote. Over a 24-hour period, more than 94,000 people voted in the large-school poll, with Ward receiving 51 percent.

He credited Varnum’s genius for his success on Friday. The Buffaloes attacked the Raiders’ depleted secondary, unleashing the deepest wide receiving corps in the Valley Oak League. Jorge Cedano (120 yards on 11 catches) and Jacob DeJesus (160 yards on nine catches) each had more than 100 yards and two touchdowns.

“We work on chemistry — that’s the main thing with the receivers — from January all the way until now with Jorge, Jacob and Kyle Lynch,” Ward said. “I think we found it in the Central Catholic game, and I can’t wait to see what happens in the rest of league.”

The loss was Manteca’s third in the last four games, but Ward believes the reigning Division III section champions are better equipped for the challenges that lie ahead, including a Sept. 28 showdown with Oakdale.

The Buffaloes stunned the Mustangs in the D-III final.

“We found ourselves as a team,” Ward said. “Going against this Central Catholic team, we knew they were going to be a tough team. We were down the whole game, but we (fought) until the last second. This is the game we’ve been preparing for since January. Central has a very good team and we know the VOL is a very tough conference … It was a tough week. We prepared for it like crazy and did the best we could do.”