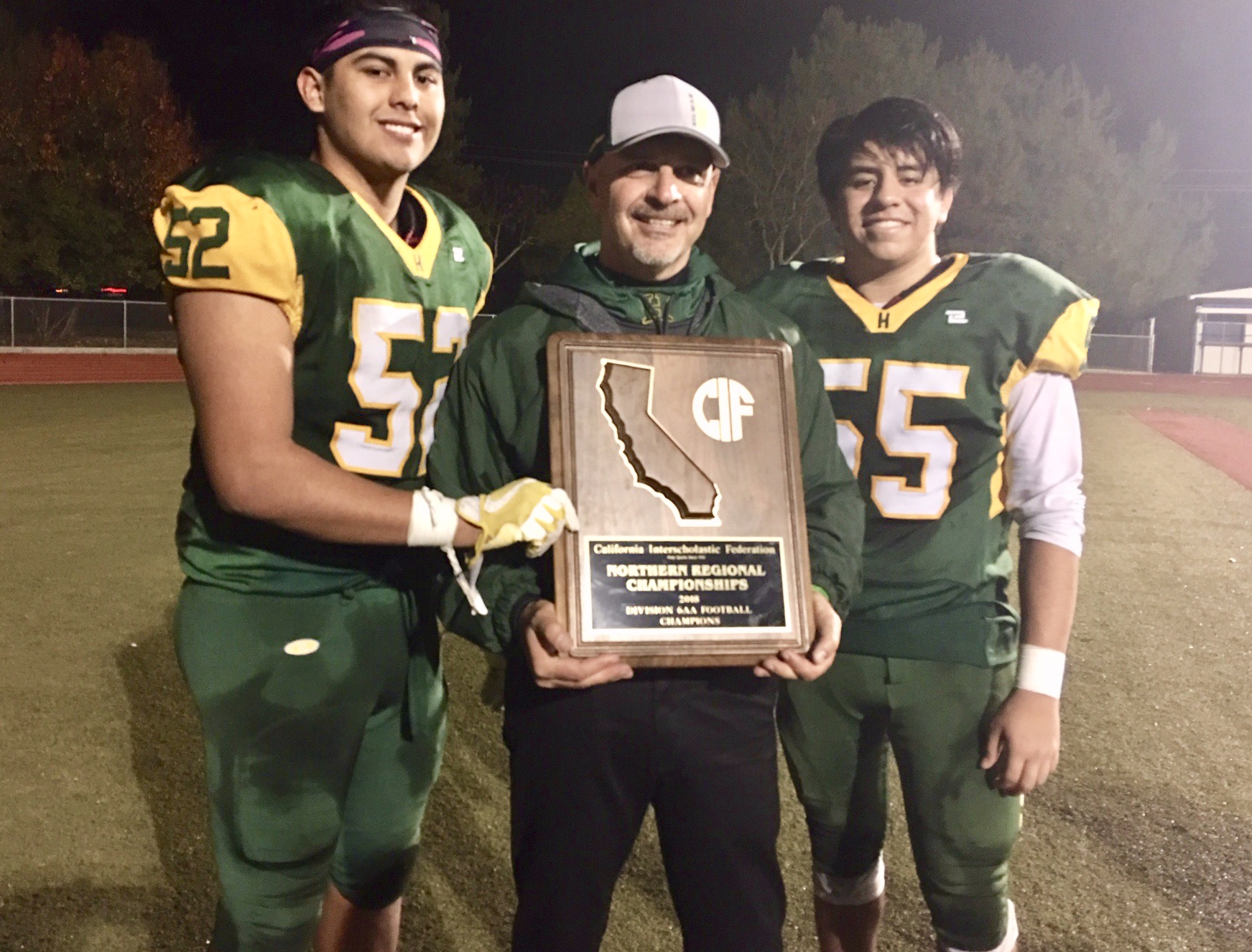 ATWATER — Hilmar High lineman-linebacker Nick Aguilera clutched the Northern California title plaque with both hands and screamed with joy. His teammates huddled around him in a team photo surely headed for the Yellowjackets’ archives.

“I held it like it was a baby,” Aguilera said. “To accomplish something like this…anything is possible.”

Hilmar (12-2) turned all five East Nicolaus turnovers into touchdowns, four of them before the first quarter was history. Quarterback Treven Crowley passed for five touchdowns, one of them to brother Trent, as the Yellowjackets checked one of two big boxes on their to-do list.

The second box, you ask?  For all of Hilmar’s success over the years, it’s never reached a state final. The Yellowjackets will get their chance when they return to Falcon Field next Saturday night for a bit of unfinished business against Strathmore, a 53-52 double-overtime winner over Hilmar in last year’s regionals.

Which is why Hilmar coach Frank Marques held his thumb and index finger barely apart and told his team, “You’re this close to a state championship.”

The Yellowjackets aren’t stressing about the six points which separate them from 14-0 perfection. By now, they’re a downhill rolling boulder gaining speed with each victory. Neither Ripon Christian nor East Nicolaus, Hilmar’s last two victims, had lost before they were flattened by the momentum-filled team in green.

East Nicolaus (13-1), a tradition-steeped program much like Hilmar, was betrayed by title-game nerves. Hilmar’s David Moreno pounced on a bobbled exchange on the game’s first snap, and Justin Rentfro took a swing pass from Crowley on the next play and stepped 15 yards into the end zone.

Moments later after the Spartans’ next lost fumble, Bryan Millan raced 32 yards around the right side for Hilmar’s second TD. A botched East Nicolaus pitch again opened the door, and Hilmar shut it on  Crowley’s 14-yard hitch to Noah Barcelos, who juked a defender and finished the 14-yard play.

Less than four minutes into the game, Hilmar dictated all terms 20-0.

“I thought it would be tougher, a dogfight,” Aguilera said. “I expected something like a Hilmar-Escalon game.”

East Nicolaus clearly was out of its comfort zone. Before Friday night, the Spartans had not played on artificial turf and had won all its games by at least 19 points.

“We didn’t have five turnovers all season,” East Nic coach Travis Barker said. “Hilmar is a better team than us. We would have had to play perfect. They just had more athletes and more weapons than us.”

Hilmar’s pull-away continued on Crowley’s well-thrown 52-yard scoring strike to Millan late in the first quarter. The play turned into Hilmar’s only deflating moment. Millan, one of Hilmar’s two-way threats, rolled his ankle as he was tackled on the goal line. He was sidelined the rest of the night, and Marques said X-rays will be taken.

The Hilmar defense focused on East Nic quarterback Gavin McAuliff, who had rushed for more than 1,000 yards this season. He gained only 75 yards on 14 carries and teammate J.T. Stinson — another 1,000-yard rusher — managed 43 yards and a third-quarter TD.

A fumble recovery by Brennan Mason led to a Hilmar dagger late in the half—Crowley’s 6-yard TD pass to Aiden Azevedo. It was 34-0 at the break, an early exhale for the Yellowjackets.

Rentfro and Sharp can thank an offensive line which Marques said is the best in his 16-year run as coach. Center Jarred Collier, guards Frank Pereira and Jacob Diaz and tackles Aguilera and Efrain Duenas (Collier and Aguilera are three-year starters) anchor Hilmar’s strength.

“If my line didn’t block like they do, I wouldn’t have thrown five (touchdowns),” Crowley said.

As Marques said, Hilmar has not forgotten last year’s heartbreak against Strathmore.

One box checked. One still unchecked.