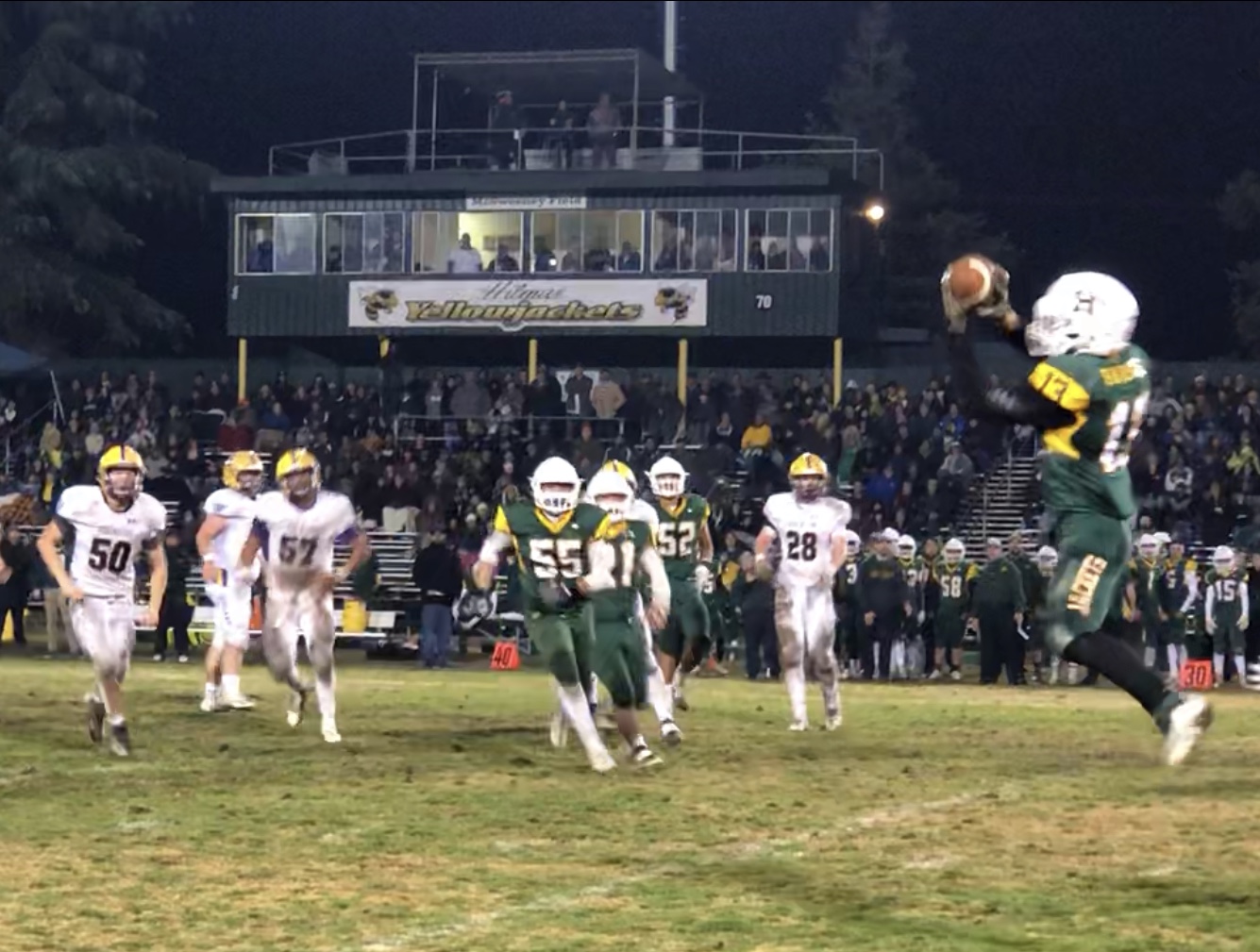 Hilmar sophomore safety Cole Bailey picks off a pass in the fourth quarter, giving his team a possession that led to a Justin Rentfro touchdown run in a 28-18 win over Escalon in the Sac-Joaquin Section Division VI semfinal in Hilmar, Cali., on Friday, Nov. 23, 2018.

For the second consecutive season, Hilmar High held off Escalon and earned a trip to the CIF Sac-Joaquin Section Division VI championship game.

Hilmar's run defense shut down Escalon's three-headed monster of Kaden Christensen, Colton Panero and Luke Anderson -- all of whom entered the game with more than 700 rushing yards this season -- and held the Cougars to 53 yards on the ground. That forced sophomore quarterback Ty Harris, in for the injured Lucciano Dutra, to shoulder more of the load than the game plan called for. Harris thew the ball 33 times, completing 13 for 198 yards, one touchdown and one interception.

"One thing about the long delay, our defense was able to rep over and over," said Hilmar coach Frank Marques, referring to the playoff games that were postposned a week due to the poor air quality caused by the Camp fire in Northern California. "We thought they did some things out of certain formations. We just repped those over and over and our defense really responded. They were really up for the task."

If Hilmar's defense was up to the task, the opposite was true of its offense early in the game.  The Yellowjackets went three-and-out on their first possession of the contest and a botched snap on thepunt attempt resulted in a 29-yard loss and gave Escalon the ball on Hilmar's 1-yard line. Two plays later, the Cougars took a 7-0 lead when Anderson plunged into the end zone.

In the first half, Hilmar had two botched snaps on punts, another blown snap between the center and quarterback that resulted in a 21-yard loss.

"Our defense kept us in the game long enough for us to rebound," said Hilmar coach Frank Marques, who will be seeking his fourth Sac-Joaquin Section banner next week against RC. "This win does a lot of credit to our defense."

Escalon took that 7-0 lead into the locker room at halftime and it lasted about 15 seconds into the second half when Isaac Sharp returned the kickoff to start the third quarter 87 yards for a score.

"As soon as I got to the ouside, I saw a hole," said Sharp. "I was super surprised, I ran through it. I mean, there was great blocking on it, it was a great job by everyone and I ended up scoring. It was great."

The sudden turn of events seemed to momentarily stun the Cougars, who went three-and-out on their first possession of the second half and then saw Hilmar take a 14-7 lead on a 45-yard pass from Treven Crown to Bryan Millan with 1:55 elapsed in the third quarter. Escalon cut into the margin when Guillermo Alvarez booted a 36-yard field goal, making the score 14-10.

Hilmar seemingly put the game away with 5:20 remaining when sophomore safety Cole Bailey picked off a Harris pass and returned near midfield, which led to Justin Rentfro's 17-yard TD scamper to make it 21-10 with 4:59 to play. But the Cougars countered wtih a 14-yard scoring strike from Harris to Panero, and with the two-point conversion pass from Harris to Christensen, the Cougars were within a field at 21-18 with 3:35 to play.

Hilmar faced a third-and-14 with just over two minutes to play in the game, but Sharp busted lose for 15 to move the chains and set the stage for Rentfro's second TD of the contest, this one a 32-yard backbreaker that made it 28-18 with 1:56 to play.

Escalon marched inside Hilmar's 10 with under a minute remaining, but a sack and fumble put the game on ice.