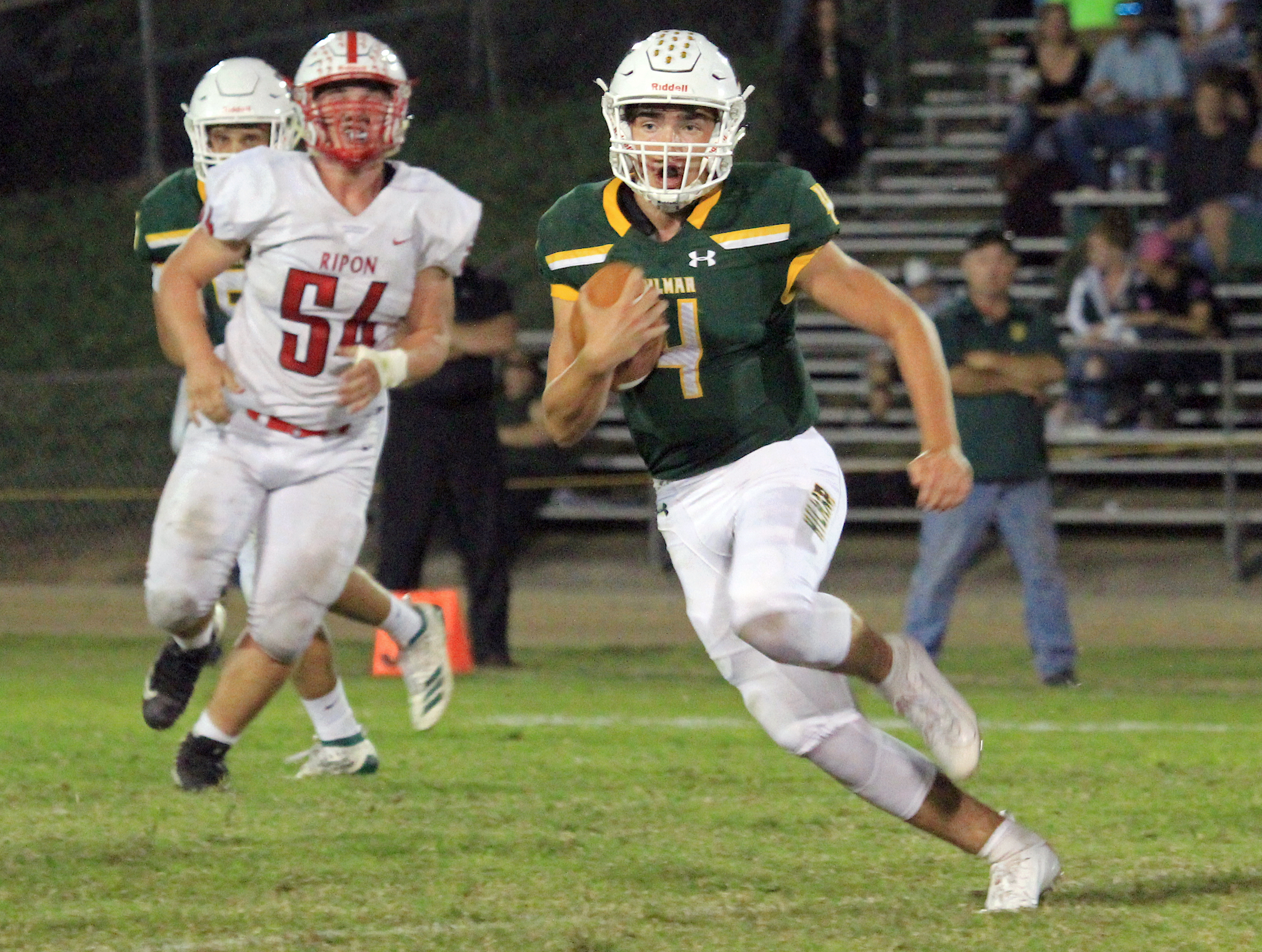 Hilmar quarterback Seth Miguel rushed for two touchdowns and threw for two more in a 38-27 victory over Ripon on Sept. 20, 2019, at McSweeney Field in Hilmar. (Samantha Schmidt)

HILMAR — Seth Miguel isn’t looking over his shoulder or too far into the future.

Instead, the junior is content to keep his focus fixed on his day-to-day responsibilities as Hilmar High’s next young quarterback: Playbook, film, practices, game, repeat.

Miguel, a dual-threat athlete seemingly built for the Yellowjackets’ Spread offense, has become a creature of habit in his first varsity season. He has cut through the pressure of replacing an All-State talent like Treven Crowley and inheriting a state championship football team by simplifying his job description.

“Do the little things,” he said, “and the big things will come.”

The “big things” arrived with a bang on Friday evening as third-ranked Hilmar (5-0, 1-0) opened the Trans-Valley League season with a resounding win over its reigning king. Miguel accounted for four touchdowns — and played a key role in a fifth — in a 38-27 victory over No. 2 Ripon.

The Indians (4-1, 0-1) dominated the series before Friday’s loss, winning four of the previous five meetings, and it looked as though Ripon might be on its way to another victory when Grant Wiebe plowed in from the 11 to make it 7-0 with 8:39 left in the first quarter. But injuries to key players, including Wiebe, quickly changed the narrative for the two-time defending TVL champions.

Wiebe, one of the top defenders in the region, was knocked out of the game  in the first quarter with an apparent arm injury. He was soon joined by quarterback Nico Ilardi, also the team’s punter and a defensive back, who hobbled to the trainer’s table with a right leg injury.

Brandon Rainer, another two-way starter, replaced Ilardi under center for a series, but was also knocked out of the game by the Yellowjackets’ hard-hitting defense.

Missing three of its stars, Ripon simply couldn’t keep pace with Hilmar, which showcased its big-play offense and a rising talent under center.

“It’s really sad to have those guys go down. It changed the tempo of the game 100 percent,” said Miguel, who accounted for nearly 200 yards of total offense. “You felt a downshift in their defense and offense. We just kept playing how we play and didn’t let our foot off the gas.”

Miguel found Justin Barros behind the secondary for a 51-yard touchdown pass to tie the game at 7-7. After Ripon fumbled the ensuing kickoff, Miguel Padilla inched a 43-yard field goal over the uprights to give Hilmar a 10-7 lead.

Dorian Dougherty responded with the first of his two touchdown receptions, but Steven Silva gave Hilmar the lead for good with a 62-yard sprint late in the first quarter. Miguel played a pivotal role on that play, too — a run-pass option. Instead of pulling the ball, he read the defense crashing down on him and pressed the ball into Silva’s clutch.

Silva finished with 101 yards on 13 carries.

“Seth has done a great job for us. He’s worked hard. He’s still making a couple of mistakes on his reads, but it’s coming,” Hilmar coach Frank Marques said. “This is only his fifth varsity start. He learned a lot tonight  and he’s going to learn a lot next week. The big ‘E’ is around the corner.”

Miguel delivered a performance that was Crowley-esque. He was 7 of 12 for 113 yards and touchdown passes to Aidan Azevedo and Barros. He also rushed for two scores, finishing with 77 yards on eight carries.

His transition to the varsity level has been aided by the support of his teammates -- and the former starter.

Crowley, an All-State baseball player, watched Friday’s victory from the sideline. The senior chose not to play after securing a Division I baseball scholarship in the offseason.

“I’m really proud of our team,” Marques said. “I think we grew up a lot tonight. We have a lot of young guys and I thought we played well.”

With the win, Hilmar will move up to No. 2 in the small-school poll, which sets up another heavyweight battle in the TVL. It will be one-versus-two when top-ranked Escalon (4-0) visits McSweeney Field next Friday. Hilmar swept the Cougars last season en route to Sac-Joaquin Section and CIF State Bowl titles.

“I love Escalon,” Marques said. “I feel like Escalon makes the world right."