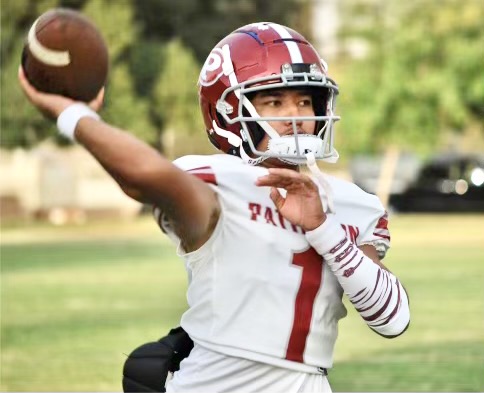 Senior Jacob Guevarra is one of the region's top dual-threat quarterbacks, but it's his acumen that has benefitted Patterson the most. The Tigers fly into the Division III playoffs on an eight-game winning streak.

PATTERSON — Many lament the losses associated with the shortened COVID-19 season, when high school football was played in the spring and schedules were trimmed down to five contacts.

The abbreviated season served as an audition for Guevarra, then a junior, who wowed coach Rob Cozart and his coaching staff in limited duty.

Thrust into a starting role when three-year starter Logan McCleery was suspended one game for an ejection, Guevarra dazzled in a 49-8 rout of Pacheco. He completed 11 of 15 for 279 yards and three touchdowns, and he showed speed Cozart didn't know he possessed. Guevarra rushed for 83 yards on six carries, including a touchdown.

"He'll get you with his legs at the most random time, when you don't expect it," Cozart said. "I didn't think he was as fast. He's not the biggest kid, either. This kid took a QB option and scooted down the sideline and was gone. He's surprisingly quick, super athletic and a great leader."

His leadership, coupled with Patterson's size and athleticism, have the Tigers rolling into the Sac-Joaquin Section postseason. Patterson is seeded No. 5 in the Division III playoffs and will host No. 12 Burbank on Friday. It's a loaded bracket, to be sure:

— Oakdale is the No. 1 seed and receives a bye. The Mustangs earned the top slot after shutting out Valley Oak League rival Manteca in their regular-season finale. Oakdale will play the winner of No. 8 Davis-No. 9 Roseville on Nov. 12. Davis, the Western Athletic Conference champion, is the region's only unbeaten team and flying high after clinching its first league title in 20 years.

— Once the division and the region's top-ranked team, Manteca dropped to No. 3 after three consecutive losses, all to No. 1 seeds (Central Catholic, Division II, and Kimball, Division IV). The Buffaloes, who limped across the finish without stars Blake Nichelson and Lyon Colon, did enough to earn a much-needed bye. They'll play the winner of No. 11 Golden Valley-No. 6 Sacramento.

The Tigers are among the hottest teams in the section, winners of eight straight and the CCC championship. They're also among the most rested — and critics might say, untested too.

Over the last five weeks, Patterson has whipped four CCC opponents — Atwater, Golden Valley, Central Valley and Buhach Colony — finishing each of those conference games with their second and third wave of substitutes on the field. The Tigers used a 23-0 kick in the fourth quarter to finish Buhach Colony. In Week 10, the final Friday of the regular season, Patterson savored its bye.

The Tigers' last true test came during a 48-39 victory over Merced on Sept. 24 at Patterson Community Stadium. Once again, Guevarra wowed Cozart and the coaching. This time it was his leadership that took centerstage. Guevarra set season-highs for completions (17), attempts (24), yards (288) and TD passes (three).

"Tremendous leadership in that one," Cozart said. "Jacob controlled the offense and really led the way. It was what you wanted from your quarterback in a CCC championship-type of game. It was a playoff atmosphere. He saw that as his time and he definitely took advantage of it."

For the season, Guevarra has thrown for 1,402 yards and 24 touchdowns against just two interceptions. He's also rushed for 499 yards and 10 touchdowns.

The Tigers have improved as Guevarra has found his rhythm under center. His worst QB ratings have come in Patterson's two losses: a 74.8 rating in a 27-20 loss to small-school giant Hilmar in their season opener; and a 90.5 rating in a blowout loss to Manteca, then the top-ranked large-school team in the region.

Cozart said his team's confidence wasn't shaken by an 0-2 start. The shortened COVID-19 season gave Cozart a glimpse into who they could become. He knew his Tigers had championship mettle and big-time talent, especially with the additions of defensive end TJ Levu, two-way lineman Marcus Simien, and wide receiver/cornerback Jaydrian Lawson.

"We put them on the schedule for a reason," Cozart said of Hilmar and Manteca, both playoff teams. "It would make us better. Neither team cycles; they're always good. We knew the way our schedule was built would ultimately help out in the CCC and the playoffs. Once we got back on the winning track, they realized that everyone they went up against wasn't Manteca or Hilmar. (The confidence) built toward the Merced game."