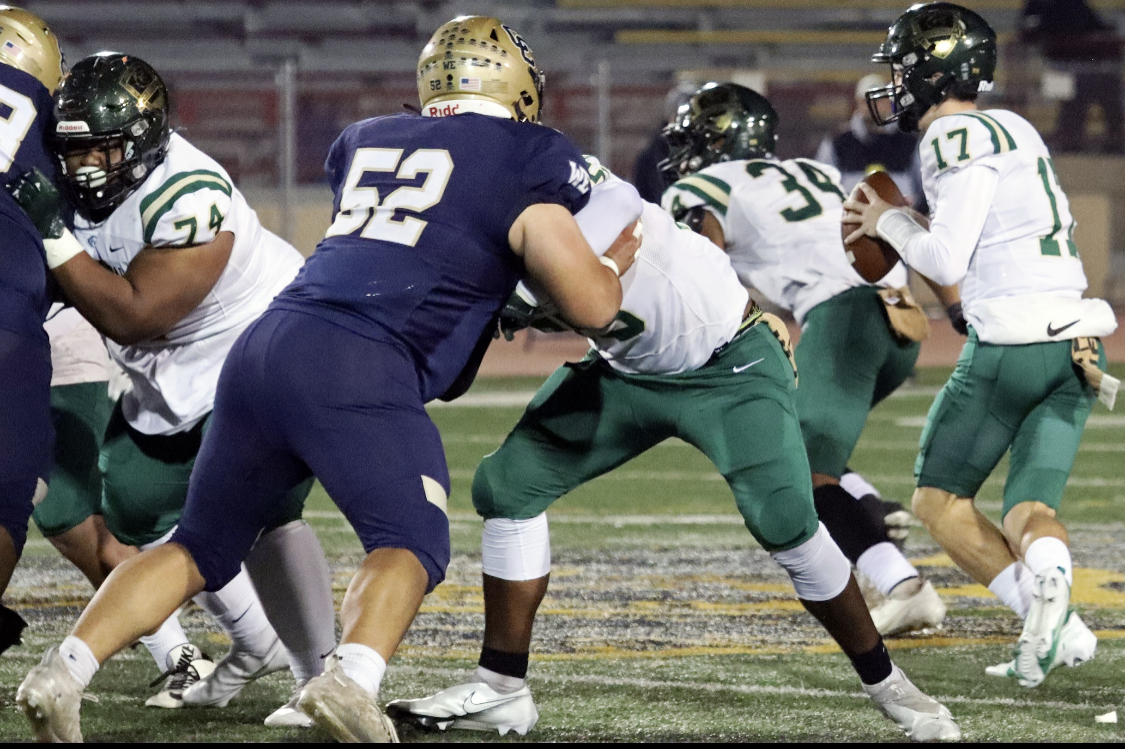 Central Catholic's defensive line is led by Jericho Machado (52), a four-year standout who leads the position group with 54 tackles and 6.5 sacks. (Samantha Schmidt)

The Central Catholic football team has stared down some of the best from the Bay Area, Sacramento and Stockton in its return to the state stage.

The Raiders' next challenger comes from the south.

On Friday, Central Catholic (12-1), the Sac-Joaquin Section Division II champion, hosts Bullard of Fresno (9-4), the Central Section Division II champion, for the right to represent Northern California in the CIF State Division 2-AA Bowl. One of the key matchups to watch is the battle in the backfield: Bullard's highly-touted quarterback versus Central Catholic's defensive line, an unheralded bunch that has played well in recent wins against Antelope and Monterey Trail.

Bullard is led by a record-setting quarterback, Roland Russo, who is as dangerous on the run as he is standing in the pocket. Russo has thrown for a school record 3,183 yards and is the only player in school history to run, catch and throw for a touchdown in a single game. He saved that feat for the Knights' 45-21 victory over Bakersfield in the Division II section final.

Russo is accustomed to splashy performances. The 5-foot-11 senior tossed a season-high seven touchdowns in a semifinal win over Kingsburg. He has 33 touchdowns on the season against just eight interceptions. In fact, he hasn't thrown a pick since before Halloween.

Head coach Roger Canepa is impressed, to be sure, but he isn't stumped by Bullard's passing game. Central Catholic has faced a bevy of spread-powered teams, including Valley Oak League foes Kimball and East Union. Like Bullard, Kimball, the top seed in the Division IV section playoffs, has its own record-setting quarterback — Nicholas Coronado, who ranked among the nation's leaders in yards and touchdowns.

"We've seen some people like them," Canepa said. "You have to be able to contain the quarterback and cover the pass. That's what spread teams want to do; they want to put you in binds. You have to run one, run some man, and switch it up on them, and you have to hit the quarterback."

Central Catholic will give Bullard several different looks up front. Though the injury to two-way starter Ayden Halvorson (leg) hurts, Canepa, like so many coaches, subscribes to the "next man up" philosophy.

The Raiders will apply pressure up front with a carousel of menacing defenders. Jericho Machado is a four-year varsity standout who leads the defensive line with 54 tackles and 6.5 sacks. Roman Foumai garners a lot of attention in the middle. Foumai is a big-bodied 400-pound nightmare with 23 tackles.

Jacob Edmond casts a long shadow at 6-6 and 355 pounds, while Mario Zavala ranges well with his 6-4, 230-pound frame. Savala has 43 tackles. Romeo Eteaki has 45 tackles and 2.5 sacks. Anthony Jimenez and Bryce Wilkinson also rotate along the defensive line.

"He was an energy guy," Canepa said Halvorson, "but we've found a way to deal with it. We've got a group of D-linemen that can rush the quarterback, so that helps."

Russo has help of his own.

Two-way talent Jaylen Davis has 34 receptions for 759 yards and a team-high 12 touchdowns. He also leads the Knights with six interceptions and three forced fumbles, and ranks second with 68 tackles. The 6-1, 170-pound Davis has committed to Fresno State, despite holding offers from three other universities.

Russo's top target is Jalyn Utendahl, who has 76 catches for 1,045 yards and five touchdowns. Daizon Allen also has 50 catches for 574 yards and nine TDs.

"Their wide receivers are good, but the kid from St. Mary's (UCLA commit Jadyn Marshall) is the fastest kid playing football. We've seen some dudes," Canepa said. "They haven't seen anybody like us. Not many teams run our offense.

"And then when you get the ball, you have to score. We've done a good job of that."