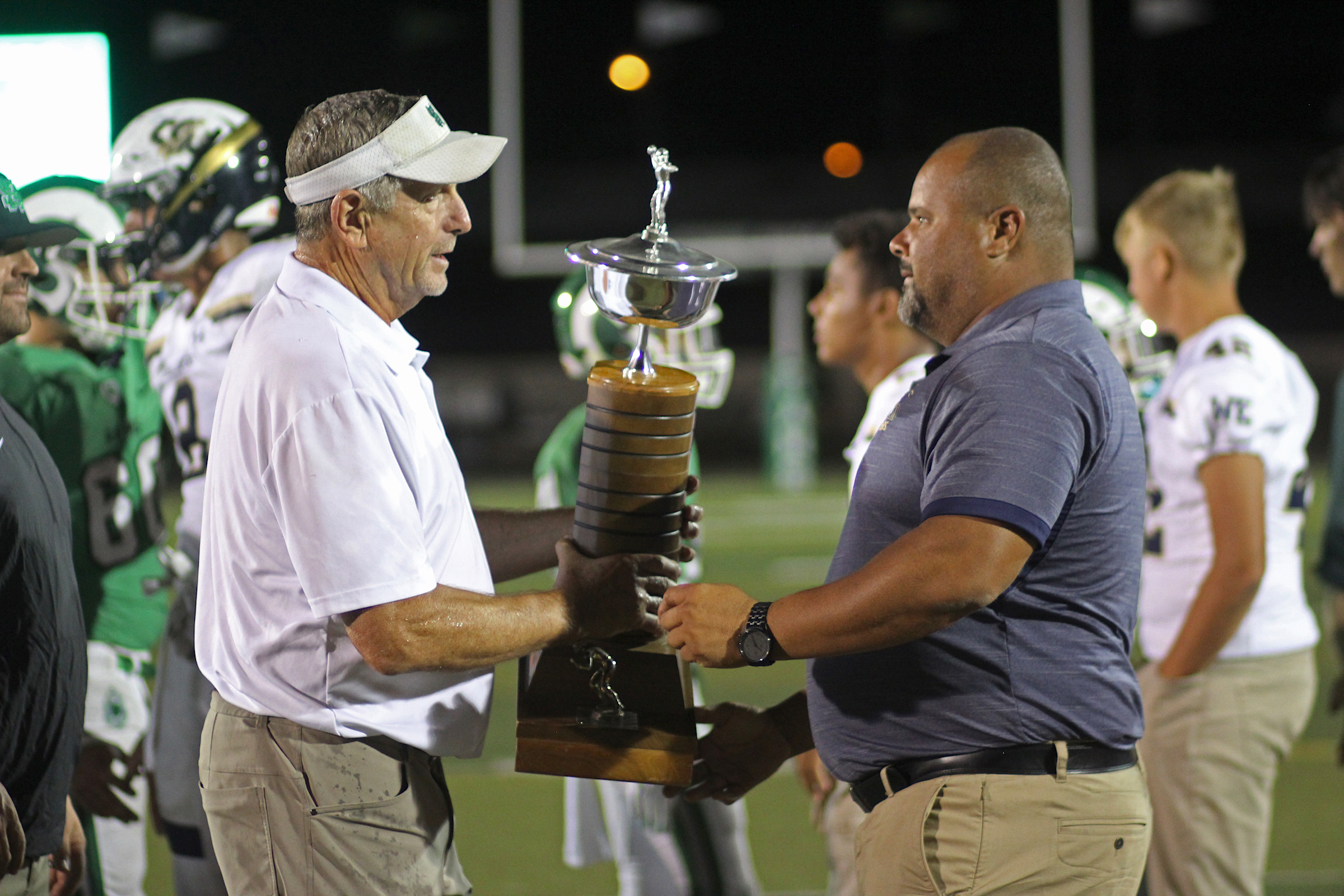 'I'm worried about everything.' Central 0-3 for first time in MaxPreps era.

It belongs to the Raiders’ trainers and sideline doctors, a tireless bunch holding the team together during this frustrating opening stanza.

They remained in hot demand on Friday during a 42-7 loss to rival St. Mary’s in the annual Holy Bowl at Sanguinetti Field.

Central Catholic’s third consecutive loss to start the season was preceded by the loss of a dynamic two-way player on the final play of the Raiders’ opening possession.

Running back and safety Minaya Olivo suffered an apparent head injury on an illegal hit early in the first quarter. Olivo was slammed to the turf while chasing down a punt return.

“I’m not very happy. I didn’t see this coming. I didn’t see Minaya getting hurt,” head coach Roger Canepa said. “That took a little energy out of us, but we still should have hung in there better.

“We went backwards. Why? I don’t know. I know Minaya is a big part of our team. People don’t get it. Once we lose him in the secondary, now we have to move the ‘backers. We don’t have a lot of depth.”

As the Rams sprinted toward the home sideline, hoisting the Holy Bowl trophy for the first time in three years, Central Catholic found itself in uncharted waters. The Raiders are off to their worst start in the MaxPreps era (2004) and “shouldn’t be ranked in anyone’s top-1000,” Canepa fumed.

Wide receiver Jayden Marshall scored three touchdowns on a night when the game started late (8 o’clock) but finished quickly with a running clock.

“We don’t block the right people. We’re not tackling well. We’ve got some guys injured, but … why aren’t we playing better? I’ve got no clue,” Canepa said. “I’m worried about everything. We’re 0-3 and we’ve got injuries.”

Central Catholic began the game with just 27 players in uniform, two fewer than they played in last week’s loss to national power De La Salle. Within moments on Friday evening, the Raiders were reduced to 26.

Olivo had to be helped off the field by medical staff after taking an illegal blind-side hit on punt coverage. Olivo, who carried two times for minus-3 yards on the opening possession, lay motionless for several minutes while coaches, trainers and doctors tended to his injury.

“It changed things,” senior quarterback Dalton Durossette said. “We lost a running back and a starting safety. Like coach says, ‘It’s next man up.’ We can’t blame the loss (on Minaya’s injury).”

Without Olivo, the short-handed Raiders quickly unraveled. St. Mary’s (1-1) jumped to a 21-0 lead at the halftime intermission thanks to Marshall, whose combination of speed and slick moves proved problematic.

The Rams’ super sophomore found the end zone in a variety of ways. He scored on a 9-yard slant to make it 14-0 with 9:15 remaining in the first half. Earlier, it was his 63-yard reception that led to Tyrei Washington’s 22-yard touchdown run to open the scoring.

Just before the half, Marshall scooped up a punt inside his own 10-yard line and raced up the home sideline for a 95-yard kick-return TD.

Marshall capped his evening with a 58-yard scoring run in the third quarter.

“We’re way off. We have problems,” said Canepa, whose team began the season ranked No. 1 in the region but has suffered crushing losses to Clovis West, De La Salle and now St. Mary's. “We have guys not making plays. We’re farther off than I thought.”

Thrust into double duty because of the team’s depth issues, Durossette rarely left the field. He rushed off the edge, stood tall in the pocket, and sent one booming punt after another into the night’s sky.

The workload took its toll on Durossette, an All-Region preseason selection. He completed just one of his first 13 passes as the Raiders' offense ground to a halt without Olivo. The schedule doesn’t get any easier for the Raiders, who travel to Upland of Los Angeles next week.

Sophomore Lyon Colon provided Central Catholic’s only thrill. The sophomore call-up sprinted 80 yards for the Raiders’ lone score in the third quarter. He also had a 37-yard run.

“It didn’t matter if Minaya played or Emmitt Smith,” Canepa said referring to the Dallas Cowboys' Hall of Fame running back. “If we don’t block, it doesn’t matter. We have problems up front. We don’t block the right people.”