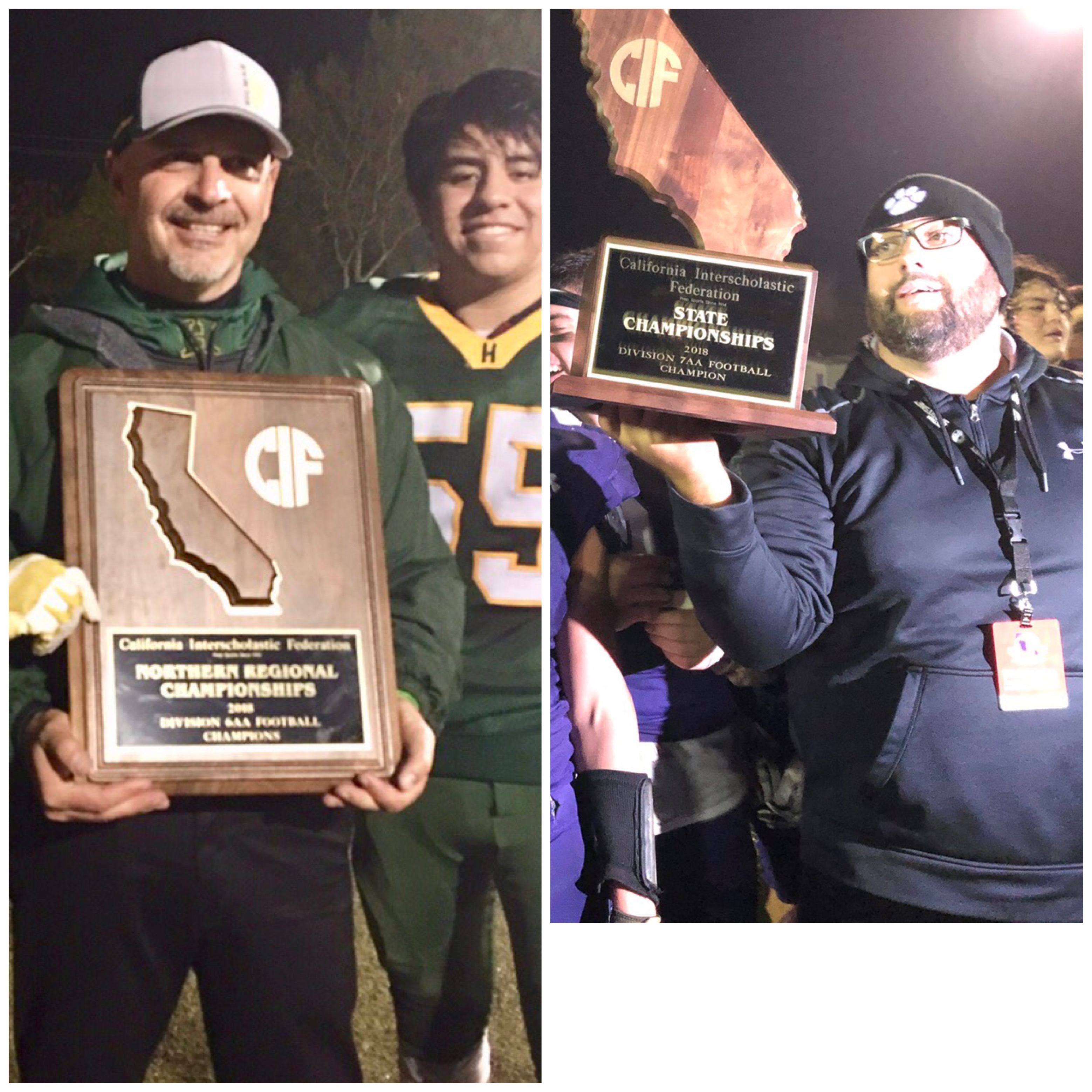 'Hoping we could end on a win.' Coaches of the Year made final STATE-ments.

Hilmar’s Frank Marques and Denair’s Anthony Armas, architects of the region’s only Sac-Joaquin Section and CIF State champions, are the inaugural FrontRowPreps.com Coaches of the Year after guiding their programs to historic heights.

“Right after we came back from Christmas break, that was the kids’ goal,” Marques said after Hilmar's 2017 season came to a screeching halt in a CIF State regional play-in game. “They had a goal to have a state run and make a run at this thing.”

The Yellowjackets finished tied for third in the Trans-Valley League, but caught fire in the postseason, as only state champions do. Hilmar won its final seven games, including the last three in convincing fashion. Behind the inspired play of Isaac Sharp, Justin Rentfro and Treven Crowley, to name only a few, the Yellowjackets routed Ripon Christian in the Sac-Joaquin Section Division VI final, 57-14, and then blasted undefeated East Nicolaus 48-14 in the Division VI-AA regional bowl to advance to the school’s first state final.

The final offered a measure of redemption for the Yellowjackets.

For the second straight year, Hilmar crossed paths with Strathmore, which rallied to beat the Yellowjackets in a thrilling regional play-in game in 2017. Strathmore won in overtime, taking advantage of Rentfro’s fumble inside his own 5-yard line in the final minutes of regulation.

This time around, Hilmar left nothing to chance, 49-0. The Yellowjackets pummeled Strathmore, turning the state bowl into a drawn-out coronation. With four section titles to his credit, Marques is now tied with legendary Hilmar coach Jerry Van Lengen for the most in school history, and he joins an elite fraternity of area coaches with his first state championship.

“I feel like a kid in the candy store,” Marques said following the section championship.

Denair took a similar route to its first state title.

The Coyotes were the runners-up in the Southern League, losing only to Ripon Christian in the regular season, and dropped into the Division VII section tournament. There, Denair was an overwhelming favorite to hoist a section banner and reach the state playoffs.

With four capable running backs, Denair ran wild in the small-school bracket, defeating Golden Sierra in the section final, 43-21. The Coyotes advanced directly to the CIF State Division VII-AA Bowl, where they routed Santee of Los Angeles on a cold, wet night in Denair, 42-14. Steffin Winston and Drew Pritchard rushed for more than 100 yards in the win, as the Coyotes overcame the absence of all-SL performer Hunter Musgrave, who missed the game with a neck injury.

Moments after the game, Armas presented the CIF trophy to the players and the faithful, as if to say, “This belongs to you.” Denair’s rise to state champion wasn’t easy. When Armas returned to his alma mater in 2015, he endured lean seasons with dangerously thin rosters and the uncertainty of a school district in financial crisis. A year ago, the Coyotes won just two games and missed the postseason.

This fall, they won it all, including a record 13 games.

“We’re going to take a few weeks off and enjoy this, and then come back together in January,” Armas said after the state bowl. “I think for the community and the kids that are here right now, this is huge.

“Winning the section title is huge, but if you go and lose a state title, it takes away from the section title. So I was really hoping we could end on a win and get these kids out on a high note.”

Thursday, Dec. 27: Coaches of the Year

Saturday, Dec. 29: Player of the Year