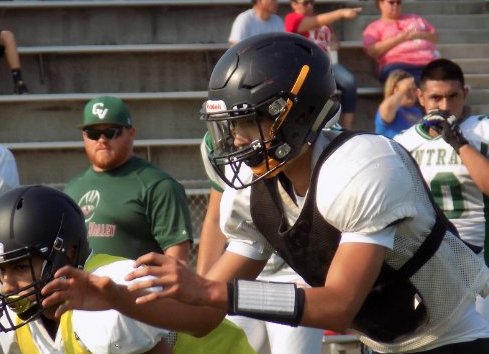 Hughson High quarterback Steven Morris had to sit out one season after transferring from Oakdale High. He made his debut in Friday's victory over Stagg. (Conor McGill)

HUGHSON — The Hughson High football team pulled off a stunning 40-39 victory over Stagg to kick off the season.

Carlos Arreola sealed the game for Hughson with a 30-yard rushing touchdown topped off with a two-point run by Steven Morris, giving Hughson a seven-point advantage with 7 minutes remaining in the fourth quarter.

Stagg answered with a score and attempted to take the lead but had a two-point pass conversion fall short, sealing the Huskies’ victory.

Morris stepped back on the field for the first time in a year after having to sit out last season due to a Sac-Joaquin Section transfer rule. It also saw Shaun King pick up his very first win in his debut as Hughson’s new football head coach.

“Feels pretty good to be back after sitting on the bench for a year watching everybody play last year,” said Hughson quarterback Stephen Morris. “For the TVL, we are coming for you.”

Stagg jumped on the scoreboard first with Keith Smith hauling in a 28-yard pass from Cameron Deville.

Hughson’s Morris responded four minutes later with a 2-yard touchdown run. Arreola’s point-after kick tied the game at 7s, but the momentum was short-lived. Stagg regained the lead with a 64-yard scoop-and-score fumble return to close the first quarter.

The second quarter remained one of the quietest out of the four, as both teams picked up their defense. Stagg extended their lead with a 35-yard pass to Dominique Jones with eight minutes left in the quarter. Hughson closed the gap just before the intermission with a 1-yard quarterback keeper by Morris to draw within seven of Stagg, 20-13.

Jacob Johnson started off the third quarter with a 3-yard touchdown to help Hughson knot the game at 20-20.

Stagg’s Deville later broke the tie after completing a 9-yard pass to James for a touchdown to retake the lead.

However, Johnson closed the quarter out for Hughson with a 6-yard rushing touchdown in the final seconds to close Stagg’s lead to one, setting up a tense fourth quarter.

“I’m lost for words. The boys played so hard tonight,” King said. “It was a fun game going back and forth. It was basically like playing chess.”