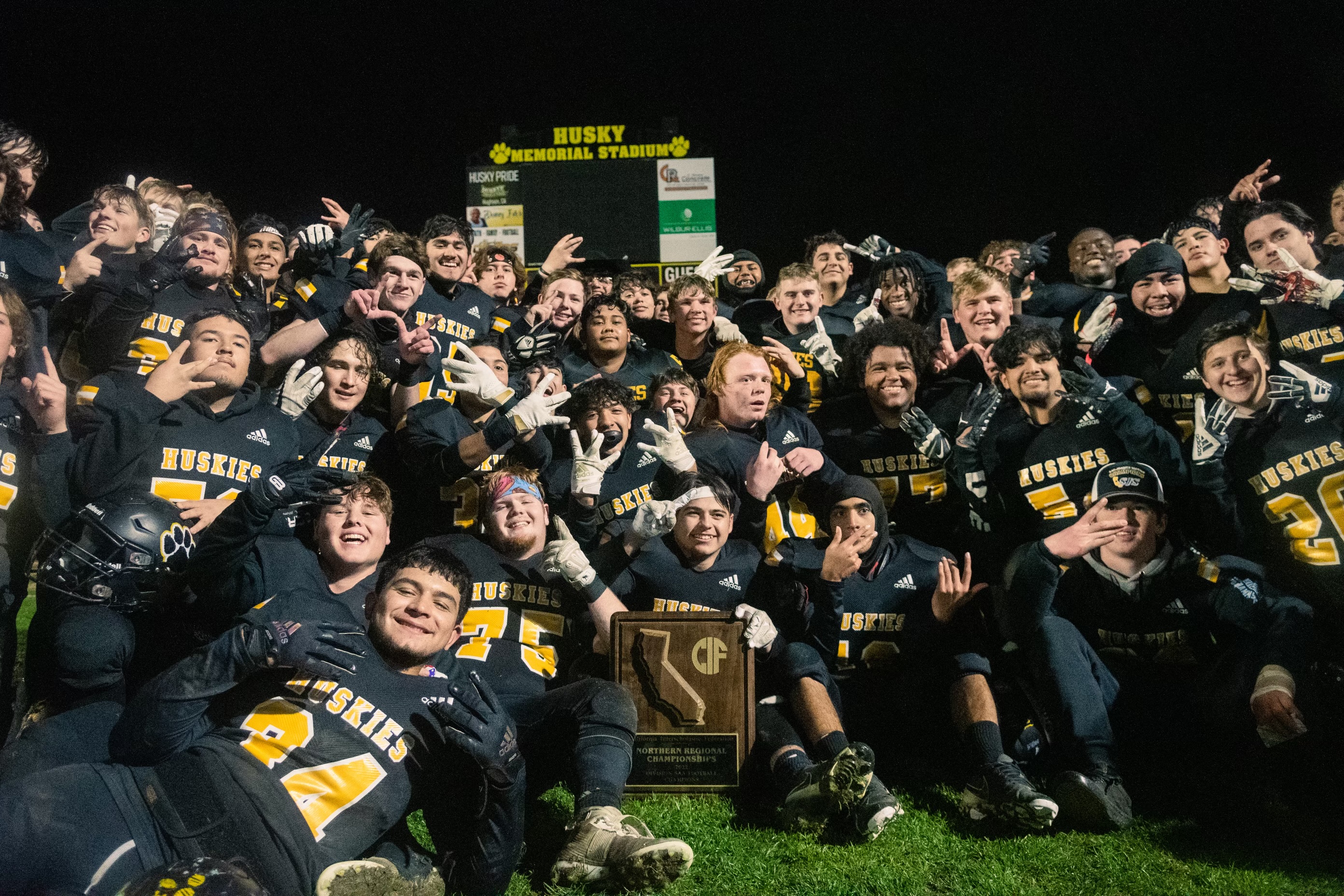 No quit, no surrender: Hughson rallies from behind to earn first NorCal title

Recovering from an 18-point deficit, the Huskies secured their first NorCal title with an end zone interception and defeated the Ripon Christian 31-28.

The NorCal title, a historic first for both teams, was decided in the final few seconds of the game. After the Huskies scored 21 unanswered points in the fourth quarter and took the lead for the first time, Ripon Christian took possession of the ball with 11 seconds to go.

Every fan in the stadium was on their feet screaming. Carson Bunnell recovered a failed onside kick attempt by Hughson at the Knight’s own 38-yard line. Ripon Christian made two drives. Four seconds left and quarterback Trey Fasani set his sights on Eli Terpsma. He let the ball fly, Terpsma ran, and Hughson junior David Delgado, perfectly positioned, intercepted. Game over.

With four nail-biting wins in a row on the books, Head coach Shaun King acknowledged that his team doesn’t make it easy on themselves and admitted, “this is what we do, that is what this team does.” But he takes pride in their resilience. “This team…there’s no quit, there’s no give up…This team is a family and they have everybody's back. I’m so proud, so proud of them.”

When asked, “did you really just come back from 18 points down?”, senior running back Liam Bridgford was still in shock. “It seems like it, but I don’t believe it,” he laughed. Bridgford, who has over 100 touchdowns and 1,400 rushing yards, was critical to the Huskies’ victory.

Halfway through the fourth, Bridgford rushed seven yards for a touchdown and followed up with a two-point conversion, Hughson’s first points since the second quarter. His success seemed to revitalize the Huskies. “We were down a lot of energy, but that touchdown and two points really brought us up and brought us together,” he reflected.

Hughson capitalized on that energy. At 6:36, Robert McDaniel connected with an untouchable Delgado for an 83-yard touchdown, bringing victory back into reach. The Knights were unable to make much progress on their series and punted the ball back to Hughson’s nine-yard line.

After a streak of exchanged penalties, on their fourth down with 20 yards to go, McDaniel completed a long pass to sophomore Malakai Sumter. This was another pivotal moment for King. “Football is about momentum,” he said. “Once we got that fourth and 20, I knew we now had it.”

One minute to go. The Huskies racked up three first downs before getting stuck just short of the goal line. Second and two…third and one…fourth and one…With 11 seconds and one yard left, Alex Villarreal leaped across the line to finally bring Hughson into the lead, 31-28.

The Knights were not ready to give up, but Delgado’s interception ended it. RC head coach Phil Grams was pained by the loss, but immensely proud of his team and his program’s first-ever appearance in a NorCal Bowl game.

“In the first half, everything went our way and it looked like we were going to be able to survive the battle of attrition without [injured starters Griffin De Abreu, Jacob Kowes, and Thys Van Der Hoek], but it just didn’t go that way,” Grams said.  “We had a great season, nothing can tarnish what we do.”

The Knights took the lead 8 minutes into the game with a 24 yard rushing touchdown by Derek VanElderen. Hughson’s Delgado dragged several Knights with him across the goal line to tie up the game. The tie was short lived as less than two minutes later, Fasani completed a 55-yard TD pass to Terpsma and brought the score to 7-14.

A minute until halftime, the Huskies are stalled the 24-yard line after a long, fruitless series. Kicker Ernie Mendonza (who completed all but one extra point) scores a field goal. RC’s Brady Grondz immediately rallied with 80-yard kick return for a touchdown. The third quarter was slow, but Jace Beidleman scored the Knight’s last touchdown of the game.

After missing the TVL title, Villarreal and his teammates have kept their eyes on the ultimate prize. “When we won the blue banner, we said, ‘Let’s go win it all!” Now, they are on their way to compete in their first ever State Bowl game. Hughson won a State Championship in 1997 (seven years before any of their current players were even born), but the regional and state bowl system did not yet exist. King and his Huskies are excited. “I can’t wait for next week!” said King.

The Hughson Huskies will take on the Muir Mustangs of Pasadena for the State Championship at home on Saturday, December 10 at 6:00 pm.

Samantha Schmidt is a freelance photographer and reporter with FrontRowPreps.com. Her work has also been featured in the Turlock Journal and other Central Valley publications.