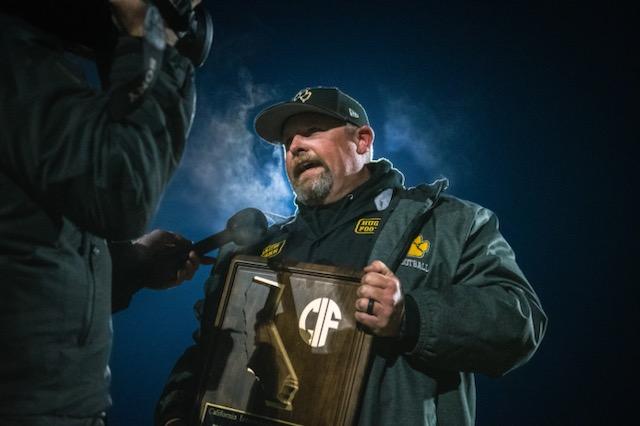 Hughson head coach Shaun King shows off their NorCal Championship plaque while being interviewed after a nail-biting win over Ripon Christian. (Diego Hernandez)

The Cardiac Kids, as the Huskies have been dubbed by the Hughson community after their last four down-to-the-wire wins, are state championship bound. The Huskies are chasing their first state title since 1997 and their first CIF State Football Championship Bowl win ever.

To earn their berth to state, the Huskies won their first ever NorCal title by defeating the Ripon Christian Knights 31-28. In what’s become their signature nail-biting finish, Alex Villarreal caught the game-winning touchdown with 11 seconds remaining. Seven seconds later, David Delgado, who leads the team and is 10th in the Section with six interceptions this season, nabbed an RC pass to secure their victory.

According to Hughson head coach Shaun King, a lot of people he spoke to didn’t even know what a NorCal game was.

“This is a big deal for the community,” said King.  “It’s never been done in Hughson.”

For King, it’s a surreal experience.

“It's something that every coach talks about all through summer,” he said. “And we’re living it.”

Their first practice of the 2022 season was on May 31 in the heat of early summer.

“We always say ‘sweat it out now, so we can freeze in December,’” King recalled.

Nearly six months later, with temps in the low 50s and rain in the forecast, “It all came to fruition,” continued King.

The Huskies took the Sac-Joaquin Section title and corresponding blue banner in a signature narrow victory over Summerville, despite missing out on the Trans-Valley League title weeks earlier.

“League titles are nice, but there's nothing like holding up that blue banner,” said King.

But a state championship is a whole different ball game.

“This is the ultimate goal for every team and we get to play it out,” said King.

They’ll be taking on the John Muir High School Mighty Mustangs, the SoCal 5-AA champions. Muir High School has a storied history and counts the legendary baseball player Jackie Robinson among their alum.

“They’re a very good football team, a lot of speed, good size,” said King. “It’s going to be a battle.”

At halftime last week when the Huskies were down by 11 points, King recalls saying, “‘I don’t know why you boys put us in these situations, but now we gotta find a way.’”

But he is prepared for another tight game with The Cardiac Kids.

“I’ve upped my blood pressure meds the last couple of weeks. My doc is there for me.”

While the Mustangs will be traveling over 300 miles to vie for the state championship, the Hughson Huskies don’t have to go anywhere.

“To have the privilege to host a state game, you can’t imagine a better situation. I’m sure rain or shine, we’re going to pack the stands,” King said. “To get to play in front of our home crowd — it's magical.”

The Hughson Huskies take on the Muir Mighty Mustangs on Saturday, December 10 at 6:00pm at home in Husky Memorial Stadium. Tickets are available online only through gofan.co.