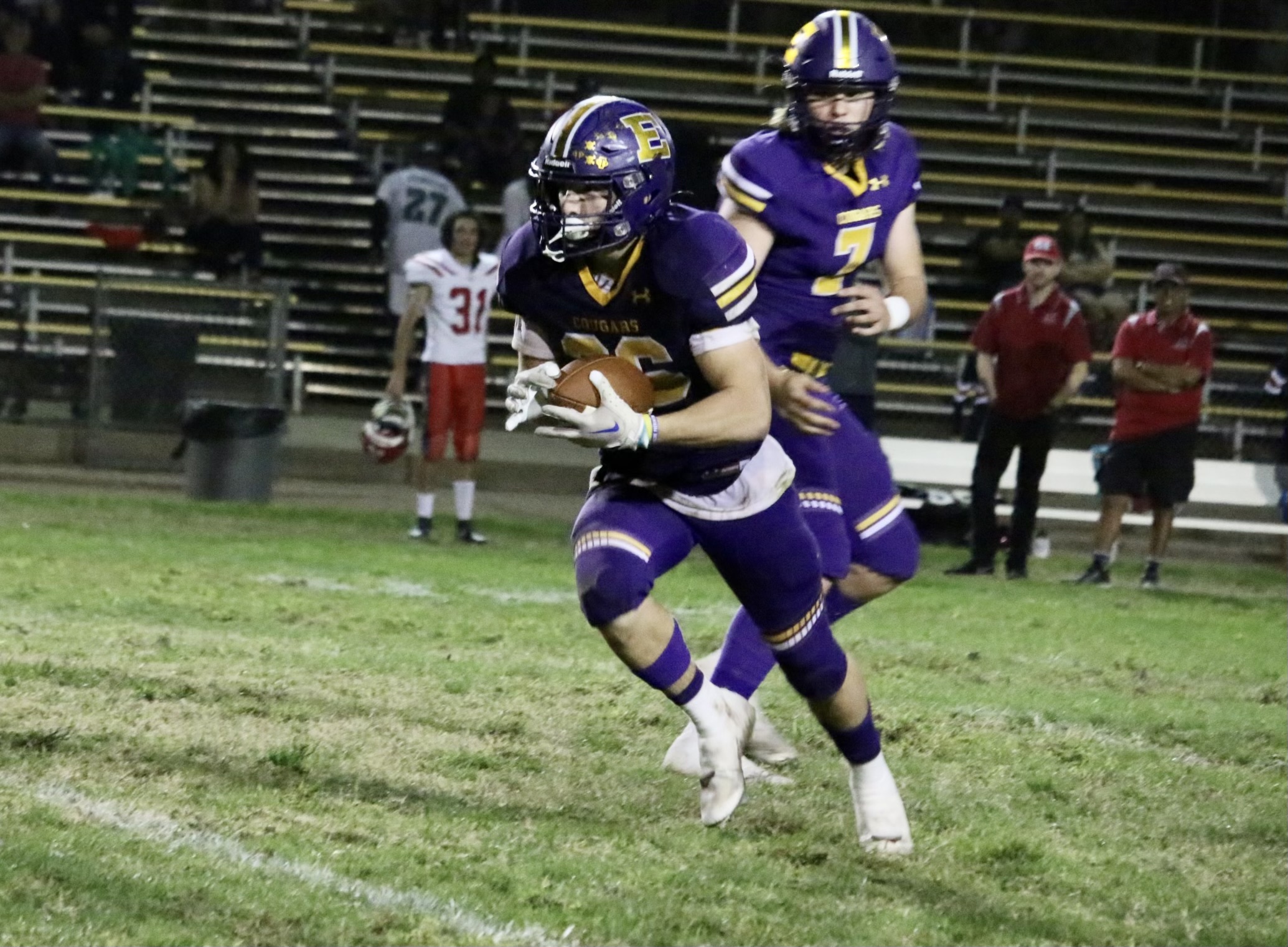 Escalon linebacker Jamin Miller had three touchdowns, two on pick-sixes, to highlight the rout of Modesto Christian on Thursday, Oct. 6, 2022.

ESCALON – The descriptions of the Escalon High Cougars’ mood this week ranged from frustrated to angry, to – tellingly – quiet.

Their 21-20 disappointment at Hilmar last week resulted in back-to-back Trans-Valley League losses for the first time in four years. Their response Thursday night was what was expected from one of California’s proudest small-schools programs.

“Let’s start a winning streak,” coach Andrew Beam told his team after Escalon’s no-doubt 62-30 victory over Modesto Christian at Engel Field. The Cougars (4-3, 1-2) opted for reserves early in the second half, and the officials wound the final 4:59.

Escalon, the defending TVL champion and consensus favorite to repeat, has tumbled out of the race after numbing losses to Hughson and Hilmar. It was outplayed by the Huskies 29-14 but believed it should have beaten the Yellowjackets.

“It was quiet this week. This is a group that has been humbled,” Beam said. “The TVL is a tough league. This group was reminded of that the last two weeks. It was a humble reminder that you have to work day in and day out.”

The Cougars quickly changed course against Modesto Christian (5-3, 1-3). Jamin Miller, a tough-minded junior inside linebacker, read the eyes of quarterback Ross Widemon, intercepted the pass and raced 38 yards for the game’s first touchdown.

It was the beginning of a banner night for Miller. He tacked on two TDs in a 1:07 span of the third quarter—a 28-yard run on offense, and another pick-6, a 14-yard return of a pass tipped by sophomore Ryan Lewis.

That expanded the lead to 48-14 left in the third quarter, and Beam emptied his bench.

“Our main goal was to play hard and get the people on the practice squad as many plays as possible,” Miller said.

Mission accomplished. Reserve running back Josh Graham took full advantage of his chance by rushing for 170 yards on only eight carries and two fourth-quarter touchdowns. He capped the win in the final minutes with an 84-yard scoring rip past the MC bench.

Escalon quarterback Donovan Rozevink tossed only two passes, both for touchdowns – 39 yards to Owen Nash and 40 yards down the seam to Lewis.

The Cougars did not punt. Instead, they pounded for 342 yards on the ground. Logan Anderson, one of Escalon’s strong running backs, turned in the play of the night, a 67-yard punt return for a touchdown late in the first quarter.

Anderson angled to his left, weaved through traffic and absorbed a vicious hit by Modesto Christian’s 270-pound Division I recruit Manasse Itete. The impact jolted Anderson back a few yards, but he then reversed his field, found a convoy of guys wearing purple and finished off the return.  The play demonstrated Escalon’s physical superiority.

“Their line and their linebackers…that’s their strength against our weakness,” Modesto Christian coach Jeff Grimshaw said.

Modesto Christian leaned on its strength—passing quickly to its wide receivers—and had success. Widemon, a sophomore, and senior Raymond Corral Jr, combined for 360 passing yards and three touchdowns. Corral also overcame tight coverage and finished off a 52-yard lob from Widemon for MC’s first touchdown.

Receiver Jeremiah Bernard, enjoying a good season, was the busiest Crusader with 15 receptions for 168 yards and two TDs. On the game’s final snap, he broke tackles en route to a 51-yard catch-and run TD.

“Not in my wildest dreams did I think we’d get 30 on them,” Grimshaw said.

Both teams had one eye on game night and the other down the road. The Crusaders can put themselves in the Sac-Joaquin Section playoffs equation with a win next week over Livingston.

Escalon, heavily favored over Riverbank next week, must heal several of its key players to make a run in the bracket. They may have solved the kicking miscues that have been so costly. Talan Reider gave his team a boost by converting eight of nine conversions.

“We’re not going to get the seed that we desire,” Miller admitted. “If we have to roll into other peoples’ stadiums, we’re going to do that.”

Escalon’s ally is time, as long as it leaves its losses in the past.

“We’ve lost games because of all the little things that added up,” Beam said. “(We have to) make a push that we need in October and November. Time to regroup and refocus.”