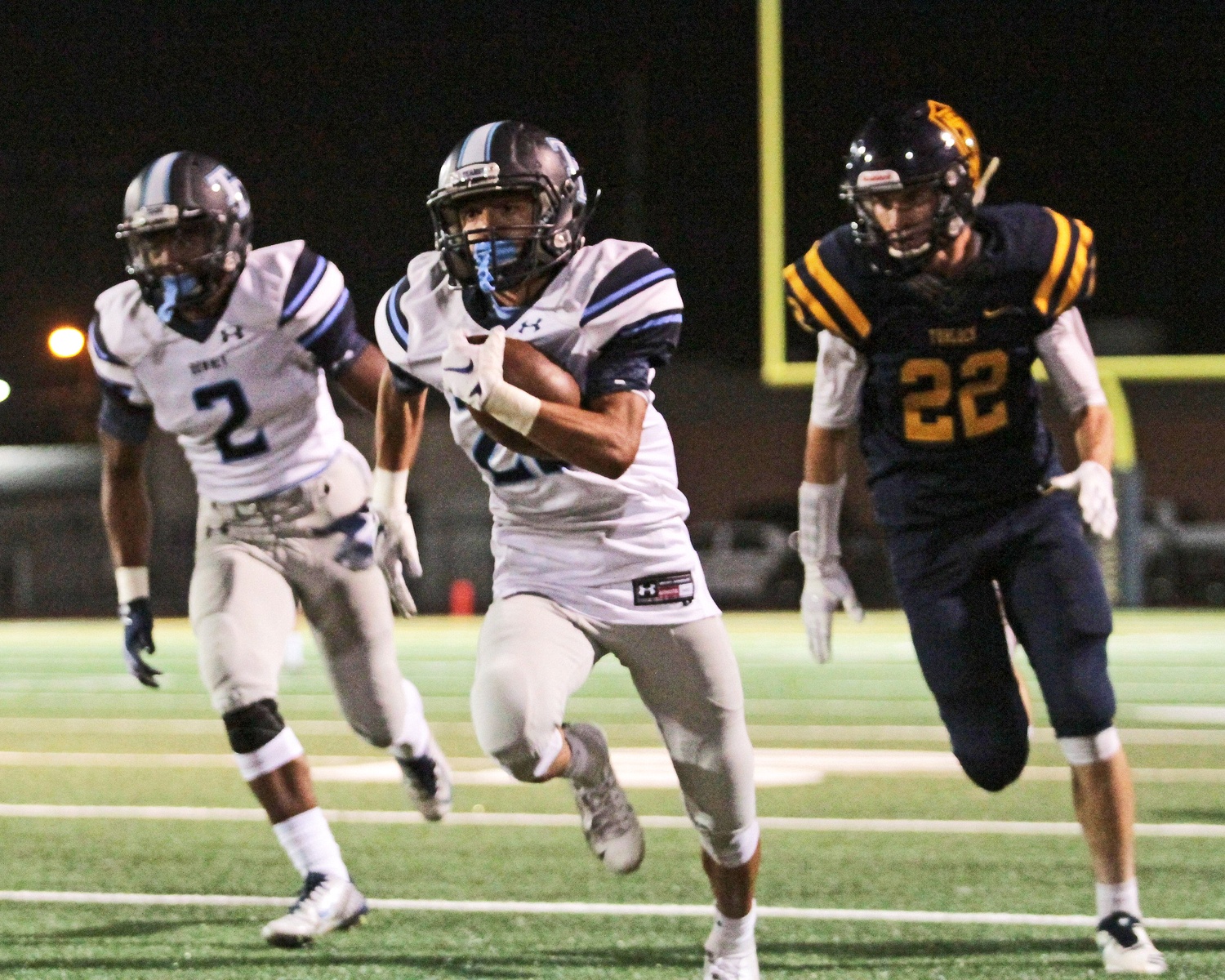 If the Sac-Joaquin Section playoffs started this Friday night, the Downey Knights, currently No. 13 in CalPreps' Division II rankings, would be on the outside looking in. Photo by Dan Harris.

If the playoffs started Friday, would your team have a ticket to the big dance?

There are four weeks left in the Sac-Joaquin Section football season, an eternity in the world of high school athletics. Anything can, and probably will, still happen.

And though there's a lot of road ahead, the postseason picture is starting to come into view. And this year, the section has gone to a different playoff format.

Only league champions gain automatic entry into the playoffs. After that, the remainder of the 12-team playoff brackets for divisions I through VI (D-VII is a six-team affair) will be filled with teams determined by CalPreps.com, which uses an advanced algorithm to rank every team in the section.

In other words, if today you're sitting at No. 13 or lower in any of CalPreps' divisional rankings, you've got work to do.

"I don't pay too much attention to it, but I am curious," said Downey head coach Jeremy Plaa, who has guided the Knights into the postseason for eight consecutive seasons. "I think we're a playoff team. We easily could be 6-0 right now."

Indeed, the Knights were just one play from turning narrow losses into victories against  Merced (No. 3 in the section's Division IV rankings), defending state champion McClymonds (No. 1 in the Oakland City Section) and Turlock (No. 6 in Division I). Had they won any or all of those games, their playoff future would be much different. As it stands today, they need help.

Downey is likely to get that help from the Sierra Foothill League.

No. 5 Granite Bay (3-4) and No. 8 Rocklin (2-5), at this minute, both sit ahead of the Knights in the D-II rankings. But neither has reached four wins and one of them is unlikely to do so. Granite Bay has games againt mighty Folsom and Oak Ridge, while Roklin must play stalwarts Grant and Del Oro before they meet each other in the SFL finale. That game likely will be a loser-is-out affair, creating an opening for Downey.

Also, it would benefit the Knights if Edison (No. 8 in D-I) won the San Joaquin Athletic Association crown. Edison already sits among the ranked teams. None of the other SJAA clubs are ranked higher than 15th. But if one of them should become the surprise champion of the SJAA, they would gain automatic entry as a champion and take up a spot nobody expected them to have, thus pushing all the other at-large teams down a notch.

Modesto, which already owns four wins and sits 13th in the D-I rankings, but No. 12 Lincoln (1-5) has virtually no shot at getting to four wins, so, by default, the Panthers would grab that final spot.

In Division III, Atwater is No. 12, but No. 17 Cordova probably will win the weak Greater Sacramento League, and the Lancers would take the Falcons' place in the bracket. Los Banos has the same problem (3-3), with No. 13 Woodland capable of winning the Golden Empire League.

Friday night's Central California Conference between Merced (6-0) and Buhach Colony (5-1) in Atwater has playoff implications. If the Thunder (No. 2 in the D-III rankings) was to hand the Bears (No. 3 in Division IV) their first loss, they'd take the inside track toward the CCC title. Merced would still get in, but not as a champion of a D-III-rated league. They'd go in as an at-large and would likely drop into the D-IV bracket where they'd be an overwhelming favorite to win their first section title since 1990.

Modesto Christian likely is the No. 1 seed in Division V, and would earn a first-round bye as it seeks its first section banner since 2009.

Notably missing from the D-V bracket is Sonora, a team that hasn't lost a league since it joined the Mother Lode League in 2014. But, going strictly by CalPreps' projections, the Wildcats won't get to four wins and will be left out of the postseason party for the first time since 2013.

In Division VI, Hilmar, Ripon and Ripon Christian all would get first-round byes, along with Colfax. Ripon and Ripon Christian could potentially meet in the semifinal round on Nov. 16. As it stands, Escalon would be the No. 5 seed, setting up a potential rematch with Hilmar in the quarterfinal round on Nov. 9. The 4-2 Cougars (ranked No. 4 among D-VI teams) lost to Hilmar 20-17 in overtime on Sept. 21, then lost 7-6 to top-ranked Modesto Christian on a Hail Mary pass. A few inches here and there and Escalon would likely be atop the D-VI rankings.

In D-VII, Denair would be the top seed, with Stone Ridge Christian on the outside looking. Big Valley Christian, Waterford and Gustine also would get in.

* Let's start by taking a quick look back. In the past, each league in the Sac-Joaquin Section produced a certain number of automatic qualifiers. After the automatic qualifiers were determined, the section would fill the bracket slots by choosing non-automatic qualifiers with the highest win totals. If there were any eight-win teams that didn't get in automatically, they'd receive an at-large berth. Then all the reamining seven-win teams were invited, then all the six-win teams, until all slots were filled. Divisions I through III featured 16 teams, while divisions IV through VI were eight-team affairs. Division VII was a six-team bracket.

* Under the new format, all divisions will utilize 12-team brackets, except for D-VII, which remains a six-teamer. That means the top four seeds, and the top two in D-VII, will get first-round byes. Only league champions gain automatic entry into the dance. The remaining spots are determined by the CalPreps.com rankings.

* Regardless of the CalPreps rankings, teams must have at least four wins to qualify for the postseason, though, league champions qualify regardless of win total.

* If a team wins a Divsion I league title, that team must play in the D-I playoffs. St. Mary's (Stockton) is prime example. Wiht less than 900 students, St. Mary's is about the size of a Division V school. But the Rams likely will win the TCAL and, as champions of that D-I league, must be placed in the D-I bracket.

* Conversely, teams cannot drop more than one rung below their league level. For instance, Oakdale plays in the D-III Valley Oak League. If the Mustangs win the VOL title, they'd be forced to play no lower than the D-III playoffs. If they don't win the VOL, they could drop into the D-IV playoff field. But as a member of a D-III league, that's as low as they could go. D-V would be off limits to them because that's two steps below their league level.

* Some teams, regardless of enrollment or league, are required to play in a certain division for the playoffs. Manteca is such a team. Manteca is the reigning section champion for Division III. Unlike Oakdale, if the Buffaloes don't win the VOL title, they could not fall into the D-IV field, because reigning champions must be placed no lower than the division in which they won their title.

* At this point, 78 teams are ready to be placed in their respective brackets. The top 12 teams are plucked from the D-I list, assuming they all have four wins and assuming no team ranked 13th or lower is a league champ. If there is a champion ranked 13th or lower, that team is added to the pot and the lowest-ranked team gets bounced.

Now, the Division I bracket gets filled by teams with the 12 largest school enrollments.

Remember, St. Mary's must be placed in the D-I field as winner of the TCAL. Folsom is projected to be the champ of the D-I Sierra Foothill League and must be placed in this bracket. So, too, must Jesuit, the projected winner of the D-I Delta League. That leaves nine slots to be filled, and the nine largest schools left on the board are selected, regardless of their status as a league champ or an at-large.

* Now the process starts again for Division II. All the champions of D-II leagues are placed in this bracket, assuming they weren't one of the nine  schools that were used to complete the D-I bracket. Turlock, Monterey Trail and Edison are projected champs of Division-II-rated leagues. But because of their large enrollments, they were among the nine used to complete the D-I bracket. That leaves Inderkum, projected champ of the section's fourth D-II conference -- the Metro League.

Now, the no "no-lower" teams are placed. With 369 students, Central Catholic has an enrollment on par with Division VI school. But because of the Raiders' sustained success, they've been promoted over the years all the way up to Division II, and must play no lower than D-II. The section also mandates that Del Oro, Grant, Vacaville and Elk Grove play no lower than D-II. In they go to join Central Catholic and Inderkum. That leaves six slots open and the next six largest schools fill these openings. And the process starts again for D-III, and so on.

* Finally, remember this: CalPreps.com picks the teams that go into each bracket, but the section's seeding committee can switch the seeds around. Modesto Christian is the No. 1-rated Division VI school. It stands to reason they'd get the top seed and a first-round bye. But if the section believes another team is more deserving of the top spot, it can flip-flop their positions.

So, there you have it. A look at how the section will select the 78 teams for this year's playoffs. It can get a little complicated. But there is a simple way to simplify the process ...

Win all your games.