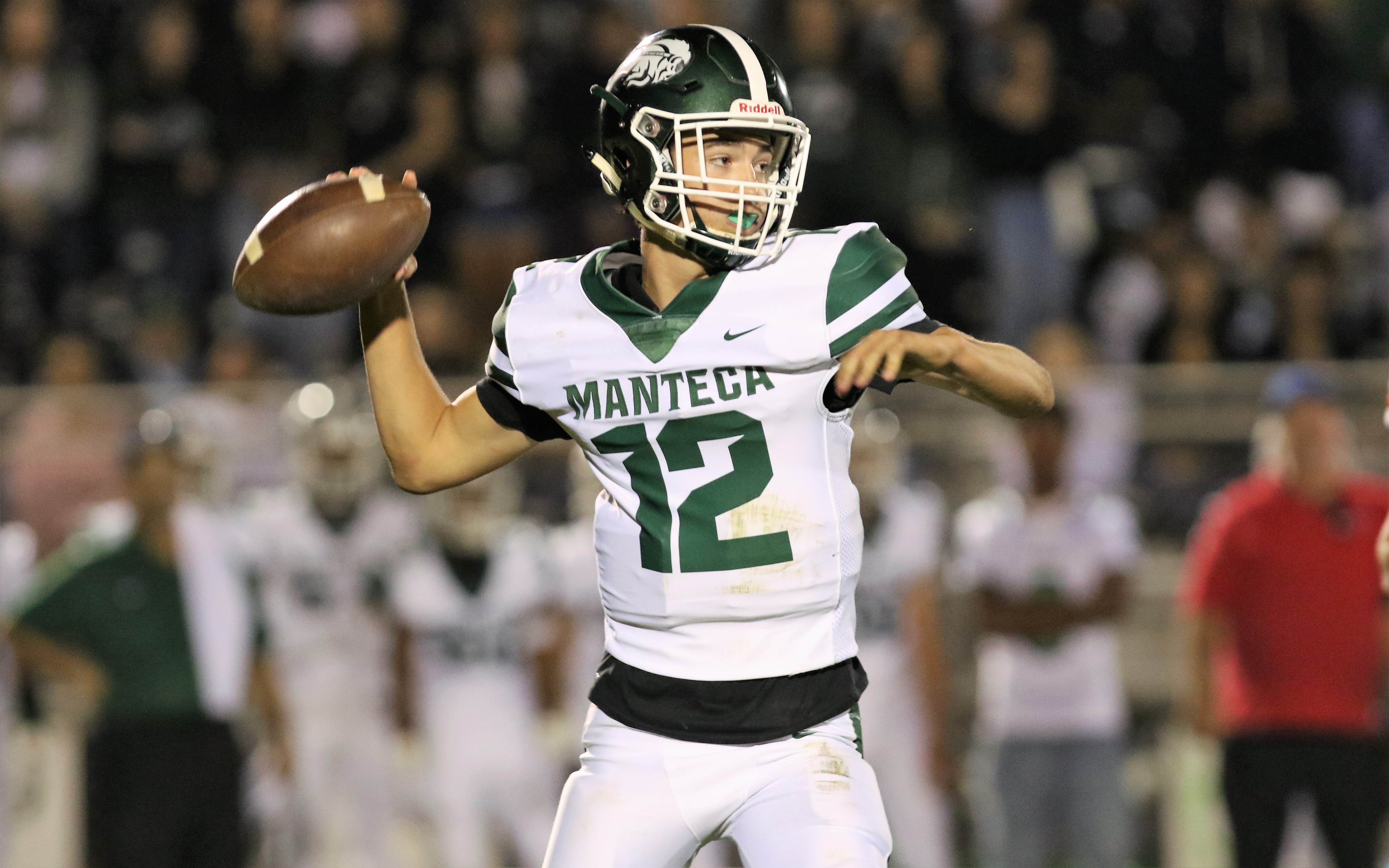 In good hands: Who are the region's top returning quarterbacks?

Soon they will command a collegiate mound, staring down the opposition with a pearl — not a pigskin — in hand, but not before they take one last spin through a high school huddle.

Manteca High’s Ryan Ward and Central Catholic’s Dalton Durossette rank among the top young pitchers in Northern California. Each has accepted a scholarship to a nearby Division I university. Ward will toe the rubber at the University of the Pacific, while Durossette will pitch for Santa Clara University.

Before they go, though, they’ll live out their football dreams for perennial Sac-Joaquin Section title contenders and Valley Oak League rivals.

Ward is part of a talented senior triumvirate that includes running back Trabron Russell and reigning VOL Offensive MVP Jacob DeJesus, his favorite down-the-field option. Ward threw for 1,907 yards and 22 touchdowns in his first varsity season, completing about a third of his throws to DeJesus.

Durossette won a fierce battle with 2017 starter Kyle Jackson that extended into the season. Once the position was his, though, the 6-foot-3 pocket passer flourished. He threw for 1,420 yards and 18 touchdowns, completing 60 percent of his throws as the Raiders navigated their way to the Sac-Joaquin Section Division II final. Durossette was at his best in a runaway victory over rival Oakdale, gashing the Mustangs for 219 yards and three TDs on just five completions.

Ward and Durossette aren’t part of a deep returning class of quarterbacks, but the group has the potential to be explosive. Here’s a look at a few more of the familiar faces commanding huddles around the region:

Bryce Gouker, Downey: Last fall, Davis’ Xavier Rodriguez, now on scholarship at Arizona Christian University, hovered near the top of the Sac-Joaquin Section passing charts, stealing some of the shine from a pass-happy, around-the-corner rival. This season, the Knights’ Air Raid offense should regain its mantle as the region’s top passing attack. In his second season at the helm, Gouker will look to build upon a strong junior campaign in which he completed 70 percent of his passes. He had 1,966 yards and 25 touchdowns against just eight interceptions as Downey transitioned into the Central California Athletic League. Downey doesn’t return its top-two threats at the wideout position — Anderson Grover and Bryce Peterson — but coach Jeremy Plaa expects a big jump from Bronson England and Ethan Difuntorum.'

Logan McCleery, Patterson: McCleery showcased his potential in 2018, throwing for nearly 2,000 yards and 11 touchdowns as the Tigers shifted out of the Western Athletic Conference and into the Central California Conference. He also showed his youth, completing less than 50 percent of his passes and throwing 26 interceptions. McCleery is bolstered by talent, including 1,000-yard running back Jordan Imada, but the Tigers’ success will hinge on his accuracy and efficiency.

Steven Morris, Hughson: Morris was an intriguing dual-threat a season ago, accounting for 1,690 yards of offense and 11 touchdowns. However, injuries fast-tracked sophomore Aiden Meyer, who was called up to start Hughson’s playoff loss to Amador. Coach Shaun King believes Morris will play an integral role on both sides of the ball for the Huskies, but his place under center isn’t guaranteed. King believes the battle between Morris and Meyer will stretch into the final scrimmages.

Elvis Silva, Denair: Elvis has NOT left the building and that's a good thing for Denair football fans. After helping guide the Coyotes to a 12-win season and the school’s first CIF State championship, Silva is one of several key returners for coach Anthony Armas. Silva is joined by running back Dylan De Silva and lineman Carlo Morales.

Nolan Lingley, Ripon Christian: Lingley could be the breakout star of 2019. He appeared in just five games last fall before a shoulder injury brought his junior season to a screeching halt. Lingley had surgery on the eve of the Knights' Southern League clash with Orestimba, and his presence on the sideline -- arm in a sling -- inspired Ripon Christian to a power-shifting 23-17 victory. When healthy, Lingley, another dominating force on the diamond, has proven to be an efficient, charismatic leader for the Southern League champions. He completed 14 of his 21 passes for 284 yards and three touchdowns. Locked in a position battle last fall, Lingley isn’t competing for reps this season; he’ll start the season as the Knights’ triggerman. "He's got the 'it' factor," one coach said.

Did we miss someone? Let us know with a message at frontrowpreps@gmail.com, or connect with us on Twitter @frontrowpreps.