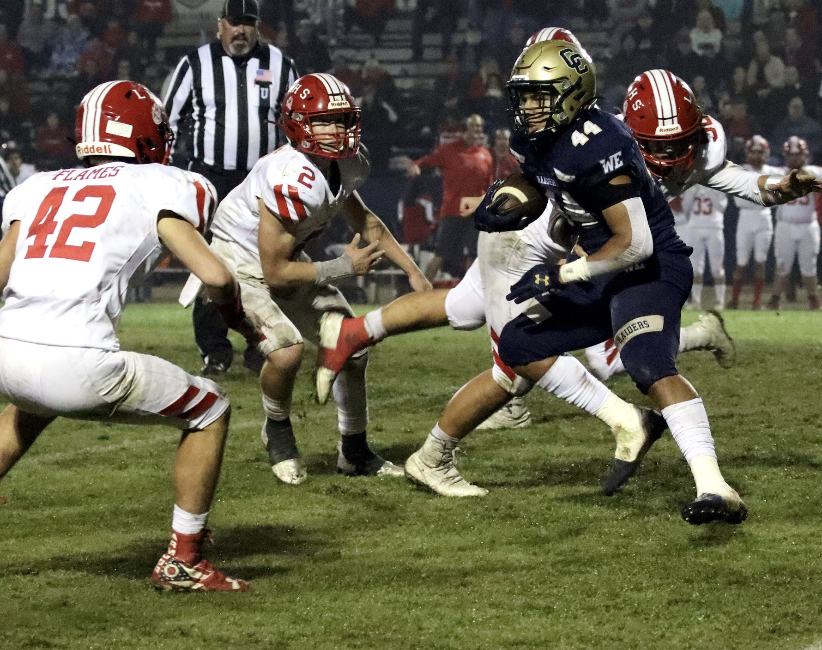 Central Catholic running back Aiden Taylor looks for a crease through the Lodi defense during a come-from-behind 38-34 win in the second round of the Sac-Joaquin Section Division II playoffs. (Samantha Schmidt)

'It took a little off my life,' Canepa says: CC needs last-minute heroics to top Lodi

MODESTO — Pushed to the brink by a No. 9 seed, Central Catholic coach Roger Canepa searched for ways describe his team's last-minute 38-34 victory.

In between exhausted sighs, this is what he came up with:

All three accurately describe the surprising back-and-forth battle the ensued at David Patton Field on Friday night in the second round of the Sac-Joaquin Section Division II playoffs between the top-seeded Raiders and the underdog Lodi Flames.

Lodi entered the game with momentum in its sails after snapping Downey's 10-game winning streak in the first round. The Flames grounded the Knights' aerial attack by dominating the ball and forcing turnovers.

That game plan nearly turned the Division II bracket upside down on a foggy Friday evening. Lodi (8-4) led 34-32 inside the final minute, but couldn't complete the upset. Aiden Taylor burst up the middle for the eventual game-winning score with 40 seconds left, and his backfield partner, Julian Lopez, sealed the win with a rare sack on the final play. Canepa rushed Lopez, a bulldozing fullback, into the game to create pressure in the backfield.

"He doesn't usually play nose," he said. "We just stuck him in there to get a little more heat. We needed it."

Central Catholic (10-1) will host No. 4 Antelope, unbeaten in 10 games this season, in the semifinal round on Friday. Antelope edged Whitney, 20-14.

"We found a way to win," Canepa said. "That's playoff football right there."

The Flames led 15-10 with 4:50 left in the first half, but Lopez powered in from the 3 to give Central Catholic a 17-14 lead at the intermission. Lodi trailed by 10 or more twice in the second half, but looked poise to knock off one of the section's best with 14 unanswered points.

"We score with 40 seconds running the ball. Still had two timeouts. I wanted to score and leave them no time, and I left them 40 seconds," Canepa said. "You got to give them credit. They went to Downey and beat them. Come here and play play us right to 40 seconds. They control the ball. That's what we do. Thank God we had it one more time than them I think."