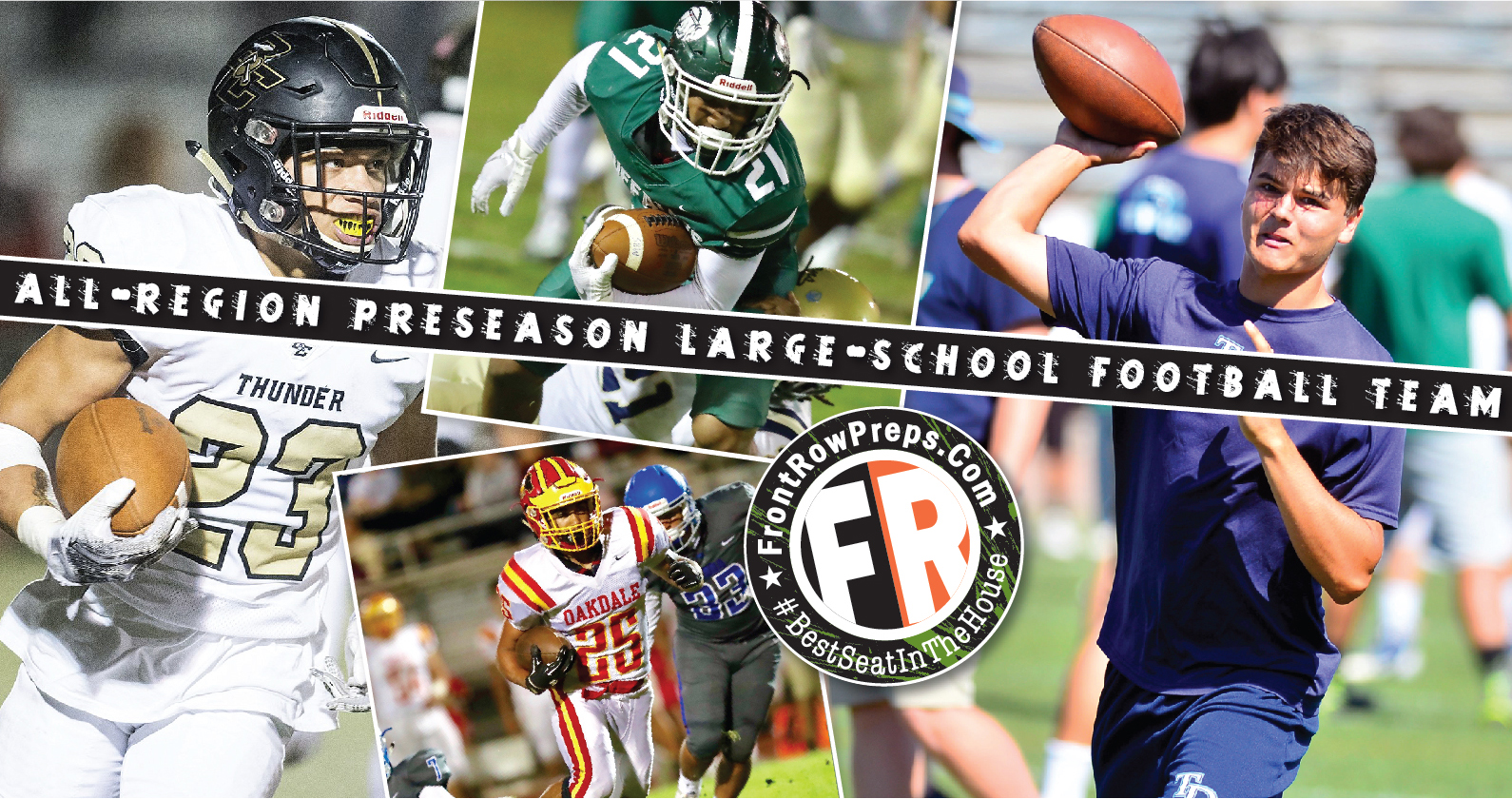 Dalton Durossette, Central Catholic: Completed 60.4 percent of his passes for 1,420 yards and 18 touchdowns. He should build upon those numbers with Sithri Price, Frank Clark and Nic Sani running wild in the secondary.

Bryce Gouker, Downey: Gouker began the 2018 season as the backup, but blossomed into one of the season’s breakout stars. He finished with 1,966 yards and 25 touchdowns, completing nearly 70 percent of his throws.

Trabron Russell, Manteca: With nearly twice as many carries in 2018, Russell rewarded the Buffalo coaching staff with a 1,320-yard season and 18 touchdowns. In two varsity seasons, Russell is averaging 8 yards per carry.

Nic Sani, Central Catholic: Sani missed almost all of the 2018 season with a shoulder injury, but he’s returned to the football field bigger and stronger. He will be a boon to the Raiders’ offense as a pass-catcher and additional blocker.

Jacob DeJesus, Manteca: The reigning Valley Oak League Offensive Player of the Year, DeJesus had 1,598 all-purpose yards and 20 touchdowns in 2018. Though he can affect games in multiple ways, he’s at his most dangerous running routes. He had 45 catches for 843 yards and 14 TDs.

Holden Baldwin, Turlock: Baldwin is tough miss -- or overthrow. The 6-foot-4 senior was named to the all-Central California Athletic League first team last fall and is on schedule for another big season. His confidence has been bolstered by a special attention from the University of San Diego.

Everett Johnson, Turlock: The top prospect in the region, Cal-bound Johnson is a mountain of a man at 6 feet, 7 inches and 312 pounds. He’ll anchor the Bulldogs’ big for a fourth consecutive league championship.

Owen Pena, Oakdale: The 6-foot, 200-pound junior was an all-VOL honorable mention last fall and, along with Diego Valdez, will be looked upon to open running lanes for Saffar and protect sophomore quarterback Jackson Holt.

Armando Palominos, Central Catholic: This 6-foot-3, 260-pound giant missed most of his junior season because of injury, but his return bodes well for the Raiders’ run-centric offense and senior Minaya Olivo.

Ralph Cordaway, Gregori: The Jaguars’ most talented player isn’t a skill player, per se, but this 6-foot-2 tackle. Cordaway was an all-CCAL performer a season ago and an annointed leader for first-year coach Lamar Wallace.

Adrian Melesio, Patterson: Melesio was named the All-Region large-school kicker last fall after making 9 of his 15 field-goal attempts, including a long of 54 yards.

Boss Foumai, Patterson: Foumai was named the Defensive Lineman of the Year in the Central California Conference as a sophomore. He was also a second-team all-conference selection as an offensive lineman.

Julius Lewis, Central Catholic: A 6-foot-5, 280-pound tackle, Lewis will command a lot of attention at the line of scrimmage, freeing up the Raiders’ edge rushers and linebackers to make plays at the ball.

Tamirr Bullock, Turlock: Bullock was named the CCAL’s Outstanding Defensive Lineman last fall and he’ll reprise his role as the Bulldogs’ best pass rusher.  On what some believed was a generational defense, he ranked among the leaders in sacks, forced fumbles and tackles for a loss.

Jayden Jackson, Turlock: One of Turlock’s top tacklers a season ago, the 6-foot-1 Jackson was named the CCAL’s co-Outstanding Linebacker and to the All-Region large-school team.

Cameron Snow, Oakdale: One of 22 new starters for the Mustangs a season ago, Snow developed quickly into a leader and was named to the all-VOL first team.

Garren Genilla, Manteca: A menacing presence at outside linebacker, the 6-foot-4, 208-pound senior had 58 tackles, 6.5 sacks and two fumble recoveries, including a 78-yard scoop-and-score against rival Sierra.

Youlas Dickson, Buhach Colony: One of the region’s top athletes, Dickson compiled 1,166 all-purpose yards, including 638 on the ground. Defensively, he’s picked off four passes in each of the last two seasons.

Sithri Price, Central Catholic: Another dynamic two-way threat, Price performed impressively on both sides of the ball during the Raiders’ run to a Valley Oak League title and Sac-Joaquin Section Division II finals appearance. Price had five interceptions, along with 530 receiving yards.

Bronson England, Downey: Dangerous in the return game, England’s role on both sides of the ball will expand in 2019. He was an all-CCAL defensive back last fall, but will be expected to help fill the void left by wide receivers Anderson Grover and Bryce Peterson.

Charles Jackson, Atwater: Though he was slowed by injuries, Jackson played through the pain, amassing 1,285 yards and 12 touchdowns. He averaged 9 yards per carry. Could see time in the slot this fall, as the Falcons take advantage of their depth at the running back position.