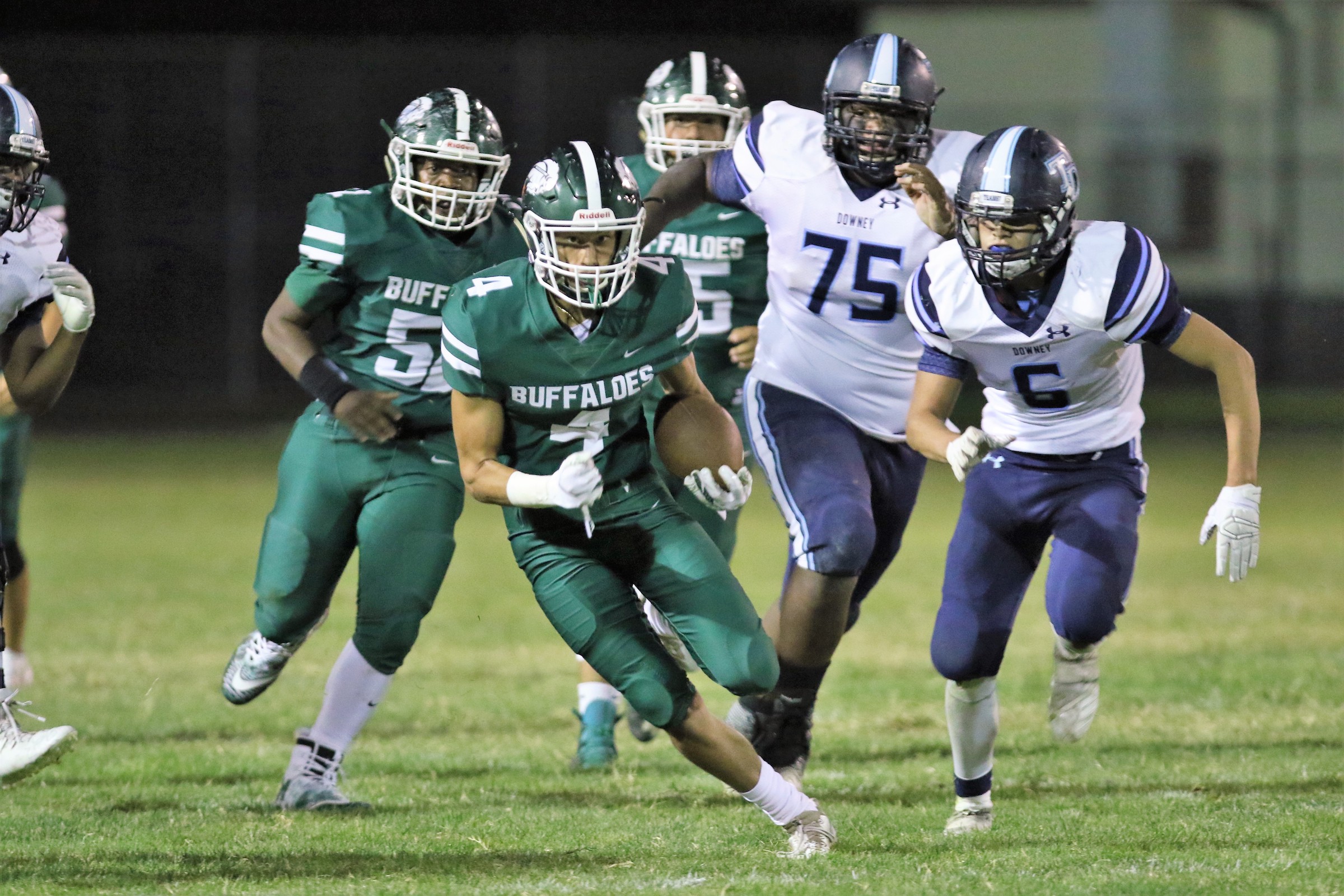 Manteca's Jorge Cedano is swarmed by the Downey defense in a 44-42 loss to the Knights on Friday, Aug. 24, 2018. (Sean Kahler Photography)

Large-school poll: Has the CCAL replaced the VOL as region's top league?

For years, the Valley Oak League has been the standard by which all other large-school leagues in the Front Row’s region have been measured.

With seven CIF State championships and 31 Sac-Joaquin Section banners, the VOL has earned that throne, but is their grip on the crown loosening with the arrival of the Central California Athletic League, a conference created during this latest realignment cycle?

The CCAL is comprised of Turlock, Pitman, Downey, Gregori, Modesto and Enochs. The Bulldogs were a two-time defending Central California Conference champion before the section lumped them together with the city of Modesto’s biggest and best, including perennial Modesto Metro Conference champion Downey.

Through two weeks, the CCAL is outperforming the VOL, which consists of four-time CIF State champion Central Catholic (granted, two of those titles were won while competing out of the Western Athletic Conference), Oakdale, Manteca, East Union, Sierra, Kimball and Weston Ranch.

The cumulative record for the CCAL is 7-5 with Downey and Pitman alone atop the early standings at 2-0. The VOL is 6-7 with six teams tied for the best mark at 1-1 heading into Friday’s games.

CCAL was better last Friday, too, winning four of its six games, including a head-to-head with the VOL. Downey edged Manteca with a last-second touchdown, a quarterback keeper by freshman Beau Green with 12 ticks left. With that loss, the VOL was just 3-3 for the week. What’s more the “Big Three” of Central Catholic, Oakdale and Manteca was 0-3. That factoid comes with a big asterisk, as well. Central Catholic was beaten by national No. 9 De La Salle, while Oakdale suffered its loss at the Honor Bowl to a West Catholic Athletic League side, Archbishop Mitty.

Here’s a closer look at this week’s large-school rankings:

1. (1) Central Catholic (1-1): The Raiders hung with De La Salle for three quarters and accomplished what even might Folsom could not — they scored on the Spartan’s blue-chip defense. Next: vs. St. Mary’s (0-1).

2. (5) Downey (2-0): The Knights supplant Manteca at No. 2 after winning a shootout victory over the Buffaloes. Downey not only delivered on the road, but in the clutch, too. Freshman Beau Green scored the game-winning TD with 12 seconds left. Next: vs. Merced (2-0).

3. (4) Turlock (1-1): The Bulldogs bounced back from a season-opening loss in a big way, throttling one of the best team in the state of Nevada in their home opener. San Diego State-bound defensive end Garrett Fountain had eight tackles and a forced fumble, while Tamir Bullock had two sack in the win over Reno. Next: vs. Tracy (2-0).

4. (2) Manteca (1-1): The Buffaloes wasted a record-setting performance by junior tailback Trabron Russell, who rushed for a school record 274 yards in the loss. Russell also found the end zone five times. Next: vs. Granada (2-0).

5. (7) Merced (2-0): Led by quarterbacks Dhameer Warren and Junior Garcia, the high-octane Bears have scored 91 points against quality opponents in the first two weeks. Garcia was 12 of 14 for 261 yards and two touchdowns as Merced racked up more than 450 yards of total offense in a win over Gregori. Next: at Downey (2-0).

6. (8) Pitman (2-0): Running back Jakob Partida set the school rushing record in a blowout of Lincoln. Partida carried the ball 21 times for 303 yards, breaking the previous mark of 273 held by Anthony Harding, who went on to play at Fresno State. It didn’t matter how many players the Trojans stuffed into the box. Next: at Pleasant Grove (0-2).

7. (3) Oakdale (1-1): The Mustangs struggled in every phase during a stunning 42-14 loss to Archibishop Mitty in the Northern California Honor Bowl. “It’s a process,” coach Trent Merzon told FrontRowPreps.com. Senior wide receiver/fullback Max Moore was credited with the team MVP by Honor Bowl broadcasters. Next: at El Capitan (0-2).

8. (6) B. Colony (1-1): The Thunder managed to control the game clock with their potent Fly offense, holding onto the ball twice as long as Tracy while rushing for 421 yards. But the defense had no answer for Logan Fife, who threw for 313 yards and four touchdowns in a 62-28 victory. Next: at Edison (1-1).

9. (9) Patterson (1-1): The Tigers were stung by one of the top private school programs in Sacramento, losing 49-7 to Capital Christian. The Cougars limited Patterson and sophomore running back Jordan Imada (13 carries, 42 yards) to just 164 yards of offense. The good news: The Tigers make their season debut under the palms this week against an old Western Athletic Conference rival. Next: vs. Los Banos (1-1).