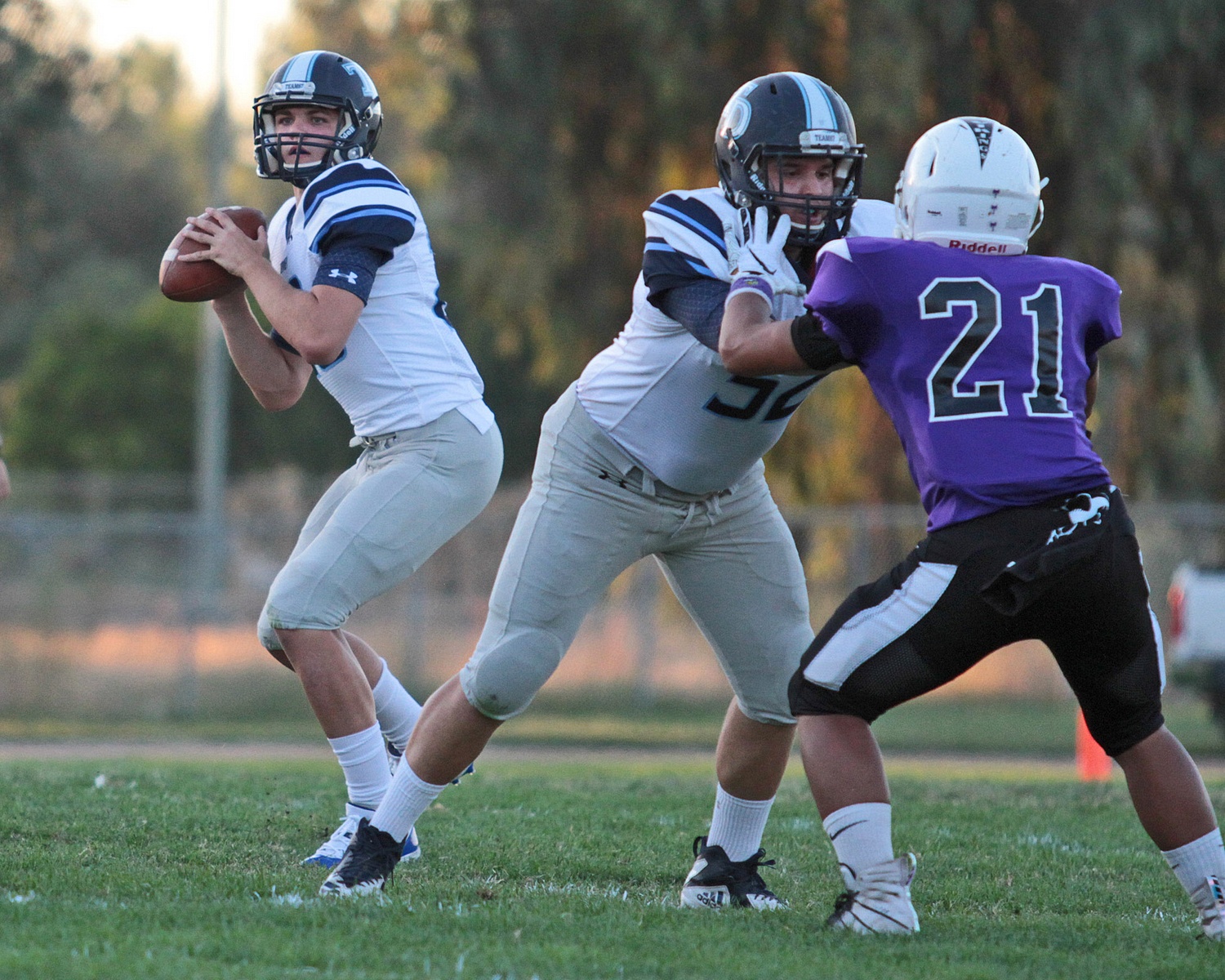 Downey freshman quarterback Beau Green threw four touchdown passes in the first half of a 82-6 victory at Johansen on Sept. 7, 2018. (Dan Harris)

Large-school poll: Hottest team in the region takes a turn in the hot seat

1. (1) Central Catholic (3-1): After playing one of the strongest nonconference schedules in the southern half of the Sac-Joaquin Section, Roger Canepa has learned a lot about his team through the first four weeks of the season. What he doesn’t know, though, is who will be the team’s full-time quarterback. Will it be returner Kyle Jackson, or transfer Dalton Durossette? That answer will likely be revealed Friday evening. Next: vs. Manteca.

2. (3) Merced (4-0): The Bears are 4-0 for the first time since 2007 and looking like the favorite in the Central California Conference, which begins this Friday. There isn’t a defense in the CCC that will hold dual-threat quarterback Dhameer Warren, do-everything wide receiver Xavier Stewart and the Merced offense to fewer than 30 points. Next: at Central Valley.

3. (4) Pitman (4-0): There’s seemingly a new hero each week for the surging Pride, which is looking to close out a perfect non-conference run this Friday against a Mother Lode stalwart. Last week, quarterback Treyton Fair took his turn in the spotlight. Fair threw for four touchdowns and 227 yards in a 31-28 win over Bullard. Next: vs. Summerville.

4. (5) Downey (3-1): Beau Green and Bryce Gouker combined for six touchdown passes as the Knights bounced back from their loss to Merced with a lopsided victory over Johansen. Downey's opponent on Friday should be considerably tougher. McClymonds is a giant among small schools in the Bay Area and the top team in the Oakland Section. Next: vs. McClymonds.

5. (2) Turlock (2-2): The Bulldogs haven’t shied away from competition, but have struggled mightily away from home. Turlock is 0-2 on the road after its latest defeat, a 41-28 loss at Sheldon of Elk Grove. In that game, the Bulldogs, who turned the ball over five times in a season-opening loss at Freedom of Oakley, gave up the first 21 points, creating a hole too deep to climb out out of. Next: at Central of Fresno.

6. (6) Oakdale (3-1): Max Moore scored the first and last touchdowns for the Mustangs, including a 36-yard run midway through the fourth quarter. That proved to be the difference against Chaparral of Colorado. Oakdale has won two straight heading into Valley Oak League play. Next: at East Union.

7. (7) Buhach Colony (3-1): Youlas Dickson rushed for 102 yards on just two carries and returned an interception for a touchdown as the Thunder won for the third time in four games. Buhach Colony forced four turnovers in the win. Next: vs. Patterson.

8. (8) Manteca (2-2): The Buffaloes channeled the frustration of a two-game losing streak into a head-turning performance against a heavily-favored opponent. Junior Jacob DeJesus scored three touchdowns, quarterback Ryan Ward bounced back from injury and threw for two more, and the defense stymied Tracy’s Logan Fife in a 54-18 win. Next: at Central Catholic.

9. (nr) Modesto (3-1): The Panthers make their debut in the large-school top-10 ranking after beating Patterson beneath the palms. Modesto had two running backs with at least 100 yards, including Daeveon Graves, who also had a pick-six interception and an 8-yard touchdown reception. Next: at Franklin (Stockton).

10. (9) Patterson (2-2): The Tigers trailed by 20 at the intermission, but cut Modesto’s lead to 34-31 on touchdowns by Javier Alvarado and Miguel Alvarez. That’s as close as Patterson would get, though, as its spirited rally fell short. Next: at Buhach Colony.

On the bubble: Gregori, Atwater, Pacheco.